This week more than 300 women who have faced abuse issued a warning of the growing threat to their rights by Sharia courts and parallel legal systems.
Also this week, One Law for All submitted devastating new evidence to the Home Affairs Select Committee Inquiry into Sharia Councils on how violence and gender inequality lie at the heart of the courts.
By permitting Sharia courts, Britain is clearly failing to meet its obligations to gender equality in the family as specified in the Convention on the Elimination of All Forms of Discrimination against Women.  Here are some examples:
DIVORCE
Men have unilateral right to divorce via the triple talaq rule, whilst women’s rights to divorce are limited.  According to the Islamic Sharia Council [now deleted but screenshot available here]:

The right of divorce is primarily with the husband in the Shari’a.

Even a civil divorce is only valid if the husband is the petitioner or consents to the divorce. Women seeking divorces without the consent of their husbands are labelled “hypocrites” (deleted now but a screenshot is available here) and accusations of “zina” or adultery is always the sub-text of any discussion on women’s “right” to divorce.
Testimonies gathered by One Law for All reveal the coercive nature of such threats over women who fear being ostracised and vilified for “dishonouring” the family or “community”. The celebrated “divorce services” that Sharia courts provide is really men’s rights being packaged and rebranded as women’s rights.
POLYGAMY

Amra Bone, above, the “first female judge” at Birmingham Sharia Council (who turns out to not even to be a judge but “a high official of a Shariah court second to a judge”) has been quoted as saying:

The government cannot ask Muslims not to have more than one wife. People have a right to decide for themselves.

Again, men’s right to have up to four wives is promoted as a “right” for the entire “community”. As many of our testimonies attest, however, polygamy has devastating effects for women and children. It’s abusive and a conducive context for violence against women and girls.
MARITAL RAPE AND SEXUAL ABUSE
Sharia courts justify marital rape. Maulana Abu Sayeed, chairperson of the Islamic Sharia Council, has said that marital rape is not an offence because:

Sex is part of marriage.

In another ruling on a woman who “refuses to respond to her husband’s sexual needs” because of “abuse in childhood”, the court advises the wife to read books such as the Ideal Muslimah, quotes hadith which says that women’s treatment of her husband decides whether she goes to heaven or hell, mentions that “The angels’ curse will befall every woman who is rebellious and disobedient” and that she must respond to her husband’s sexual urges even if she is “riding a camel”.
It then goes on to say:

After this advice, if your wife should persist upon not responding to your sexual needs then you should divorce her. This is because a woman who can not have conjugal relationship should not be married in the first place.

[Removed from their website but available via screenshot here.] CHILD CUSTODY AND DOMESTIC VIOLENCE
Sharia courts use child custody to exert pressure on women who have faced domestic violence and normalise violence against women.
In a documentary (Part 1 and Part 2), one woman who had secured a civil divorce was told by the Islamic Sharia Council that she would have to give up child custody to her ex-husband  (who had only been allowed indirect access to the children by the civil court).
Sharia judge Suhaib Hasan told one woman who had faced domestic violence:

I think you should be courageous enough to ask this question to him. Just tell me why are you upset huh? Is it because of my cooking? Is it because I see my friends huh? So I can correct myself.

Another woman who had been physically abused and her husband imprisoned for his violence, was told by the Dewsbury Sharia Council to go to mediation despite injunctions issued by a British court.
On the question of “What age is it suitable for children to live with the father” upon divorce, the Sharia court issued a ruling that the child must go to the father at a preset age, irrespective of child welfare rules [advice is no longer on their website but screenshot available here].
HIJAB
The Birmingham Sharia Council, amongst others, has also ruled:

In Islam hijab is compulsory and any woman who denies the ruling of hijab is disobeying her Lord and is rebelling against the Islamic law.

So much for the propaganda on the “right” and “choice” to veil.
WOMEN’S TESTIMONY
In the Sharia courts, a woman’s testimony is worth half that  of a man’s. The Islamic Sharia Council explains it in full here [deleted but available via screenshot] and concludes:

To deny the difference between the two genders is a denial of truth. Allah who created us, gave us rulings according to our nature. And all is well as long as we go by the nature.

CHILD MARRIAGES
There are hundreds of “child brides” every year – some as young as 6 – as well as a report that at least 30 girls, some as young as 9, being married under Sharia law in one London borough alone. Sharia courts say they do not marry children but according to their rules, a girls who has reached the age of nine and puberty is no longer a child.
APOSTASY
Nadia Sadiq, one woman who has submitted her testimony to the One Law for All Coalition, went before a judge at the Green Lane Mosque in Birmingham, which is a Salafi mosque where Abu Usamah has said women were created deficient and “whoever changes his religion, kill him“.
Habiba Jan, another woman who has submitted a testimony, went to a Sharia court judged by now-jailed Anjem Choudary who defends the death penalty for apostasy and stoning to death for adultery.
Even questioning the competency or relevance of Sharia courts is equated with “disbelief”,  a form of kufr, which is a serious “crime” [See Islamic Sharia Council position now deleted but screenshot available here].
TRANSNATIONAL ISLAMIST LINKS
Sharia courts are central to the Islamist project to control women and normalise the far-Right restructuring of society via the Sharia. In “Your Fatwa Does Not Apply Here: Untold Stories from the Fight Against Muslim Fundamentalism” Algerian American author Karima Bennoune speaks about the commonalities of various fundamentalists as believing:

In the imposition of ‘God’s law’, something called the Sharia – their version of it rather than others’ – on Muslims everywhere, and in the creation of what they deem to be Islamic states or disciplined diasporic communities ruled by these laws.

According to Elham Manea, the author of Women and Sharia Law: The Impact of Legal Pluralism in the UK, Sharia courts grew out of an Islamist agenda with clear connections with transnational Islamist groups.
The founding organisations of the Islamic Sharia Council which is often promoted as the oldest, biggest and “best” of the courts clearly highlights these links:
• London Central Mosque and Islamic Cultural Center (Trustees include officials from the governments of Pakistan, Saudi Arabia, UAE, Brunei, Qatar, Egypt, Yemen, Jordan. Ahmad Al-Dubayan who gave oral evidence at the Home Affairs Select Committee as the Chairman of the UK Board of Sharia Councils which aims to “regulate” the courts is Director General)
• Muslim World League (propagates Saudi Wahabbism, the Muslim Brotherhood)
• Markazi Jamiat Ahl-e-Hadith (involved in promoting sectarianism and jihad in the Indian sub-continent)
• UK Islamic Mission (inspired by Jamaat e Islami and Syed Abul Ala Maududi and shares the same ideology as Hamas and Muslim Brotherhood)
• Dawatul Islam, UK (UK branch of the Bangladeshi Jamaat e Islami implicated in running death squads and organising lynchings against people demanding independence)
• Muslim Welfare House, London (founded by Kamal Helbawy of the Muslim Brotherhood who has praised Osama Bin Laden. They have fatwas defending polygamy and prohibiting Muslim women from marrying non-Muslim men as well as campaigned to stop the selling of alcohol)
COURTS OR BENIGN MEDIATION BODIES?
The term Sharia itself means law. The bodies are set up as courts. Those presiding call themselves judges and issue what is often considered by the judges, women themselves and the wider community as binding religious law with regards family matters. Most importantly, they call themselves courts.
See for example the Islamic Sharia Council website. In the “About Us” section, it says [screenshot in case it is deleted]:

A group of concerned Muslim scholars and field workers… decided to establish ‘The Islamic Shari’a Council’ to be a quasi-Islamic Court.

The Birmingham Central Mosque says on its website [screenshot in case it is deleted]:

Birmingham Central Mosque is the only Islamic institution in Britain in which a woman has been elected as a high official of a Shariah court second to a judge.

According to Pragna Patel, above, Director of Southall Black Sisters:

Muslim fundamentalists have mounted what can be described as a two pronged pincer like manoeuvre based ostensibly on the demand for religious tolerance, but which is in reality a bid for power in which the control of female sexuality is central.
On the one hand they seek to ensure that personal religious codes are normalised within the legal system, and on the other they seek to formalise a parallel legal system through the establishment of alternative religious forums for dispute resolution in family matters. This process – a sort of ‘shariafication by stealth’ of the legal apparatus – involves making state law and policy ‘Sharia’ compliant’.

Despite all efforts to repackage and rebrand the courts, including by Islamic feminists, Sharia courts represent a concerted attempt by Islamists to normalise the denial of women’s rights in the family and gain further influence.
Clearly, Sharia courts are not compliant with either British law or international human rights treaties. By undermining British legal principles of equality before the law, the universal concept of one law for all and the protection of the rights of women and children, these courts help to increase discrimination, intimidation and threats against the most vulnerable.
By accommodating them, the government is itself in breach of its obligations.
The law and not religion must be the key basis for securing justice for all citizens.
Support One Law for All’s work in calling for the dismantling of parallel legal systems and for the promotion of equal rights. #OneLawforAllBecause #StruggleNotSubmission.

December 15, 2016 Muslim student charged over fabricated Islamophobia claim
Recent Comments
5 Comments | Leave a Comment
Browse Our Archives
get the latest from
The Freethinker
Sign up for our newsletter
POPULAR AT PATHEOS Nonreligious
1 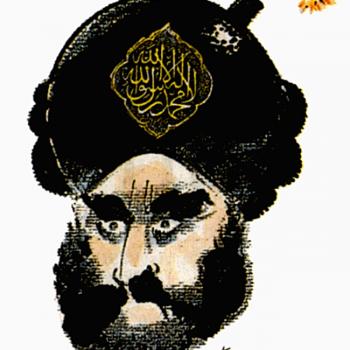 Nonreligious
Atheist who sparked riots with a Mohammed cartoon...
The Freethinker
TRENDING AT PATHEOS Nonreligious