Moronic Muslim leaders in the Maldives put so much pressure on the authorities that police moved in to destroy sculptures at an amazing water installation created at the Fairmont Maldives Sirru Fen Fushi resort by British artist Jason DeCaires Taylor.

Outgoing President Abdulla Yameen recently ordered the destruction of the human figures – a key feature of the Coralarium – declaring them to be “idols”.

He insisted there was “significant public sentiment” against the artwork. Islam is the official religion of the scattering of coral islands deep in the Indian Ocean. Hardline Islam rejects any man-made depiction of the human form.

I was extremely shocked and heartbroken to learn that my sculptures have been destroyed by the Maldivian authorities at the Coralarium, despite continued consultations and dialogue. The Coralarium was conceived to connect humans to the environment and a nurturing space for marine life to thrive.

The figures were fixed to a tidal reef within swimming distance of the hotel. It was intended to serve the dual purpose of tourist attraction and refuge for sea life. An illumination system lit it up at night to create both an otherworldly experience, and highlight the thriving underwater environment.

Local police posted pictures to social media of themselves using pickaxes and power tools to remove the statues.

Fairmont Maldives, the owner of the resort, issued a statement:

While we are very surprised by the sudden removal of eco-art pieces by the authorities we respect the people, traditions and customs of the Maldives. The removal process of the installed artwork was peaceful and friendly without interruption to our world famous service. The Coralarium gallery structure and the tree lined underwater coral boulevard remains intact, ensuring the coral restoration program remains alive and well.

We have initiated immediate plans for the next exhibit, creating a new attraction within the Coralarium gallery. 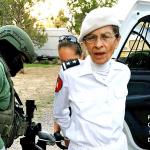 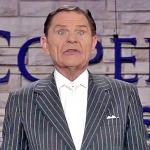 October 1, 2018 Second evangelical book about Donald Trump is due out soon
Recent Comments
5 Comments | Leave a Comment
Browse Our Archives
Follow Us!