US Pastor says climate change is ‘imaginary’ but God is real

TRUMP-worshipping pastor Robert Jeffress, above, this week gave some advice to the passionate and articulate climate change activist Greta Thunberg: read the Bible and stop worrying about the ‘imaginary crisis’ of global warming because God has promised never to destroy the world with rising sea levels.

The imbecile had just swished out of Trump’s “religious freedom” conference at the UN headquarters in New York, and was clearly on a high when he appeared on the Todd Starnes radio programme.

He kicked off by bragging that he had just come “from hearing our tremendous President give a blockbuster speech” at the United Nations.

It was absolutely tremendous. The only thing more fun than listening to him is listening to the liberals whine that he had the audacity to skip the climate summit. I tell people all the time, ‘This President is brilliant’. He decides to skip attending a session on an imaginary crisis – climate change – and instead he chooses to lead his own conference on a very real problem, global persecution.

There is nothing to it. They may as well hold a commission hearing on the Tooth Fairy or Bigfoot.

Well, actually they did. It was called the “Global Call to Protect Religious Freedom”.

God said he created the environment to serve us, not for us to serve the environment. This Greta Thunberg, the 16-year-old, she was warning today about the mass extinction of humanity. Somebody needs to read poor Greta Genesis chapter 9 and tell her the next time she worries about global warming, just look at a rainbow; that’s God’s promise that the polar ice caps aren’t going to melt and flood the world again.

Just how deranged is Jeffress?

RationalWiki gives us this:

Robert James Jeffress Jr. (1955–) is a fundamentalist Baptist pastor at the First Baptist Church of Dallas, Texas. He exemplifies the fundie preacher using hate mongering to keep his flock attentive and fearful. His biggest wet dream is to convert his specious relationship with President Trump into lawful persecution of gross gay sex and a fetus-murder-ban.

In September 2015, Jeffress was one of the first evangelicals to support Trump in his candidacy in the 2016 U.S. presidential election. For this and for his universal bigotry, Jeffress was rewarded with a position in the White House Faith Initiative.

Jeffress claims that the Initiative members only pray for Trump on an “as needed” basis, but given that Trump sins 24/7, that must be a fuck of a lot of praying.

Jeffress is an exemplar of a Christian adopting the ‘ends justify the means’ over everything else. When asked why evangelicals should support the very adulterous Trump, he pointed out that right-wing saint Ronald Reagan was an adulterer too, but it didn’t matter, because policies. Jeffress even held a pseudo-Trump rally with full religious pretense including an angelic choir chanting a choral ‘Make America Great Again’. 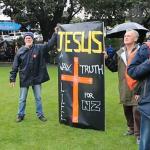 September 24, 2019
Good news: Christianity in NZ is fast heading towards extinction
Next Post 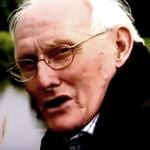 September 25, 2019 Bus company that gave millions to Christian charities goes belly-up
Recent Comments
12 Comments | Leave a Comment
Browse Our Archives
get the latest from
The Freethinker
Sign up for our newsletter
POPULAR AT PATHEOS Nonreligious
1