UK PRIEST Fr Matthew Jolley, 32, above, has received a jail sentence of over three years for conspiring with an undercover cop to ‘do’ a boy of two.

Jolley was duped by the officer he first approached on the Grindr dating app in September. It took the priest less than 20 minutes to tell the officer – posing as a 36-year-old bisexual man – that he was sexually interested in young children.

Over the course of a number of depraved chats, Jolley, 32, admitted while he mainly liked girls, a “cute” boy would also be of interest. After telling the police officer he wanted to “do his two-year-old son” – who did not exist – the priest then sent an indecent image of himself.

The lurid conversation shifted from Grindr to Kik Messenger and later to Wickr – an encrypted platform for private chats. In these chats, Jolley revealed his sick fantasy of “sharing” the child with his dad.

Liverpool Crown Court heard Jolley began communicating with the officer while based in Belgium but planned to return to the UK for two weeks before travelling to Rome in October. On 26 September he arranged to meet the cop at a home in Halton, Cheshire.

When the priest arrived Jolley described what he wanted to do to the child – completely oblivious to the fact he was talking to an undercover officer. When the officer revealed his true identity the priest tried to make a run for it but was tackled to the ground and arrested.

On Friday, Jolley from Great Sankey, Warrington, was jailed for three years and four months and placed on the sex offenders register for life after pleading guilty to arranging the commission of a child sex offence.

Judge recorder Jeremy Lakser condemned the actions of the priest and told him:

It cannot be said it was an aberration, it was something you considered at length over a time. During that lengthy period it progressed so far as you believed almost to fruition. You are an ordained priest in the Catholic church.

I do not impose a more severe sentence for that reason but it goes without saying, although I do say it, that your words and actions and intentions seem to me to be wholly inconsistent with the teachings of the Catholic church and you have done nothing but a great disservice to the church.

Following the sentencing, Detective Constable Louise Murphy praised the work of the task force which brought the predatory priest to justice. She said:

Through his online communications it was clear to see that he was sexually attracted to young children and would do whatever he could in order to fulfil his own sexual gratification.

I would like to take this opportunity to thank the undercover law enforcement officers who have been instrumental in building the case against Jolley. This case shows how well agencies can work together in order to protect the most vulnerable people in society. It also sends a clear message that anyone who commits such offences are not above the law and they will be brought to justice, regardless of who they are and what they do.

Meanwhile, it’s reported from Ireland that an ex-Catholic priest – paedophile Oliver O’Grady, 74, above – has been arrested in Portugal.

The ex-priest was nabbed under a European Arrest Warrant on the Algarve and is expected to be sent back to Ireland.

Sources say it may relate to a complaint made by an organisation dealing with child abuse who tipped off the authorities.

Portugal’s Policia Judiciaria confirmed they arrested him on Monday.

O’Grady was jailed for three years for possession of large amounts of child pornography in 2012. The images were found after the defrocked priest left his laptop on an Aer Lingus flight. The victims were as young as two.

He also raped and abused at least 25 children in California and was the subject of a 2006 documentary film called Deliver Us From Evil.

Limerick-born O’Grady emigrated to the US in 1971, after being ordained, and served as a priest in  California.

In 1984, O’Grady  admitted to local detectives that he had molested children. But when “lieutenants” of Roger Mahony, above, who was then bishop of the Diocese of Stockton, promised to put O’Grady into therapy and keep him away from children, the detectives halted their investigation.

O’Grady went on to assault dozens of children across the Central Valley before he was finally convicted in 1993. By then, Mahony was a cardinal for the Archdiocese of Los Angeles, where he presided over more paedophile priests.

He was was jailed for 14 years for abusing two young brothers.

Last year a petition was launched calling for the removal of  Mahony’s red hat, withdraw him from active ministry and criminally charge him with covering for 34 alleged clerical sex abusers.

John Paul Norris, who launched the petition,  said the cardinal:

Controls the gay mafia and he needs to go.

The petition got nowhere. Mahoney, though now retired, still holds  the titles of Cardinal and Archbishop Emeritus of Los Angeles and retains his Vatican appointments. 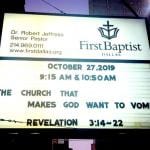 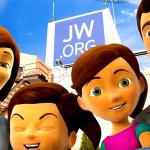 October 28, 2019 Op-ed: Intruders
Recent Comments
12 Comments | Leave a Comment
Browse Our Archives
get the latest from
The Freethinker
Sign up for our newsletter
POPULAR AT PATHEOS Nonreligious
1