LAWYERS must unite to take a stand against secularism, which poses a grave threat to Christian-based morality in America.

That was the gist of a “religious freedom” speech given by US Attorney General William Barr, above, to Notre Dame law students in South Bend, Indiana, yesterday (Friday).

Barr, a “devout Catholic”,  claimed that an “assault” on organised religion by secularists has created a host of societal ills – especially the breakdown of the families  – and lawyers must fight against them in Congress, legislatures and the courts.

We must be vigilant to resist efforts by forces of secularization to drive religious viewpoints from the public square and to impinge upon our exercise of our faith.

Barr, invited to speak at the law school by the university’s de Nicola Center for Ethics and Culture, said the nation’s founders were Christians who thought religion was “indispensable” to a free democracy. But over the past 50 years, the Judeo-Christian moral values upon which the nation was founded have increasingly come under attack by secularists.

By any honest assessment the consequences of this moral upheaval have been grim. Virtually every measure of social pathology continues to gain ground. Along with the wreckage of the family we are seeing record levels of depression and mental illness, dispirited young people, soaring suicide rates, increasing numbers of alienated young males, an increase in senseless violence and the deadly drug epidemic.

Barr said the “micro-morality” of Christianity, in which people seek to transform the world by first transforming their own personal conduct and morality, is increasingly giving way to modern secularists’ “macro-morality,” in which people instead focus on political causes and collective action.

This system allows us not to worry so much about the strictures on our own private lives because we can find salvation on the picket line. We can signal our finely tuned moral sensibilities by participating in demonstrations on this cause or that.

If Barr wanted to provide evidence that “destructive secular forces” were threatening America’s Christian values he could have pointed to more than 100 protesters who congregated near the venue and blew whistles, acknowledging the whistleblower complaint that has led to an inquiry by the Democrat-led US House on whether to impeach Trump.

Some protesters held signs with phrases, “Disbar Barr”, “Abolish ICE”, “Families Belong Together” and “Impeach Both of Them” while blowing their whistles.

In response to the protesters, some passers-by stopped to shout “Make America Great Again.”

Chuck Elum, of Mishawaka, attended the protest with handwritten signs on torn cardboard boxes. One had the words “Barr behind bars”. He said:

The Attorney General should be serving the people of the country, not the President.

Barr did not mention the impeachment inquiry during his talk and he declined to take questions from reporters, a Department of Justice policy for such visits.  Reporters were required to leave the law school’s McCartan Courtroom before Barr fielded questions from law students. 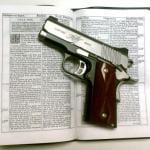 October 11, 2019
Would you like a Bible, a gun and a flag with your new vehicle?
Next Post 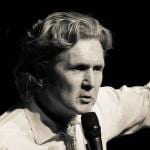 October 12, 2019 UK pastor accused of fiddling church funds loses his sacking appeal
Recent Comments
35 Comments | Leave a Comment
"Still, with great chords and vocal harmonies . ."
vortexau Devout Catholic businessman claims Trump is ..."
"yeah it was a setup, its all coming out in court. They were literally banned ..."
Dana W Trump addressed crowd from stage resembling ..."
"Best/worst part of Cruz's Cancun fiasco.... he tried to blame his own poor judgement and ..."
S. Arch Op-ed: Oh, how they laughed when ..."
"If any thing actually comes of these investigations, I will be surprised. Just a bad ..."
Thomas Brown Op-ed: Oh, how they laughed when ..."
Browse Our Archives
get the latest from
The Freethinker
Sign up for our newsletter
POPULAR AT PATHEOS Nonreligious
1