THE religious news site Faithwire (motto: ‘Inform. Challenge. Inspire.’) reports that a newly-found fossil snake ‘backs up Genesis‘, as the fossil ‘indicates snakes had legs’. The Jerusalem Post similarly teases its readers with the headline ‘Is the Bible right? Newly discovered fossils show snakes had legs‘.

The fossil in question, of a snake-like creature called Najash, certainly suggests that snakes once had hind limbs, but hardly “backs up” the Genesis account – indeed, the fossil refutes it.

Let’s suppose, for the sake of argument, that Satan was the first snake (or in some sense “inhabited” the first snake’s body), and that this first snake lost its legs as a result of having been cursed by God. That first snake, would (in the unlikely event of being fossilised) have yielded a legless fossil, not one possessing legs!

To slither out of this embarrassing scenario, Creationists presumably suppose the cursed snake to have retained at least one pair of limbs immediately after the curse, but lost the use of its legs for the purposes of locomotion.  But just stop and think for a moment about how contrived an explanation this is.  Just picture the scene.  You’re God, about to smite the serpent with a curse described in Genesis 3:14:

Cursed are you above all livestock and all wild animals! You will crawl on your belly and you will eat dust all the days of your life.

Recall that we’re looking for an explanation as to why modern snakes crawl on their belly, and we’re also seeking an explanation as to why snakes no longer possess noticeable legs.  The obvious way of explaining both the change of gait and the loss of legs would be to couple the two, and claim that the serpent moves on its belly because its legs were lost.

But then we’d arrive at the problem noted earlier, namely that the fossil of a snake so cursed ought to lack legs, not possess them.  So Creationists propose, apparently with a straight face, that God removed the forelimbs first, then over the generations, went on to remove the hind limbs also.  So the fossil that Creationists are now touting as evidence for Creationism is, by their own admission, a transitional form!  Oh, the irony!  The nature of this change sounds suspiciously gradual – almost as if  – perish the thought! – the leglessness evolved?

The thought experiment engaged in above, involving talking snakes, is of course impossible for any fair-minded person today to take literally.

Young Earth Creationists claim most fossils were deposited as a result of Noah’s Flood; the fossil snakes, in contrast, are described by researchers as coming from :

A sandy succession that is considered to represent the interaction between fluvial and aeolian [river-borne and windborne] accumulations on the fringe of a large erg [flat area of desert], the Kokorkom Desert.

This fossil, far from confirming the Genesis account, supports the predictions of evolutionary theory. Most reptiles today have four limbs, implying “having four legs” to have be the ancestral condition for reptiles, and the leglessness of modern snakes to be a derived or evolved trait.

Some snakes today (pythons and boas) still possess small hind limbs.  These limbs don’t resemble legs to the naked eye, and are far too small to play a role in locomotion. The limbs are known as pelvic spurs, and tend to be longer in males than in females; males use their spurs for “clasping and tickling during courtship and mating“. If God truly wanted to curse snakes, one can’t help but wonder why some male snakes are allowed to retain the use of their hind limbs in this fashion!

The New York Times summarises the genuine significance of the Najash fossil thus:

Scientists have not found fossils of the snake family’s four-legged ancestors, though they are certain these tetrapod forebears existed. The new study suggests that those mysterious proto-snakes probably lost their forelimbs early in snake evolution, at least 170 million years ago. But the back legs stuck around for tens of millions of years.

That means that hind-legged snakes, such as the Najash group, did not represent a short-lived evolutionary phase. Instead, snakes retaining two of their legs were a successful body plan that sufficed for eons until most snakes transitioned into fully limbless slitherers during the latter half of the Cretaceous period.

How is “a successful body plan that sufficed for eons” consistent with a curse? It isn’t. As The New York Times rightly says in conclusion

Their extraordinary variety in our modern world – from noodle-width threadsnakes to venomous vipers to behemoth pythons – is a testament to the success of their unique heads and serpentine bodies.

Snakes aren’t the only vertebrates to have lost their legs. Slow-worms superficially resemble snakes, but are a type of legless lizard. Skinks are a diverse family of lizards in which the legs tend to be reduced, or even lacking altogether.  The Mexican Mole Lizard, above, is a type of Amphisbaenian or worm lizard. The Mole Lizard superficially resembles an earthworm, but has forelimbs, and is more closely-related to lizards than it is to snakes.

Moving away from reptiles, caecilians outwardly resemble earthworms or snakes, but are actually a type of legless amphibian. In that case also, fossils such as Eocaecilia document evidence of descent from ancestors with legs. There’s that pesky evolution again!

One of the most popular arguments for God’s existence is the Argument from Design. But if the leglessness of skinks, slow-worms and caecilians constitutes “good design”, why suppose the snake to be “cursed above all livestock and all wild animals?” Conversely, if slow-worms and caecilians are actually cursed in the same manner that Genesis claims snakes are, what, pray tell, did the first slow-worm do wrong in the Garden of Eden – and why does Genesis make no mention of caecilian sin?

There’s a perfectly simple reason why the writers of Genesis once thought that the first snake had legs. The writers knew nothing of evolution, and attributed everything to a perfect creator.  But they found themselves in a very imperfect world – a world in which they had to work hard for living, and a world  compete with venomous snakes, which, to coin a phrase, move in a mysterious way.

So the writers made up a story – one that could act as bridge between the perfect being that they imagined God to be, and the decidedly imperfect world in which we find ourselves. The only problem (and it’s a big one) is that the story they arrived at isn’t true. And if someone today tries to tell you otherwise – that a newly-discovered fossil backs up the Genesis narrative – I think they’re pulling your leg. 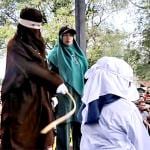 December 2, 2019
Six jailed in Malaysia for picnicking instead of praying
Next Post 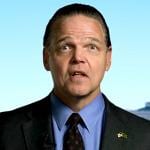 December 3, 2019 US Ambassador to Zambia gets a taste of hateful Christian values
Recent Comments
18 Comments | Leave a Comment
Browse Our Archives
Follow Us!