There is no liberty but Falwell’s liberty

There is no liberty but Falwell’s liberty March 30, 2020 Ophelia Benson 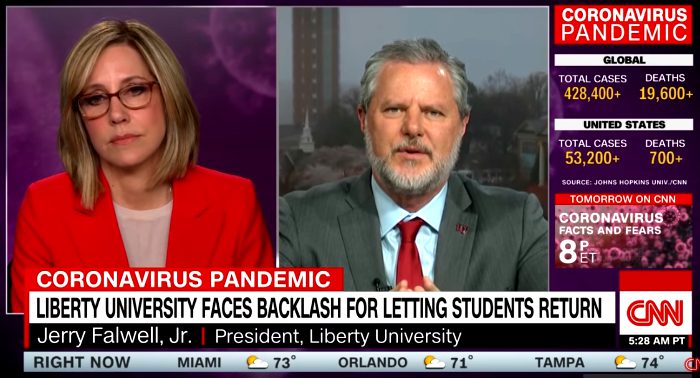 Jerry Fallwell 2, the President of the Bible college winsomely named ‘Liberty University,’ asked the doctor who runs the ‘Liberty’ health service if it would be a terrific idea to let the students return from their spring break despite the threat of COVID-19. The New York Times has details:

“We’ve lost the ability to corral this thing,” Dr. Thomas W. Eppes Jr. said he told Mr. Falwell. But he did not urge him to close the school. “I just am not going to be so presumptuous as to say, ‘This is what you should do and this is what you shouldn’t do,’” Dr. Eppes said in an interview.

Very humble, very Christ-like, very deferential, but not very sensible. He’s the doctor, he’s in charge of the health service, Falwell asked him – so he should have continued from “We’ve lost the ability to corral this thing” to “so it would be criminally reckless and negligent to let the students return, so you should not do that.”

But he didn’t, so Falwell threw open the Bible college.

And then a miracle occurred.

As of Friday, Dr. Eppes said, nearly a dozen Liberty students were sick with symptoms that suggested Covid-19, the disease caused by the virus. Three were referred to local hospital centers for testing. Another eight were told to self-isolate.

Does Jesus not take care of his own? What went wrong?

For critical weeks in January and February, the nation’s far right dismissed the seriousness of the pandemic. Mr. Falwell derided it as an “overreaction” driven by liberal desires to damage Mr. Trump.

Ah yes, those foolish “liberal” desires to damage Trump, by which they mean: prevent Trump from killing everyone on the planet.

It’s not quite as simple as liberals versus Trump, though. For one thing, Liberty U is in a city. The people of Lynchburg, Virginia don’t all want to be sacrifices in Falwell’s war on the Librul Ayleets.

The city of Lynchburg is furious.

“We had a firestorm of our own citizens who said, ‘What’s going on?’” said Treney Tweedy, the mayor.

Just because he’s set up a coronavirus petri dish in her city. Some people are so fussy.

Meanwhile people trapped behind the walls of “Liberty” are terrified.

“I’m not allowed to talk to you because I’m an employee here,” one student living on campus wrote in an email. But, he pleaded, “we need help to go home.”

That’s liberty for you – being forbidden to talk to reporters while your employer/university keeps you prisoner during a pandemic.

Under the Falwell family’s leadership, Liberty University has grown in five decades from a modest Baptist college to an evangelical powerhouse with cash investments and endowments of nearly $2 billion, nearly 46,000 undergraduates and a campus that sprawls across Lynchburg and neighboring counties in Virginia.

Two billion dollars – that’s a nice chunk of change. Does some of it come from ransoms paid to let students leave?

Mr. Falwell runs Liberty his own way, and his word is law. Professors are not tenured and can be fired at will. The administration controls the student newspaper.

Lynchburg is particularly ill-prepared to become a hot spot. Hospitals in the region have a total of 1,174 beds, only 55 of them intensive care, according to a recent analysis by the Harvard Global Health Institute. Those must serve 217,000 adults, nearly 50,000 of whom are 65 or older. Tests for the coronavirus remain in short supply.

Well, boring unimaginative secular people think that kind of thing matters but to a Believer it’s just a couple of random numbers. God will provide.

Politico reports that people in Lynchburg are seriously pissed off.

“Remember when people wanted to tar and feather folks? That’s about the level it’s at in the Lynchburg community right now,” a former longtime Falwell associate told me over the phone. “You have … 16,000 petri dishes he’s inviting back to Lynchburg, who have gone out all over country for spring break—he’s inviting them back into our city, our community, knowing that at some point they’re gonna have to interact with the public.”

Yes but it’s worth it for the sake of The Divine Donald.

Falwell has said this decision was in students’ best interests—that students would be better off if they returned to campus before the coronavirus spread—but that suggestion has met with exasperation by public health experts, state and local officials, and many residents of Lynchburg.

As President Donald Trump pumps out messages that fears of the coronavirus are overblown, and Americans try to square that with their local regulations and personal worries, Liberty has become an even more intense version of the national conflict, with students and faculty left trying to weigh their own interests against a defiant leadership with a constantly pivoting message – in this case, a person who is used to having total control of the institution.

That’s what Falwell and Trump really have in common. It’s nothing to do with Jesus, it’s all about authoritarianism. There will be One Big Dude and he will tell everyone what to do, end of story. None of this left-wing discussion and thinking and giving reasons crap, it’s just one man giving orders and everyone else taking them. What could go wrong?

For people who’ve traveled in Falwell’s orbit, the decision is classic Jerry.

“He doesn’t think anyone should be able to tell him what to do, and he’s going to do whatever he wants,” a former Liberty University executive told me.

“He’s very defiant,” said another longtime Falwell associate with close ties to the Falwell family. “It’s very much in his character. That’s a family trait. His father was the same way.”

Combine that with being a complete jackass and you’ve got yourself a problem.

March 29, 2020
Godly Belarus 'dictator' shrugs off pandemic; says it's a 'psychosis'
Next Post

Nonreligious
Runaway sex offender surfaces as a minister at...
The Freethinker
TRENDING AT PATHEOS Nonreligious