Atheist fails in bid to remove God from US oath of allegiance April 6, 2020 Barry Duke

A LAWSUIT launched in 2017 by French immigrant Olga Paule Perrier-Bilbo to have ‘so help me God’ removed from the oath of allegiance has just been tossed by the US Court of Appeals for the First Circuit.

So the naturalisation oath for US citizenship will continue to include the words “so help me God.”

When the case was first brought in 2017 by Perrier-Bilbo, who came to the US in 2008, legal analyst Lionel Nation homed in on a section of the lawsuit which says:

By its very nature, an oath that concludes ‘so help me God’ is asserting that God exists. Accordingly, the current oath violates the first ten words of the Bill of Rights, and to participate in a ceremony which violates that key portion of the United States Constitution is not supporting or defending the Constitution as the oath demands.

It referred to clause that says:

Congress shall make no law respecting an establishment of religion, or prohibiting the free exercise thereof.

Nation said she was absolutely right to mount the challenge, and explained why in the video below:

But the court disagreed:

We follow the Supreme Court’s most recent framework and apply American Legion’s presumption of constitutionality to the phrase ‘so help me God’ in the naturalization oath because we consider the inclusion of similar words to be a ceremonial, longstanding practice as an optional means of completing an oath.

And because the record does not demonstrate a discriminatory intent in maintaining those words in the oath or ‘deliberate disrespect’ by the inclusion of the words, Perrier-Bilbo cannot overcome the presumption.

The phrase “so help me God” is optional in the Oath of Allegiance of the United States, which reads:

Some Democratic leaders of several key committees have dropped the phrase “so help me God” from a swearing-in oath for individuals testifying before them.

Last May Democrat Represenative Steve Cohen of Tennessee, chairman of the Judiciary Committee’s Subcommittee on the Constitution, Civil Rights and Civil Liberties, said:

I think God belongs in religious institutions: in temple, in church, in cathedral, in mosque – but not in Congress

What Republicans are doing, he argued:

Is using God. And God doesn’t want to be used.

This infuriated evangelist Franklin Graham, who blasted the move as “backward.”

He said in a series of tweets:

Why has the Democratic Party turned its back on God? We need more of God, not less! What @RepCohen is suggesting is what Communism did in Eastern Europe & is still doing in places around the world like Cuba. Communism only allows worship inside approved churches.

God is our Creator & the maker of the universe. He is present everywhere; He is not limited to churches or temples. The root of the issue is that many politicians don’t want God in any part of their politics or our country’s business because His standards condemn their sins. 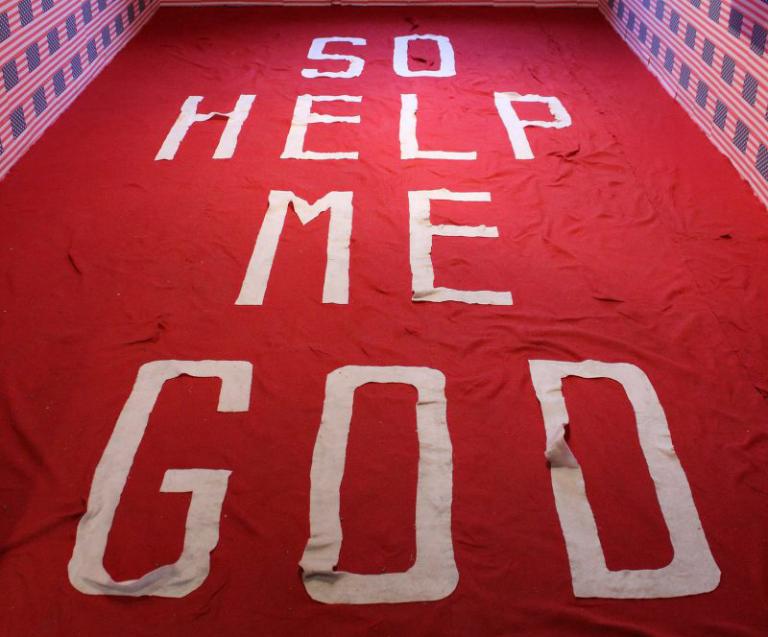 In 2016 the Napoleon galley in Philadelphia hosted an installation by France- and Spain-based artist Pierre Valls. It included the above in the gallery’s doorway. Writing for Artblog Chip Schwartz said of Valls powerful critique of the military-industrial complex:

Covering the entire floor, a red and white felt-cutout carpet reading ‘So help me God’ harnesses the language of oaths in the United States to place the exhibit in a specific legal and psychological context. Used by jurors and witnesses, public officials and military enlistees, the phrase has a longstanding tradition as a means to assert and justify the oath taker’s duty. The phrase also introduces a level of God-fearing into the process, regardless of the particular (if any) religious inclination of the oath taker.

April 7, 2020 Trump's fake claim: all Americans are praying for Boris Johnson
Recent Comments
10 Comments | Leave a Comment
"https://uploads.disquscdn.c..."
Minh Dao Jailed: ‘Bishop’ who argued her ministry ..."
"Isn’t she a few decades too young to be a nun. And wait - there ..."
Matt G Catholic Church stunned by trans woman ..."
"Thanks. I had read some bits about him over the years and he had never ..."
democommiescrazierbrother Distant tribe thought Philip was a ..."
"The motherfuckingnannyfilterfromHELLLLLLLL! is a device of evil inchoate."
democommiescrazierbrother Distant tribe thought Philip was a ..."
Browse Our Archives
get the latest from
The Freethinker
Sign up for our newsletter
POPULAR AT PATHEOS Nonreligious
1