Trump’s fake claim: all Americans are praying for Boris Johnson

THE defining characteristics of the US President are narcissism, stupidity, mendacity, arrogance, deception and – as he  demonstrated yesterday when he said all American are praying for COVID-19-stricken Boris Johnson – shameless fabrication.

He began his daily press briefing by saying:

Before we begin I want to express our nation’s well wishes to Prime Minister Boris Johnson as he wages his own personal fight with the virus. All Americans are praying of him, he’s a friend of mine, he’s a great gentleman, a great leader. I’m hopeful and sure that he’s going to be fine. He’s a strong man and a strong person.

Trump’s comments came after Johnson was admitted to the intensive care unit at St Thomas’s Hospital and his condition took a turn for the worse yesterday.

There are around 331 million people living in America, of whom more than 32 million don’t believe in God according to research by the Pew Research Centre.

So already that’s approaching 1 in 10 people who probably aren’t praying for anything, let alone a foreign leader’s health.

And of those people who are religious, only half say they pray every day. A quarter say it’s something they’re not in the habit of doing at all.
Let’s not forget, also, that just because the US elected Trump, it doesn’t necessarily mean they like our floppy-haired leader.

When The Independent asked New Yorkers what they thought of Boris Johnson, they variously described him as “narcissistic” an “idiot” and a “clown”. So there’s that.

All things considered, then, ‘all Americans’ aren’t praying for Boris Johnson. Because numbers-wise that’s kind of impossible.

But it’s likely that many Americans are wishing the PM well and hope he recovers soon, even if they aren’t ‘praying’. After all, this pandemic is something we can all relate to, wherever we are.

Meanwhile, the Archbishop of Canterbury’s call yesterday to “people of faith” to pray for Johnson got a less than lukewarm response: 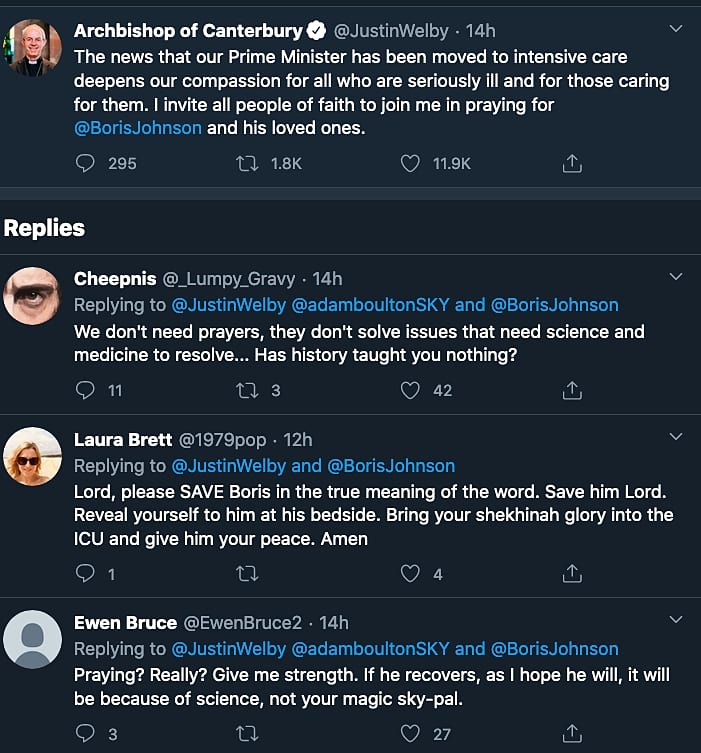 April 6, 2020
Atheist fails in bid to remove God from US oath of allegiance
Next Post