AN Italian theologian – Msgr Nicola Bux, inset below – is the latest to toss a chunk of baloney into the ongoing COVID-19/Christian woo discourse by coming down hard on priests who handle ‘Jesus’ with latex gloves.

One priest – a US chaplain Lt Col Alan Irizarry, who has been dispensing hosts while wearing gloves – was photographed by Winifred Brown and posted on the US Department of Defense website.

Bux said in a statement that:

The sacred ministers, especially priests, perhaps have no intention of profaning the Sacrament, but they do not know what it means to treat it worthily, that is in relation to the intrinsic value of the reality in question.

Eh? Something askew with the translation, methinks.

Bux went on to ask:

Who would bring a plate of soup to the table with latex gloves? It would create suspicion in the eaters. So why be surprised by the faithful who are outraged by such treatment of the Eucharist?

He added that ideas such as wearing gloves to distribute Holy Communion indicate:

A lack of human and Christian formation in this regard.

Bux argued that priests should simply follow the guidelines already in place in the General Instruction of the Roman Missal.

That text, as well as the rites of the traditional Latin Mass and the liturgies of the Eastern churches, aims:

To treat with devout dignity the sacred vessels containing the Eucharist, which also implies the hygienic purity of the hands; and this since ancient times.

After having consecrated the species, the priest keeps his thumbs and index fingers together, so as not to touch anything else until the Communion of the faithful is concluded.

He also mentioned that “incense, which has sanitising power,” is generously used by the Eastern churches.

This is also foreseen in the Roman and Ambrosian rites, but by some it is considered a sign of triumphalism.

Someone should point him to Science Daily which reported that the burning of incense:

Has been linked to the development of lung cancer, childhood leukemia and brain tumors. 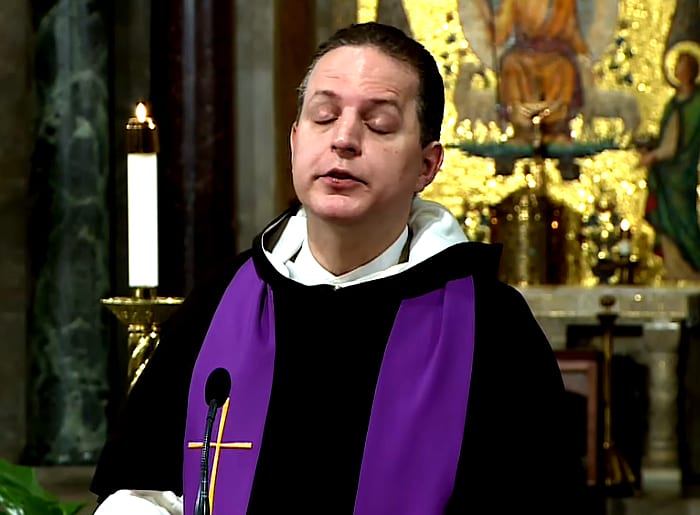 Enter Fr Thomas Petri, OP, above, another expert in superstitionism. The Vice President and academic dean at the grandiose Pontifical Faculty of the Immaculate Conception at the Dominican House of Studies in Washington, DC, dished this out on Twitter:

We don’t handle it with gloves and we certainly don’t put the Blessed Sacrament in a plastic baggie.

Petri’s Pontifical Faculty, through its Thomistic Institute, was also responsible for writing the guidelines on the phased restoration of public Masses, which were subsequently recommended by the United States Conference of Catholic Bishops.

Where on earth do they get these names? Ah, I have the answer here:  The Fantasy Name Generator offers Paragons of Dlakakhi, Order of the Three Divines, Gathering of Alosiphy, Congregation of Dreams, Followers of Arupruthy and a whole bunch more.

According to the Thomistic Institute, even receiving Holy Communion directly on the tongue, which some consider to be the most dangerous thing to do amid the COVID-19 pandemic, is possible:

It beggars belief that, in the middle of the 21st century, people can get mired down with arcane issues that have as much relevance to today’s world as alchemy.

May 29, 2020
Double blow for Catholic Church in Germany
Next Post