Until ALL Can Wed 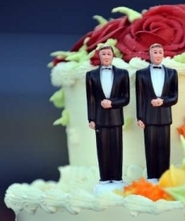 I fully and completely believe that God created us all equally in the divine image. In each of us is a reflection of our Creator. None are more capable of living into that reflection, none are less capable. That is exactly what I hear in the creation stories of Genesis when they tell us that humans were formed in God’s image and that God breathed life into humans. To be human is to be formed by God, in the image of God, and given life by the breath of God. All of us. No exceptions.

Today (May 10, 2011), the denomination to which I belong (PCUSA) has taken a very large step in recognizing the intrinsic value of all people. Technically, all we really did was pass an amendment to our constitution (The Book of Order), Amendment 10-A. What it actually does is give more governance of ordination standards to local governing bodies. That seems innocuous enough, doesn’t it? You would think so, but this has caused some disagreement and division in our denomination, and I understand that some churches have already voted to leave the denomination while still others are considering doing so. Why all the tension and division? It’s the pink elephant in the room.

While this change in constitution is about more than just the issue of homosexuality, the tension and division are because it opens the door to the ordination of gay folk. Oddly, it also opens it to the ordination to those having sex outside of marriage (as well as other things), but I’ve not heard many people raising a ruckus over that… it’s about “the gays.”

I hate to see the division in our denomination, but I am glad to see us taking so seriously the biblical reality that we are all created equally in God’s image. I do have to say though, while I am glad to see today come, I am dissatisfied with were we are. As an ordained minister in a denomination that will soon allow for the ordination of LGBTQ folk (even though we’ve actually been doing it forever), I cannot officiate the marriage of a same sex couple. The state will not allow or recognize it.

So, today I make a new commitment. I tried to be a voice in the struggle to change our Book of Order, that’s why today’s passage of Amendment 10-A pleases me. I happen to believe, however, that it is the Church’s duty to be advocates and partners with those who are not treated in a way which recognizes that they are created equally in God’s image. While we have made great strides today, I believe we have just begun, particularly as clergy. With that in mind, today I commit to sign no more marriage certificates until I can sign the marriage certificate of any two people who wish to commit their lives to each other before God regardless of their gender.

The wedding I participate in this Saturday will be my last to officiate. I fully recognize that it will be difficult and there will ultimate be those who, for varying reasons, will be disappointed in my decision, but I cannot sign another wedding certificate knowing that it represents a system that intentionally excludes people who I understand to be equally created in God’s image. To be clear, my commitment is to no longer officiate a wedding until I can officiate all weddings. I will still participate in weddings since I can do that for all people already.

I also issue this challenge to ALL clergy regardless of denomination: do the same. If you are not clergy, send this blog post to your minister.  If you don’t have a minister just send it to a minister, any minister. I’ve created a Facebook page where we can gather and publicly take a stand. It’s is also a place where those who don’t happen to be clergy can stand in support with us. Here’s the link to Until ALL Can Wed’s Facebook page. Please ‘like’ it in support and in taking a stand.

If we collectively stop signing wedding certificates, it would be a statement to states across the US. Imagine each County Clerk’s office flooded with people who can’t find a minister to wed them because the state won’t recognize the desires of same sex couples who simply desire to have the same rights as them. I think it would be powerful. So, I challenge my fellow clergy to take a stand with me and our LGBT brothers and sisters.

If you are willing to stand with us, please let me know in the comment section of this post and by joining the FB page. Thank you.

The IMDB "Goofs" page for the...
slacktivist
Related posts from The God Article with Mark Sandlin