King, Clowns and the Third Way 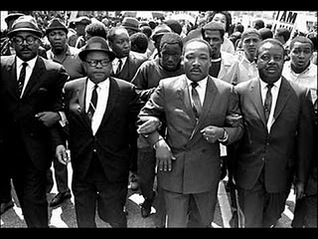 “The arc of the moral universe is long but it bends towards justice,” proclaimed the Rev. Dr. Martin Luther King, Jr.

It may bend towards justice, but it does not bend gently. It bends behind sweat of the brow, creativity of the mind, and love from the soul of those who believe that every living soul not only desires justice and equality, but has a right to it. You see, justice is not a passive pursuit. The moral arc will not bend without encouragement.

Dr. King was a living example of the kind of person who encourages the moral arc of history to bend toward justice. He is also an example of the only effective way to bend that arc: non-violently. We cannot hope to bring about justice by unjust means. Might, physical confrontation and other forms of domination will ultimately only result in nurturing an understanding that domination is an ineffective way to resolve issues of justice – and domination is the exact opposite of justice. As King says, “Hate begets hate; violence begets violence; toughness begets a greater toughness. We must meet the forces of hate with the power of love.”

King was a Christian minister and I see his bias toward the least of these, the bullied and the marginalized; his preoccupation with justice; and his insistence on non-violent ways to bringing about justice as results of his attempt to live out a life guided by the teachings of Jesus. For certain, that is not the only impetus for doing the hard work of bending the moral arc of the universe, but I believe it is the only sincere way to be a follower of the teachings of Jesus.

Author and theologian Walter Wink also understood this moral imperative for those of us struggling to devoutly follow the teachings of Jesus. He helped us to see that not only is the idea of violence being redemptive a myth (violence, as Dr. King pointed out, begets violence), but there is a better way. He called it “Jesus’ Third Way,” which is also the name of a small publication he wrote in the 1980s to show Christians a way to non-violently resistance apartheid. In it Wink points out:

This begs the question though, “what does this look like in every day life? How do those of us who are not Kings or Winks or even members of Occupy Wall Street begin the work of bending the arc of the universe toward justice while honoring this call to non-violence?”

To answer, I’d like to share with you a story. It’s a true story of the Coup Clutz Clowns. It happened in Knoxville, TN. The video is narrated by the author of the story, White Flour, singer/songwriter and peace activist David LaMotte.

That is non-violent resistance. Was it inspired by the teaching of Jesus? I have no idea – and it really doesn’t matter. What matters is how they resisted hate and domination. They did not respond in kind with hate and domination aimed at the “other side.” The unusual and pointed white hoods which hid the identities of the KKK members or even the people themselves who were only willing to show their racism while hiding behind those masks might have been an easy target, but they didn’t respond in a way which would belittle the other person. They took aim at the silly idea that one race is more important than another and let their sharp wits fly in a barrage of puns and general silliness (along with bursting bags of flour and arrows of daises).

So let us march on, bending the arc of the universe toward justice. It will take the sweat of our brow, the creativity of our minds and the love of our souls if we hope to sort out a non-violent way forward, but we must never lose sight of the reality that non-violence is the only way forward. And may our friends, the Coup Clutz Clowns, remind us that sometimes the hard work of bending the arc of the universe towards justice can be made all the more pleasant (and effective) with a little humor.