The Anti-LGBT Stance of The Salvation Army: Internal Documentation 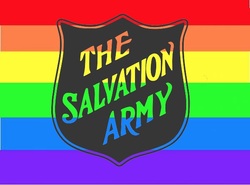 Salvation Army kettles and the ringing bells that dot storefronts every Christmas have become something of cultural icons. When my kids were younger, one of the true joys of Christmas was each of us grabbing a handful of coins as we headed into the grocery store and joyfully stuffing it all into the kettle as we exchanged our “Merry Christmases” with the kettle workers.

We don’t do that any more.

As my family and I learned more and more about the church’s stance on homosexuality, we decided to share our money in other places. It was a difficult decision. We know how much good the Salvation Army does in our own town. Even our little church receives references from the local Salvation Army for people who need aid as we partner with them to help those who are struggling.

When I tell people about our decision I’m always surprised by how many people weren’t aware of their stance and by those who want to deny it or point to the fact that the Salvation Army doesn’t discriminate when giving out help.

I’m not actually trying to convince anyone to stop giving. That’s just a personal choice I made. I am, however, hoping that if enough people are made aware of the internal goings on of the Salvation Army we might put enough pressure on them to create a positive change.

The following is a testimony I received from an officer in good standing with the Salvation Army. I think you’ll find it to be heartfelt and the voice of someone who wants a healing change rather than to be destructive. In it you’ll find internal information from the Salvation Army as well as a photo of the email. Some of the information has already been released to the public but the last piece is something that was news to me.

I was going through a normal day at the office of the Salvation Army. Our food pantry was open and we were assisting people left and right, trying to help them out of the quagmire of poverty. It was never an easy day. Much of my “job” requires me to go through communications from our divisional headquarters and fill out reports. I put “job” in quotation marks because as an officer in the Salvation Army, I am not an employee. I am a minister of the Gospel, who receives an allowance from the Salvation Army for his services, including a parsonage.

You know it’s going to be a very unusual day when you receive an email from the territorial commander. He is my superior, similar to a cardinal in the Roman Catholic Church. The communiques from him were only necessary when something important was being disseminated. Apparently, the Salvation Army in America was getting wise to the fact that change was on the way as to LGBT rights. The Army knew that the country was changing slowly to a more equal society, accepting all people for who they are and not for the relationships they were in.

Most people realize that the Salvation Army is a religious organization, dedicated to helping those in need. From small day things such as food pantries to disasters on a global scale, we are there at the forefront, meeting needs in Christ’s name without discrimination.

What so many people don’t realize is that we are also a religious denomination. If you were to categorize us, we would fall in the Holiness Movement. Denominations such as the Methodist Church, the Wesleyan Church, and the Church of the Nazarene are closely related to us doctrinally. The founders of the Salvation Army, William and Catherine Booth, came out of the Methodist Church in Great Britain. We were one of the first denominations to wholly endorse the ordination of women. At a time when it was a novelty, some of our best officers (clergy) were women. We were at the forefront of equality then.

What about now? As I sat at my desk, reading the email from my territorial commander, I shuddered inwardly. I knew that the Army was preparing to make a stand against marriage equality. The first step was in this email.

The winds of change were blowing. The Supreme Court of the United States was hearing arguments for and against the Defense of Marriage Act (DOMA) and Proposition 8 in California. Before the verdict was rendered, all officers received an email, marked PRIVATE. I read the email and knew exactly where the Salvation Army was heading: to confrontation.

I grew up in a conservative Salvation Army household. I remember when we made the switch to vote Republican. President Jimmy Carter, who was a born-again Christian, stated that he would support the pro-choice movement and do nothing to overthrow Roe v. Wade. My parents called us in and told my siblings and me that they were going to vote for Ronald Reagan. Afterwards, we were staunch conservative supporters.

My litmus test for voting: Did the candidate support abortion? If he/she did, I would vote against him/her. It didn’t matter what type of candidate he/she was. The candidates could be the worse off with finances, but as long as they were against abortion, I was OK with that. Then I went through some serious changes. These changes told me that everything I believed was wrong. I had read online in Facebook, “If Jesus were alive today, he would be eating with drag queens and employees of Planned Parenthood.”

I was shocked at that revelation. Gluttony is a sin, but we have no problem ordaining overweight pastors and saying that they are Christian. We don’t ask them to go on a diet. Divorce was condemned by Jesus as being a type of adultery. I knew many Salvation Army officers who had been married twice (even 3 times!). This type of grace should also apply to the LGBT Community, too!

This is what I read:

“Sexual attraction to the same sex is a matter of profound complexity. Whether this is the result of genetics, environment, or some combination of both, attempts to deny its reality or to marginalize those of a same-sex orientation have not been helpful. The Salvation Army does not consider same-sex orientation blameworthy in itself or simply a matter of the will. While some Christian believers witness to a reorientation to heterosexuality, this has not been the experience of all.

“Scripture forbids sexual intimacy between members of the same sex. The Salvation Army believes, therefore, that Christians whose sexual orientation is primarily or exclusively same-sex are called upon to embrace celibacy as a way of life. There is no scriptural support for same-sex unions as equal to, or as an alternative to, heterosexual marriage.

“Likewise, there is no scriptural support for demeaning or mistreating anyone for reason of his or her sexual orientation. The Salvation Army opposes any such abuse.

The statement was not new to me. Even as I disagreed with it, I was glad that the Army recognizes that sexual orientation in and of itself is not a sin. However, I totally disagreed with the statement that all LGBT people need to be celibate. Celibacy is a high and holy calling, which not many people are called to do. It is to dedicate one’s life to God. It is not something that is forced on someone because of his/her orientation.

Finally, the last statement shocked me. If I were to participate in any way in a same-sex union/marriage, I would be disciplined. I was dumbfounded. There was and is no room for negotiation here. If my child were gay, I could not go to his wedding. If a friend of mine who is lesbian, asked me to say a prayer at her union, I could not. If I were to officiate at a wedding, I would be disciplined.

I cannot accept this situation any longer. The Salvation Army, for as much good as it does, is heading into the realms of intolerance and discrimination. The Salvation Army does not allow any practicing person of the LGBT community to be a member (as a soldier or adherent) or to be ordained (as an officer). The Salvation Army terminates the membership of those soldiers or officers found in such a relationship. The Salvation Army has ruined many lives already through the loveless act of excommunication. We don’t call it that. We use the euphemism of “striking them from the roles.”

I do not have the courage to publicly sign this article. It would ruin my career as an officer. I am begging you, the reader, to write the Salvation Army and ask them to reverse this policy and endorse their Mission Statement: to preach the Gospel Jesus Christ and to meet human needs in his name without discrimination.

Please join us in encouraging The Salvation Army to reverse its stance of preventing people in the LGBT community from being members of the church as well as their heavy handed approach to disciplining officers who officiate in same-sex marriages. We’ve set up a petition that we’d like to present to them. Please, sign it and share this with your friends and encourage them to do the same.

We must stand against intolerance and discrimination every chance we get.