“SELMA”: Inspiring and, Thankfully, Not Iconic 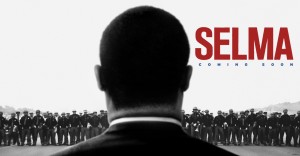 In his acceptance speech, of which we do not get to hear the actual text, since Stephen Spielberg and DreamWorks own the rights to all of his speeches, Dr. King accepts the award on behalf of all of those who made the Civil Rights movement possible. (It should be noted that director Ava DuVernay, in a stunning rewrite of Paul Webb’s original screenplay, time and time again manages to deftly approximate the style of Dr. King’s speech writing – so much so that I, an avid reader of King’s work, was frequently unsure throughout the movie whether the speeches weren’t actually King’s words).

At this point I should note, there will be light spoilers in the remainder of this review.

After crediting the Civil Rights movement and those who gave their lives for it, two key scenes follow quickly on heels of his acceptance of the Nobel Peace Prize.

The first is of the bombing of the 16th Street Baptist Church in Birmingham, Alabama. If you know anything of the history of the Civil Rights movement, your stomach is tied in knots long before the bomb goes off. As you watch those four young girls walking down the stairs, you know they will not make it to the bottom.

I couldn’t help but hear the words DuVerney put into King’s mouth at the beginning of the film as he practices his Nobel acceptance speech: “I accept this honor for our lost ones whose deaths pave our path, and for the twenty million Negro men and women motivated by dignity and a disdain for hopelessness.”

Scene two brings the always welcome return of Oprah Winfrey to the screen. Winfrey, as nurse Annie Lee Cooper, attempts to register to vote. We get far too little of Winfrey in the movie, but this scene is certainly a gem. In it she navigates both a fierce determination and a bit of resigned sadness as she recognizes that, once again, she will be “DENIED” based on restrictive and arbitrary registration practices that were used throughout the south specifically to disenfranchise potential black voters.

“I accept this honor for our lost ones whose deaths pave our path, and for the twenty million Negro men and women motivated by dignity and a disdain for hopelessness.”

The first nine minutes of the movie perfectly set the tone for what not only needed to happen in the movie but, in fact, did happen.

Specifically, SELMA does not turn King into an icon.

It may actually be that the inability to use King’s speeches played deftly into DuVerney’s hands.

In a speech given to the House of Representatives on January 20, 2004 in memory of Dr. King, Dr. Valery Smith, the Woodrow Wilson Professor of Literature and the Director of African American Studies at Princeton University, made what I have found to be a profound and insightful observation:

“ …by focusing on the same moments in Dr. King’s life, and on a few words from one speech in particular, we, paradoxically, reduce him to the status of an icon. We do a disservice to his memory, to the movement to which he gave so much and in the service of which he died, and to the legacy we seek to honor. For the struggle for freedom and equality preceded and extends beyond what we commonly call the Civil Rights Movement. As he suggests so eloquently in his Nobel acceptance speech, The Movement was and is larger than his leadership. And of course, Dr. King was much, much more than these phrases and these moments.”

In his portrayal of Dr. King, David Oyelowo (Interstellar, The Butler) walks right to the edge of being iconic, but blends in enough frustration, doubt and trepidation to allow King’s vulnerable humanity to show through. Coupled with DuVerney’s telling of King’s sometimes stressed home life, he quickly becomes someone with whom we can identify rather than an icon from a time long past.

Just as Dr. King said in his final sermon entitled “The Drum Major Instinct” that he did not want to be remembered for his achievements and awards but rather for serving others, SELMA is a not film about a historical achievement but, rather, it is about a community coming together and serving a greater good.

It is a film that invites us to re-remember the power of non-violent protest, the peaceful victory that can be achieved through well-organized majorities and the relative weakness of the powerful when faced with the quiet strength of real community.

You see, there’s a reason the film is named SELMA and not MLK.

There’s much talk about Oscar nominations in almost all categories for this film. I find myself in disagreement with many of them. While it is a fantastic movie and I highly recommend that everyone see it, I find that well made films about difficult historical moments, featuring convincing lead actors frequently are given extra consideration simply for being that kind of film.

I hope you watch SELMA and I hope you do not enjoy it.

I hope it disturbs you to your core.

I hope you are reminded of the terrible injustices that have always existed in this world.

In the end, I hope you find it to be a film about why you are going to join the movement.

January 9, 2015
How the “I'm Special” Confirmation Bias Ruins the Bible
Next Post

January 15, 2015 The Irrationality of Fundamentalism in Progressive Thought
Recent Comments
0 | Leave a Comment
Browse Our Archives
Follow Us!