A Case for Escape

This week Secular Avenue announced its 501c3 status as a registered non-profit. We are ready to help people from all walks of life find their way to a SAFE autonomous path to independence. It’s under the directorship of my friend and fellow board member, Noelle George, who many of you may know from her work with the Foundation Beyond Belief. I didn’t think twice about saying yes when she asked me to join, because I too know what it’s like to be stuck. This week I’m going to tag myself a little and get personal in doing so.

This month my son celebrated his twentieth birthday. I’ve been a dad for a little over twenty years now. He and his sister were from my life and marriage as a Christian. I married my high school darling way too young, and had my son equally, way too early. I wanted to live the life that my grandmother told me to. Walk with God, hand in hand with the one you love. Divorce just meant you didn’t try hard enough.  More importantly the Catholic Church didn’t recognize it. Although I personally agree that sometimes we hit the escape key on relationships too soon, sometimes – we don’t leave early enough. So to my story…

My exwife and I were hardcore New Yorkers. Our families, for the most part, were (and still are) NYC fixtures. The New York City lifestyle was all we knew. Her family was her backbone and it was always just one metro swipe away. I thought twice about accepting a job that required us to relocate anywhere out of state, so when the opportunity arose I took one big pause before I put it on the table. Little more complicated than deciding “Ray’s” or “Not Ray’s” pizza for dinner.

We always wanted something better for our son, especially with our backgrounds. Our Brooklyn in the eighties and nineties was a far cry from the upscale aspiring hipster destination spot it has become today. I, bright eyed and bushy tailed, was optimistically and enthusiastically ready to rush in. This was going to change our lives. Prior to then, we barely made ends meet. The cost of living in NY can get expensive as hell and the Texas tech economy was booming. There was gold – err, silicone in them there hills. I was ready to head west (well, south west). Applied Materials was just breaking ground on their big Fab wafer manufacturing facility in Austin. Motorola and Samsung were making unprecedented moves, IBM was moving several hundred developers from Boca – and consolidating their services division into what is now Global Services. So she said yes (again) and we were there. That was the start of our adventure. Onward.

It would take several years of seeing my wife slowly recede from our world for me to begin to ask the question “what’s really going on?” …  Someone else emerged in her place; someone much darker.  Without her family and established relationships, she lost much of the luster in her smile. I had a burgeoning career and a wonderfully entertaining toddling boy. I thought we were doing well enough. We did the family picnics at work and even did the church networking thing (I went through the motions anyway).  Some of my religious coworkers even helped me chart my way into my employer’s “Fellows” program, a promise for employment permanency. I travelled what seemed like everywhere and experienced the “new” daily. I nibbled on the crumbs of America’s blessed apple pie and I liked it.

I had everything going for me. I was the youngest, the brightest, and the darkest (hey it happens) in my division. I wasn’t looking back. But we still couldn’t smile together.  Much of her affection was replaced with visible resentment. The idea of school and work – became even less appealing to her. The walls she put up, I could do only so much to penetrate before she returned my concern with debasement.  It didn’t take long before signs of withdrawal went noticed by friends. It was kind of hard arriving at celebrations and family functions, without  “the family”. I eventually stopped attending. My marriage was on the rocks and no amount of prayer or counseling helped. When the arguments ensued, when the stuff literally started flying – I just wanted to disappear.  I wanted to leave. But men don’t run and real men stick around to be fathers to their children. There were enough contributing statistics of black single parent families and their results.  According to the 2010 census data:

“55% of black children were more likely to live with one parent than non-Hispanic White children (21 percent) or Asian children (13 percent)”.

Not my kids. It was culturally engrained in me to stick around. My mom did it when my dad walked out, so I was going nowhere. Though I think she did a pretty damn good job raising me with what she had, not having “him” around played a number on me. The rejection you feel believing that you’re not worth it, being unwanted – can mold your foundation. It has an impact on your self-worth and how you cohere your reality. It touched what I would have called then “my soul”. Maybe that’s why I devoted so much of my youth to “god the father”.

He was always there. Well, so I thought.

In for a penny, in for a pound, since having one child made it hard to leave – two would make it EVEN EASIER. My wonderful (now eldest) daughter was born. We had a brief reprieve and for a few months, things were good. I even got a promotion at work.  Then came September 11th, 2001. Our lives changed again.

Much of the booming tech sector saw jobs eviscerated.  My division was eliminated. A lot of good people struggled and were out of work for a while. Add that to the mix of constant stressors of daily life laced with the insidiousness of untreated depression and you find that your home becomes a dry Texas tinderbox and every word a match.  The verbal assaults and psychological warfare escalated. Unemployed –  where was I going to go? My faith was gone. I had no god. I had already lost my religion. I couldn’t leave my two children with her. I was afraid for them, but the chances of me being awarded my kids as a man in Texas in a contested divorce was slim. Approximately 85% of single parent households are headed by custodial single moms in the US, while 15% are headed by custodial single dads, and even less if you’re black. Conservative judges don’t like taking babies away from their mothers. Besides, who was going to believe my story? How many times had I heard the phrase:  “You going to call the cops? Who do you think they’re going to believe?” – That stopped me from calling so many times. Having worked with other survivors, I’ve learned that its a shared sentiment regardless of sex or gender identification. The few times I shared what was going on with my most select male friends I got their predictable misogynistic response, “Man Up”. Not many other terms infuriate me so.

It all culminated in one event. Two kids in the house confused and crying, her trying to bust through the other side of the door that separated me from her and the large Phillips head screwdriver she had with the intent on burying into me. I had enough time to explain to the 911 operator my location and situation. Cell phones back then, weren’t great at triangulation and their reception was even sketchier then, as mine went dead not long after placing call. That could explain why the entirety of the Williamson County Sherriff’s department was there within minutes.

Everyone walked away safe. Scarred – Scared? Yes. I was looking at single parenthood, unemployment, no religious support network, and everything else on my plate. Distanced from my family, who had turned much of their backs on me when I started using the word Atheist, I didn’t know what to do. Outside of thanking the State for a recurring protective order then screaming at the DA for reducing an obvious felony charge to a class C misdemeanor, I was legally in the wilderness. The lawyer that I exhausted the rest of my savings on explained to me the complexity of getting such a conviction in a conservatively male dominated district that was steeped in “traditional values”. Sigh… #Nohashtagsbackthen

Today I’d argue Intimate Partner Violence, Sexual Violence and stalking impacts the lives of millions of Americans. According to the CDC:

Those are the facts, don’t tell me to man up. And within the LGBT community the Antiviolence Project suggests:

The link to the survey is below including additional LGBT stats, but there is an interesting ethnic divide that bears further exploration at a later date. This problem is real and almost across the board.

Back to my story. We got better and we survived and it took time. Those were some really dark times for us, filled with a lot of uncertainty. Single dad of 2? If ever I wanted there to be a god, it was then. I hit the bottom, scraped the barrel, grabbed a shovel, started digging, and then finally reached for a ladder.   I used my hands to hold my children and not clasp them in prayer because I had fallen so far away. But for those that are not, I can understand the lure and safety that a church could provide.

Since I had no Bible, I had this one quote I remember from Khalil Gibran that helped me:

“Out of suffering have emerged the strongest souls; the most massive characters are seared with scars.”

That kept me going. That’s why I know very personally, we need more rungs.  You don’t always need a happily ever after, sometimes you just need to be SAFE.

So yes I am putting this out there and yes, disclaimer I am a proud volunteer unpaid member of the board to Secular Avenue and I believe in it. My story is not unique. I may not need your financial help, but someone else (godless or not) is out there living in fear and can’t leave home for their own reasons. Hell they may even look like me. Hang up the biases and preconceived notions you have on what predators and offenders may look like and peek at the faces of survivors you can help instead.

Look for Noelle’s talk with our Friendly Atheist in the coming weeks. Here’s a link to the press release.

Here are links to sources on IPV, Domestic Violence, and the stats I cited: 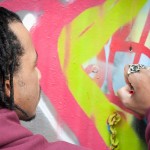 February 3, 2015 Beyond Privilege
Recent Comments
0 | Leave a Comment
Browse Our Archives
get the latest from
Nonreligious
Sign up for our newsletter
POPULAR AT PATHEOS Nonreligious
1