When Silence’s Kiss is louder than God’s Love

You told me He loved me, but when I called His name, he wasn’t there.

I still wilt a little remembering the first time my father touched me that way. He called me his Daisy. No man would touch me like that again until I was married. His caress was uncomfortable, but familiar to me, yet his words, which soothed the widow and moved the congregation, used to put me at ease just before he would place his hand over my mouth. He was a tall man, lumbered over most at over six feet. His clean shaven face was spotted with freckles and a peppered beard.  I could smell the abundance of communion wine soaking through his pores and filling his breath when he was that close to me. He was kind to others and courteous to most, often only lashing out at the occasional nonbelievers. He could charm the skirts off any woman in the congregation and they’d probably keep quiet, but they weren’t good enough.

I must’ve been special.

As I lay there praying for death, or humming, I could close my eyes and pretend that I wasn’t there, imagining my place in the front row on Sunday morning. The choir director always smile at me. Sundays brought me colors. Colors of flowers I could not pronounce, and in all likelihood, couldn’t be pronounced by the beautiful women and brown faces they adorned. I could pretend to be one of them, and convince myself that he was my husband. I mean, I was his flower, his little girl. And daddy’s don’t do “this” to their little girls.

I’d dream of  flowers, like the ones he used to bring to my mother when she was young and pretty.

She knew.
She told me I should accept that a man of his caliber was interested in me, after all, he was a man of God.

And I was his little girl, until I was his mistress.

I believed in him, just as I believed that my God saw purpose in this. There had to be.
His love was imbued in the Word, so it followed that his touch must’ve been too. I was young.

This was no ordinary initiation into the grand rite of sisterhood. This ritualistic dance that I would spend my adulthood trying to forget or find meaning in, had a rhythm that was foreign to any of my friends.

My nineteenth birthday came before I left home. Haunted by his memories, I still occasionally find the relief in a dismantled pencil sharpener, scissors I’d sharpen, or a broken disposable razor. The fascination with the taste of my own blood, began the first time he struck me because I dared push him off and say “no”. The sanguine saltiness was just enough to distract me, though I’d wake with a sore inner lip or cheek from purposeful biting. Other girls would probably find some sense of relief or security in a shower, but I couldn’t escape.

His glare followed me.

He’d often find cause to meet me there and stare. Seven years lost.

I spent seven years screaming for God’s help, and when He was silent, I found comfort in the silver bare metal that ran across my thighs and onto my arms. When I’d occasionally overdo it, there would be just enough blood staining my sheets to convince him of an early menses. He couldn’t be with me then, I was unclean and he was godly. Regardless of the shame of Eve’s sin, I learned to embrace the cramping and discomfort for 3 whole days. Truth be told, I looked forward to it.

On my seventeenth birthday I sat in the tub uttering what I thought was my final prayer.

If I make it to see you, the only question I ask is “why”.

That was it. Nothing special. I didn’t have my father’s gift for words.  I was not quite dead, but dying inside.
I woke up with twelve stitches on each wrists, climbing vertically up my now tatted arms draped in red and blue butterflies.

I remember fading in and out during the whole time. No out-of-body experience for me, not even a glimmer of light. Where was this tunnel, the sirens, the angelic accompaniment that I’d expect from that God who was silent for so many years. Would He not send one of His angels to shepherd back one of His most faithful? I never once cursed His name. But I was a sinner and I was taking away His greatest gift. Life.  You can’t take what God gave you and throw it away, except when God gave you a life that wasn’t worth shit, where was the loss?

He didn’t stop and my God rejected my advances to enter His kingdom early. That meant I’d have to endure almost two more years of this.  My parents said I was to be punished, but what more could they do?

I lied to my therapists, I couldn’t tell them the truth. My father was respected in the community and he had dominion over me, my family, and my parish. Were they really going to believe me anyway? A troubled daughter of God’s messenger?

There was a beautiful dark skinned nurse named Helen there, who urged me to put down my bible and stand for myself. Do what God could not, and find my own freedom. I wished I had done it then, but some things are easier spoken.

I “accidentally” overdosed a few days after my eighteenth birthday, a year after my first attempt, hoping that this time – death was closer. The nurse was still there, at this point begging me to find a way out. I never told her, but I knew that she knew.
After a few months in therapy, I’d only gotten worse.

On my last trip to the ER, Helen surprised me with a one-way ticket out of town and a few dollars she could spare.
She gave me names of her friends who would be there waiting, she had one stipulation – leave my dad’s bible behind. Turns out I had thrown myself into scripture looking for the strength to endure, but it wasn’t until I put it down, that I’d find the strength to leave.

I ran into Helen again a few years later at a local gathering, when I went back for my mother’s funeral. I thanked her profusely for saving my life, but I could tell my adulation brought embarrassment. She pointed to the small red “A” (atheist) pin I had on my shirt. I couldn’t tell if she was, after all that time, NOW judging me, because of my disbelief. Her peculiar grin turned into a small smile, then she pulled out her bigger “A” pendant. She took it off – and handed it to me and said it was a fair trade for my father’s bible, which by the way, she kept. I’m glad she didn’t offer to return it, because that would’ve made for a very awkward no.

I can’t save the world and I still fight my urge to cut when things get bad. I honestly still do. But I’ve stopped looking up, I’ve stopped listening for things that aren’t there, and I’ve learned to enjoy the smell of the flowers in my new earthly garden.

Its hard living with the “what ifs”. If only I had questioned it all before, perhaps it might have been different. But if I get stuck thinking about that now, I might lose myself in crimson pools – and I don’t want that sleep anymore.

One life to live. Thank goodness, because if I’d have to see him in heaven for an eternity – how is that anything other than my hell. 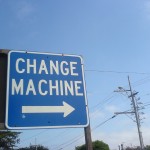 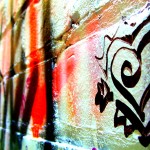 April 13, 2015 Atheism is freedom to Love, Change, Hate, and be More
Recent Comments
0 | Leave a Comment
Browse Our Archives
get the latest from
Nonreligious
Sign up for our newsletter
POPULAR AT PATHEOS Nonreligious
1