What it’s like being a Black Atheist at a Trump Rally February 28, 2016 Alix Jules

Terrifying, but for all the wrong reasons.

I got the announcement for the event just a few days prior, “Make ‘Merica Great Again” was coming to Ft.Worth. Why not?

The apprehension was stifling, I’d be lying if I said it wasn’t.  Just a few days ago, former Grand Dragon of the Ku Klux Klan, David Duke, endorsed the Republican frontrunner, and a few days prior, men with pointed white hoods showed up in Nevada to reclaim their piece of Trump flavored apple pie. Yes, I was scared, but I had my camera. Worst case scenario, I would film my demise as a cautionary tale for other bloggers.

First things first, why I did it.

Unfortunately, just a few weeks ago, I flippantly suggested that the Republican Party harbored safe spaces for racists and white supremacists to which I was rightfully challenged. Condemnation came in waves, so I thought what better way to test my hypothesis than by attending a rally for the presumptive Republican Presidential nominee, who holds the overwhelming lead nationally? This was the essence of the current Republican Party, so I had to go.

I expected to see a circus of rural White America choking itself on home grown, Reagan-tinted, ideological White Supremacy, with that casual side of southern fried racism. However, what I got instead was a typical cross-section of smiling White America, chanting “Trump!”

These were not the overtly-racist, back wooded, unintelligent masses that a more liberal America believes are his supporters. No, these were regular everyday people, doctors, lawyers, farmers, businessmen (big and small), entrepreneurs, and even immigrants who undyingly believed in the American dream. 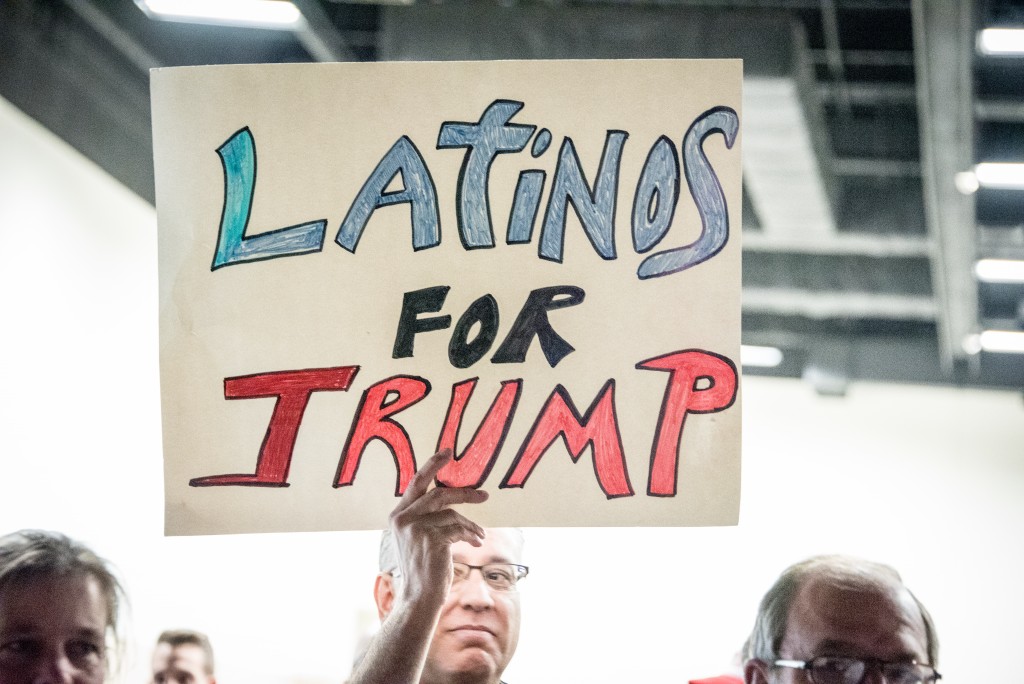 In retrospect, that was the most terrifying aspect of the rally.

As an outside casual observer, there was definitely spectacle to it.

There was this guy: 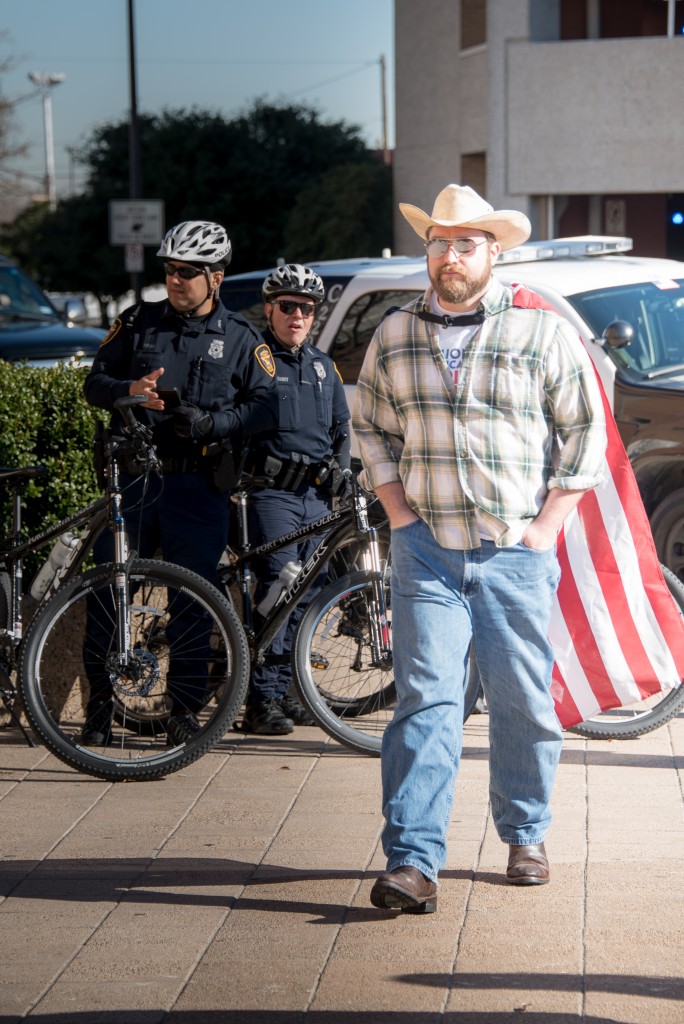 He was awesome.
He successfully trolled a documentary being filmed by a Japanese film crew highlighting America’s “unorthodox” political discourse. When asked why he supported Trump, his simple response highlighted one of the weirdest portions of this presidential cycle:

“I really want to have sex with his daughter. Have you heard how he talks about his daughter?”

I’ve got another clip below where he eerily projects the future of American politics. By the way, that’s my friend Dr. Zach Moore, who volunteered to be my chaperone in case the Aryan Brotherhood decided to take up Mr. Trump’s offer of paying legal fees for supporters that felt the need to ruff my kind up. As Zach continued the charade, a few guys behind me in line, unaware of the troll, sneered, snickered, and added:

Ok, that bit I expected, but you can find that almost anywhere. It’s not unique.
There were outside protesters, but not in the amount that I expected. A few of the local Hispanic and Latino community carried “Dump Trump” signs and got into a few verbal matches with supporters who were all too eager to show their bigotry. One guy dressed in a flashy suit and Rolex murmured to a woman I presume to be his wife:

“I’m surprised they even speak English.”

There was the other guy who made it a point to shout down a sixteen year old girl who used Mr. Trump’s quotes in defense of her protest. He simply responded with:

“You’re obviously too emotional and too young to understand the issue.”

OK, I expected that too, but also not unique to the Trump Party.
One of my favorite protest, however, was outside when drivers blaring Tejano, Mexican, and other Latino music, circled the convention center. The flags were prominent and the music was loud and delightful. 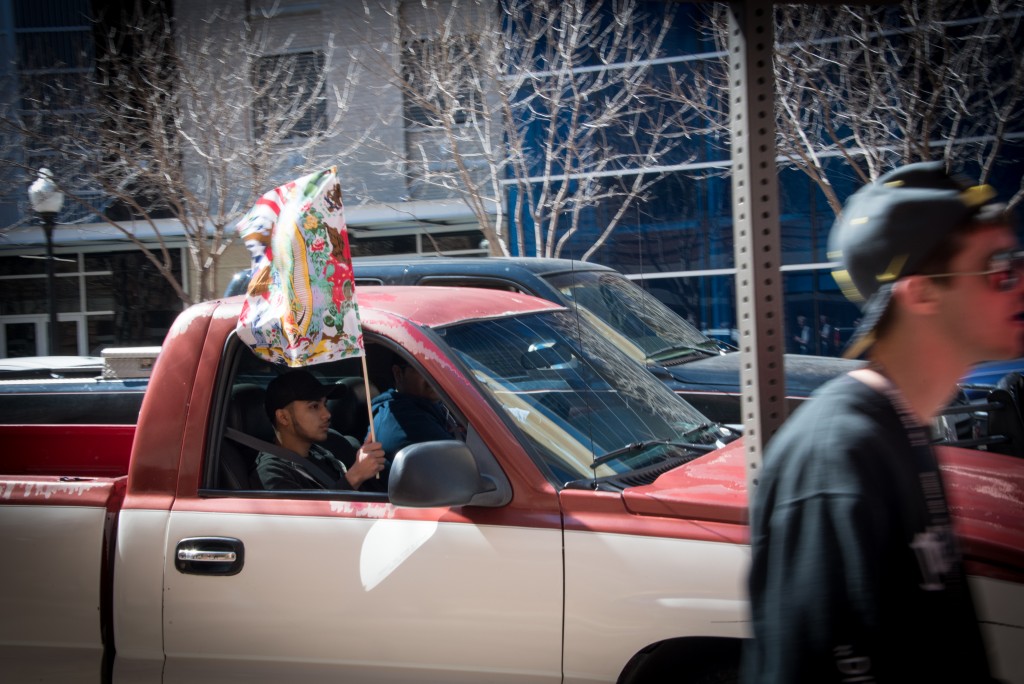 That was in stark contrast of these folks I spoke to, who were all in for a Trump presidency, citing their success as the roadmap for anyone else.

“Its the American Dream, where else can you be this successful. Where else are you going to go? This is the land opportunity.” 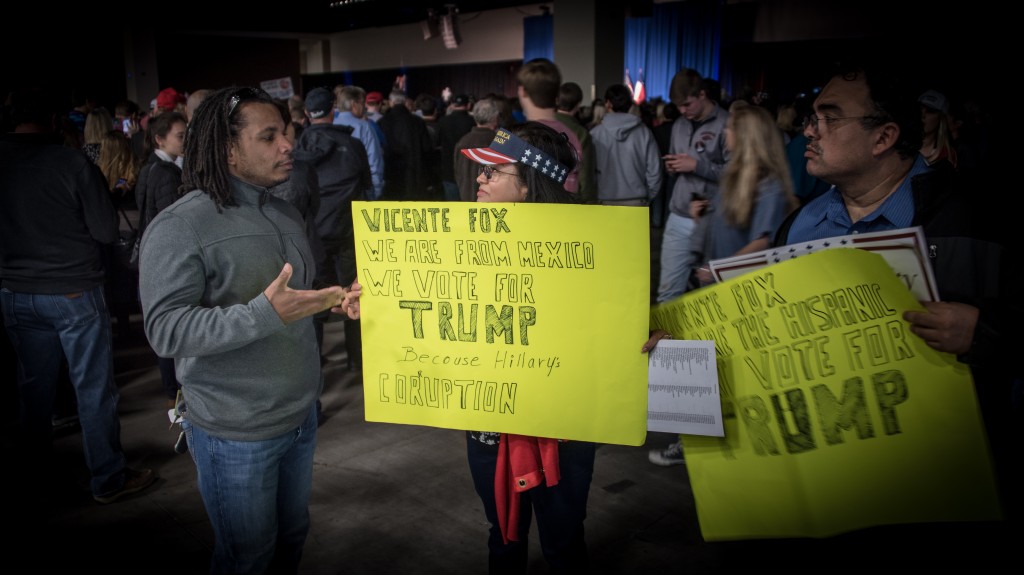 There were a few African Americans selling their wares there too. When I inquired, not one of them was a supporter. In fact, most of the merchants I spoke to found the Trump movement pretty “noxious.” 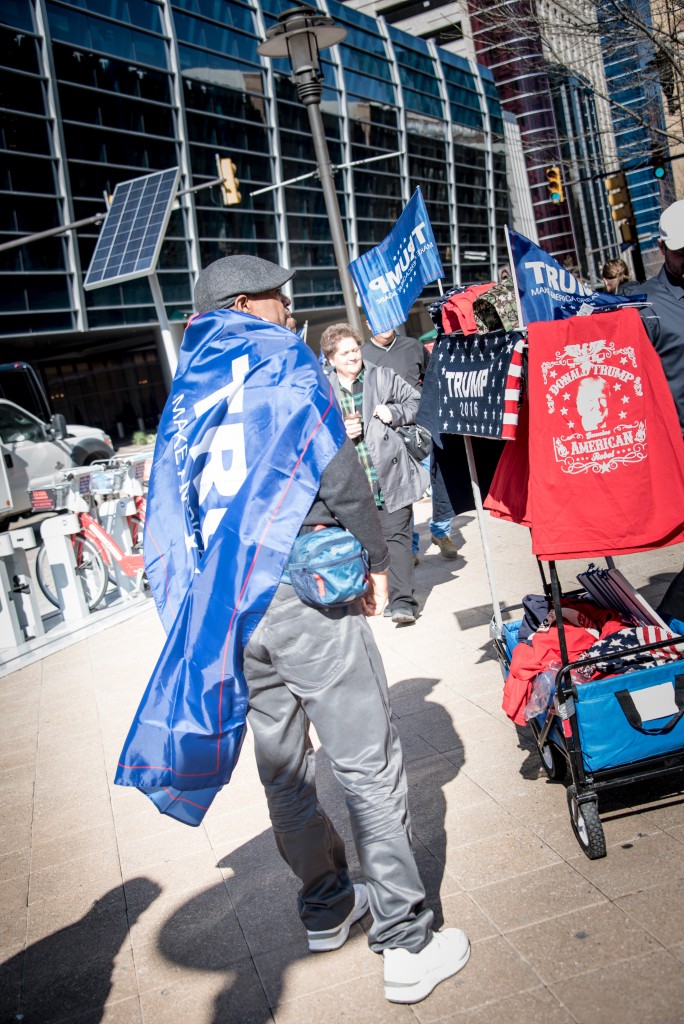 “I have no issues separating these racists from their money,” said another merchant on the requirement of anonymity. It was a display of capitalism without a conscience, which was fitting for such an event. And before you infer too much about my personal political stance as a writer, although I have my favorites, I’m too disillusioned in our system to believe it represents or cares much about its minorities, regardless of their particulars. I’m an observer of incremental political change.

So I also got to see this guy, which was a surprise. 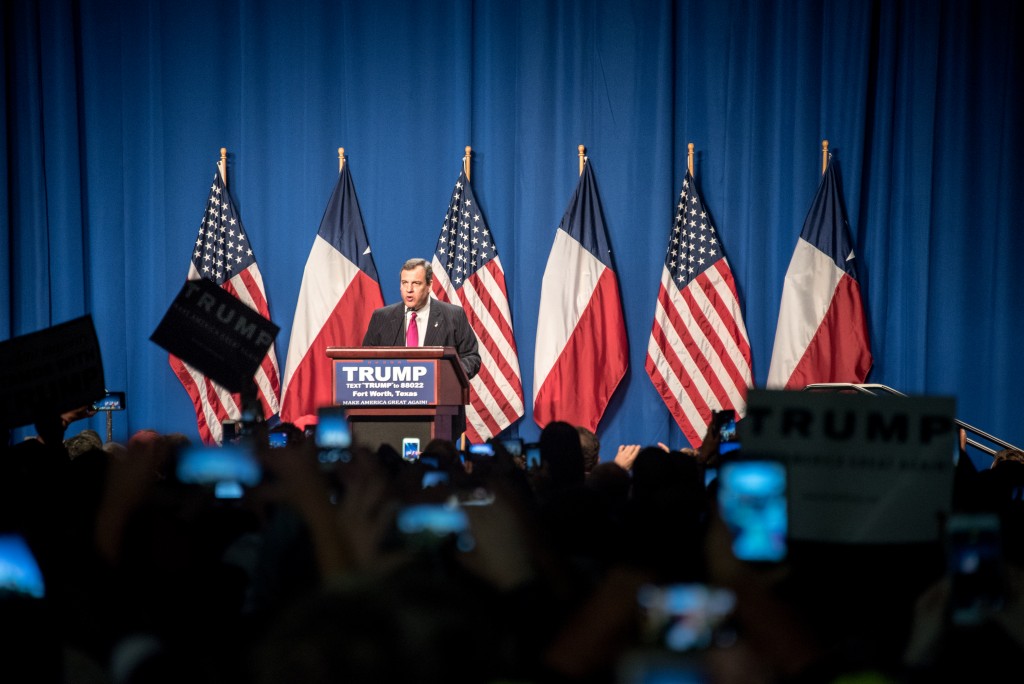 The big news of the event, “Chris Christie endorses Donald Trump”.  True to form, the New Jersey Governor took as many shots at Cruz/Rubio as Trump did the night prior at the CNN Republican debate. It was a weird passively vitriolic atmosphere.

In a state that prides itself on conservative values and loyalty, they turned in a hot second on its own conservative Senator. A Texas crowd of nearly 10,000 booed Senator Ted Cruz. It wasn’t a feigned murmur either.

“He’s not a real conservative!” blared from the crowd.

Then it was time for his entry. 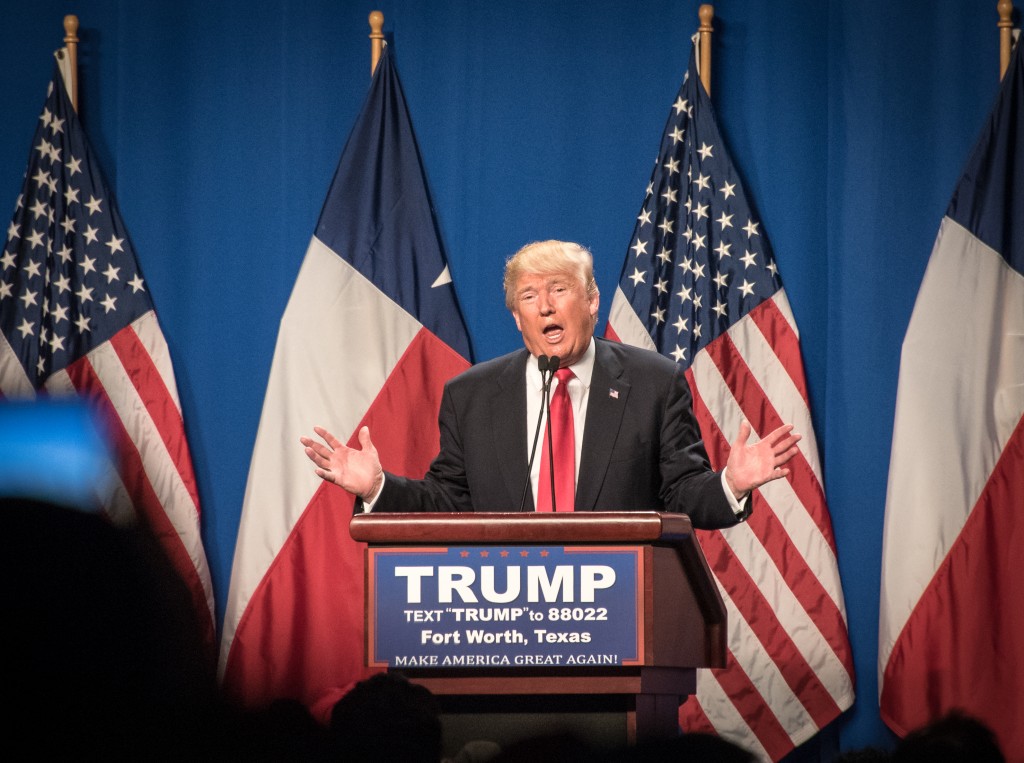 Seriously, I felt that he could’ve talked about himself for another hour without breaking sweat. He was very well prepared, unshakeable, and confident. When it comes to knowing himself, Trump knows Trump. Here are some of my live Tweets from the event as they happened: 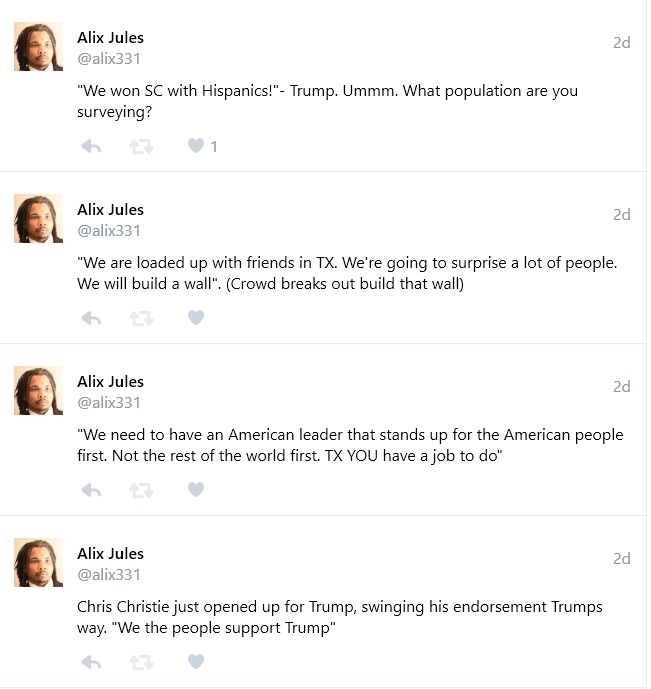 “We the people” was a recurring theme at the event, inside out. It was all about the American “us,” harkening back to the founding of the country. There was red meat for everyone which seemed to galvanize the supporters with every growing moment, which had me on edge.

There were a few protesters inside that ineffectively interrupted the speaker, who skillfully redirected the attention back on the media. I have video below. That’s when I got very nervous. The mood of the crowd shifted. My anxiety pegged. People starting looking at me funny when it happened.  I was immediately reminded about what happened to the BLM protesters a few months ago who were beat up by supporters. Were they going to just assume I was next?

That’s really the only time I went on full high alert, but I was never at ease. Here’s a portion of the video. Forgive the quality, the looks I was getting from some in the crowd impeded my ability to focus.

However, as an atheist, I really started getting concerned when this guy showed up: 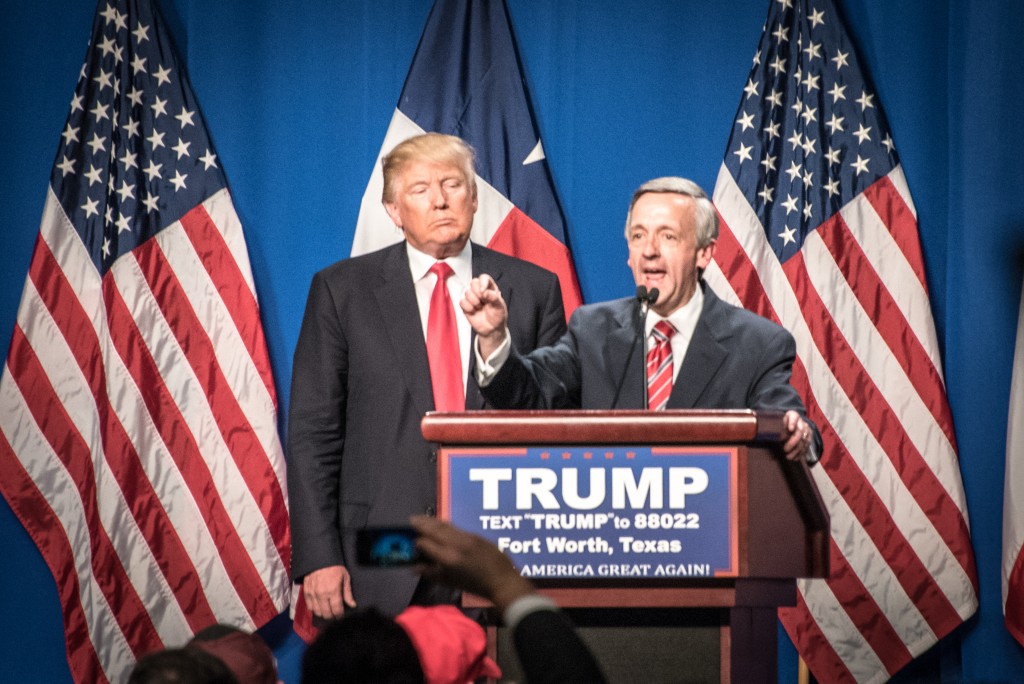 Fox News favorite and local megachurch celebrity, Pastor Robert Jeffress. I learned that Christianity is under siege and without a Trump Presidency, we’ll be even more of a pro-abortion country. 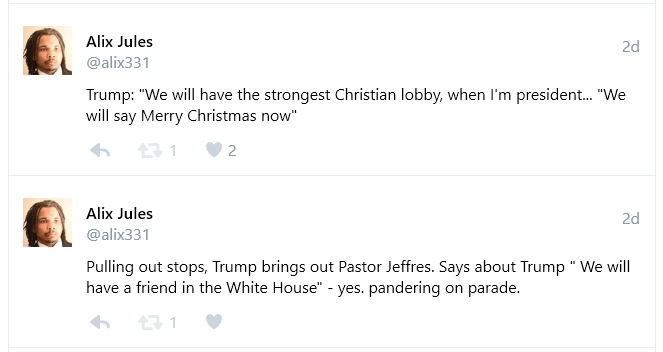 And then the Presidential hopeful went all Godspeak on us, promising the Christian lobby would be the most powerful in Congress.  How much more power can Christians get when nearly every member of the House and Senate subscribes to their theology? Are we ridding ourselves of the few Jewish members? Are we going to institute a religious test or was it another veiled attack on the incompetent Kenyan Negro that sits in the White House today?

It had a very old Southern antebellum feel to it. Pastor Jeffress legitimized any future verbal barrage , warranted or not, on any Barack, Hillary, or Bernie supporter. This group of average, mostly White, Americans would champion their Christian warrior. The speakers’ words were intertwined in high pitched whistles that would call the crowd to vote, fight, or give more money. It was then I realized that these were many of the same average Americans that would’ve shown up after church, with their children for a picnic lynching.

Xenophobia, racism, a near sociopathic lack of empathy, and an overt message of dominant White Christian American supremacy seeped from this event. And they were now empowered by God. That’s when it was time for me to leave.

This guy didn’t scare me: 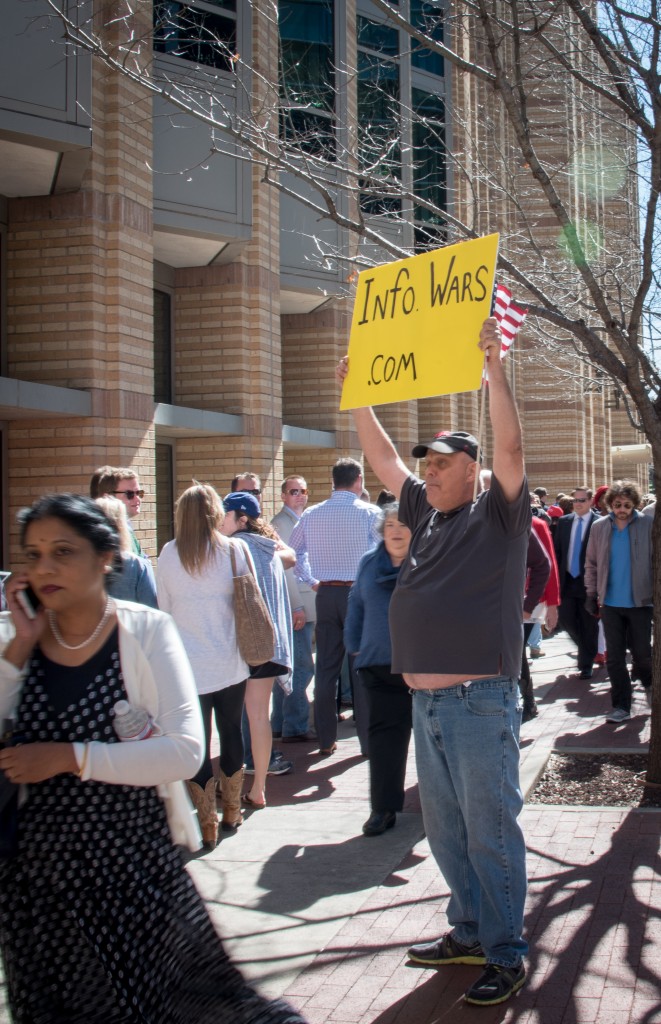 It was the average person uncloaked and dissociated with hate groups, nodding vehemently at every coded, conditioned signal, eating up the message that “we the people,” not them or they, are owed this promised land, reaping all the spoils of the upcoming political war. A surreal naturalistic tribalism.

That’s when I realized, he’s not our next Hitler or George Wallace, no. We’ve been too free in our hyperbolic discourse, failing to see the broader picture with much more recent markers. Donald Trump is an amorphous specter, feeding on the collective river of ooze running under this country consisting of White frustration, fear of equality, fear of retribution, which mergers at the Republican tributary of losing the control of “we the people.”

I finally understood it. Donald Trump is Vigo, the Carpathian, and we’ll need more than Bernie, Hillary, or Jill Stein to beat him, because until you get rid of the ooze, he will always return.
Here’s that extra video I promised:
Photo Attribution: All photos unless noted, property of Alix Jules.

January 26, 2016
Why we can't afford free water from a system that poisons it
Next Post

March 1, 2016 How Trump's Presidency Could Be the Quickest Way to a Functioning Democracy
Recent Comments
0 | Leave a Comment
"Cogent, well-thought, and nicely presented. Not sure what to do with it, however.The State does ..."
HematitePersuasion The Dishonest Self-Appeasement of “Not All ..."
"Why were they allowed to keep flying that flag? Well, keep in mind that when ..."
Nemo Our National Symbol: Why South Carolina ..."
"They deserved to be destroyed because they we traitors who waged war on the United ..."
George Edward Booker Our National Symbol: Why South Carolina ..."
"Approved"
Alix Jules SCOTUS: Prayer OK at Texas School ..."
Browse Our Archives
get the latest from
Nonreligious
Sign up for our newsletter
POPULAR AT PATHEOS Nonreligious
1