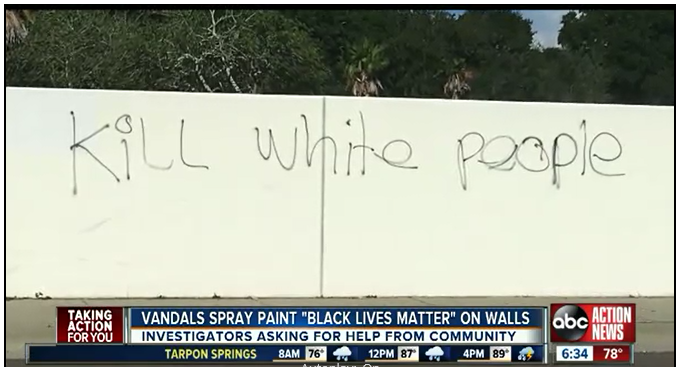 One wall was hit along Gornto Lake Road in Brandon, with the phrase “kill white people” spray painted. Other tags read “black lives matter” and “BLM.”

The problem with this story, as with many of these very specific stories, is that the perpetrator is almost impossible to find or authenticate.

The Hillsborough County Sheriff’s office said they don’t know who did this and it’s not the only damage. Less than a 10 minute drive away, a trailer was hit with similar messages. The Trump sign in their front yard was painted over.

We don’t know who did this, nor do I think anyone condones it including organizers of the BLM movement, nor the majority of its supporters.

What we do know is that America wants BLM to go away. Badly. It is inconvenient.

When the murders of the five Dallas police officers happened, BLM activists were the first targeted by police and blamed by its citizens. Even friends and allies to the movement jumped to ‘alt-right’ conspiracy theories based on fraudulent emails discussing a “summer of mayhem.” Those emails, not inconsequentially, were created to do the same thing this kind of vandalism is designed to do. Reduce or remove support for the organization and taint its image. The aim is to create a false equivalence of mutual hate, instead of change.

America needs BLM to fail and these kinds of events are too familiar with what we saw during the earlier stages of the Civil Rights Movement. Even our government targeted groups like the Southern Christian Leadership Conference, the Black Student Union, and the original Black Panther via the counter intelligence program. COINTELPRO was real. A legitimate government program that used infiltration, psychological warfare, harassment via the legal system, and illegal force to bring those groups down. All to maintain control and peace of the status quo, since many civil rights groups that were becoming increasingly more vocal. Unrest disrupts order and forces change in law.  A literal attack on “Law and Order”.

I’m not saying there is a government conspiracy to take down BLM. I have absolutely no proof of that, nor do I suggest it. We do, however, have a significant amount of proof that suggest that “Alt-Right” supporter and many angry disenfranchised White citizens of our country would go to these extremes. We’ve seen it. And not to nit-pick, but the language also doesn’t compel me. That’s not what Black hatred of Whites or the White Power Structure looks like. Its usually more… colorful. In addition, the “BLM” message and the “Kill whoever” message are usually mutually exclusive. Its not the same sentiment, except in the minds of those that would shut BLM message down. So in the current climate that targets BLM and its image, this seems suspicious. Had this been North Carolina, Ferguson a few years ago, or Baltimore prior to their their uprising, I might be more inclined to believe it, because Rage and Riot are cohorts. 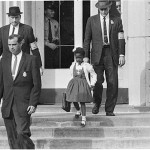 September 28, 2016
What Ruby Bridges Can Teach Us About Racism 56 Years Later
Next Post

September 29, 2016 Green Stacks, not Blue Lives Cause Dallas PD Exit
Recent Comments
0 | Leave a Comment
Browse Our Archives
get the latest from
Nonreligious
Sign up for our newsletter
POPULAR AT PATHEOS Nonreligious
1

Of Hybrid Embryos, Human Rights, and...
Roll to Disbelieve
Related posts from The Graffiti Wall