The Perfect Gift for your Religious Family

I recently finished Living the Secular Life by Phil Zuckerman. It was a great sociological assessment by a sociologist. I was quite confused at first because I am used to ‘atheist’ books the question god and ‘humanist’ books with lots of life lessons. I was confused at first, until I realized this was not such a book, but rather a survey of the reality of living a secular life. It was fascinating, for me as one living a secular life, to read about my demographic from an objective perspective. But as Zuckerman says, this book is more for the non-secular: “An initial goal of this book, then, is to disabuse Americans of their dislike or distrust of the secular” by showing the reality of secular living. With such an important message and effective delivery, I declare this to be the perfect Christmas present.

note: This article will be one of occasional cross-posts with the Military Association of Atheists & Freethinkers.

Zuckerman reports on secular living for societies and individuals, for parents, students, and soldiers, and dealing with death and grief. He starts by identifying a sort of ‘implicit’ moral teaching in secular society as opposed to the direct moral teaching from clergy to laity in the religious tradition. Zuckerman returns to the topic with the story of Deborah who seeks to bring her children from a childish punishment-based moral system to a more resilient commitment to universal ethical principles.

The story of Amber I found particularly inspiring and insightful. The book goes into detail, but she tells how after a horrible accident her secular values provided particular comfort. While religious people who were around her struggled with why god had allowed their injuries to occur, she was able to reconcile with a natural world and focus directly on her recovery. I think this chapter on dealing with grief will be of particular help to secular folks and religious people trying to understand the secular perspective.

It might have been a coincidence of what I noticed, but I seemed to see an abiding fixation with death and dying. There was also some assumption that secular means essentially humanist. It’s a bit like reviewing “Christian” culture without distinguishing between Pentecostals and Mormons. Zuckerman does spend time (p 63-66) recognizing the fuzziness of the secular category. He even distinguishes some secularists who are more laid-back and people like himself who are, in his words “quite religious” in their secularism. He even covers the secular qualities of some religious people. Though some readers may prefer depth in terms of categories, the individual stories provide broad variety and detail.

There are several military references as well, including Iraq veteran Scott Renfro whose experiences caused him to rethink his evangelism and opt for a secular life. Also mentioned are the Naval Academy Freethinkers & Atheists.

I also recommend reading an excellent interview between Zuckerman and Sam Harris. Their discussion covered some interesting international expressions of secularism, including Muslim apostates, and the difference between secularism in the east and west.

As we skeptics do, it’s important to distinguish between a purely journalistic activity (nothing wrong with that) and a report from an expert in the field. Professor Zuckerman has a PhD in Sociology from the University of Oregon and has previously authored several books on the sociology of secularism. Just as the American Religious Identification Survey out of Trinity College and Pew Research Center studies have provided demographic assessments, Zuckerman’s books provide insight into the secular demographic that is now maturing in America. He is a pioneer in the field, having established a secular studies program at Pitzer College.

Go out and gift this to your favorite religious family member. They’ll understand you better and hopefully spread the word that we secularists come in peace. 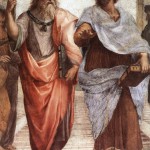 December 3, 2014
A Place for Religion in a Faithless Future
Next Post 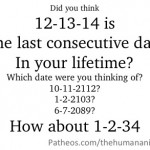 December 14, 2014 The phenomenon of 12-13-14
Recent Comments
0 | Leave a Comment
"Here's your biology and chemistry mr. kraut: http://www.newgeology.us/pr...Plus you can throw in the Human Conscience. ..."
Todd Only a mortal Jesus is worthy ..."
"Thank you for posting this, Jason. It is touching and appropriate."
Cooch96 RIP Greg Plitt, West Point, PETA, ..."
"Huh? I have heard of the Alcubierre drive, but I was never under the impression ..."
drakvl We are not entitled to warp ..."
"OMG thank you! I'd forgotten all about the concept of light coming *from* the eye ..."
☽ Majorana Fermion ☾ Cognitive Biases unknown until 1972
Browse Our Archives
Follow Us!