In this month’s audio podcast we’ve got celebrities and the media on the brain. First we interview 60 Minutes commentator Andy Rooney about his atheist beliefs, then we record a “Humanist StoryCorps” with the National Secular Society of U.K. about their work promoting secularism in the media.

Andy Rooney is America’s favorite curmudgeon, known for his commentaries on the CBS news program 60 Minutes and for his syndicated newspaper column. Most people know Rooney for his lighthearted, somewhat perplexed observations about everyday things. But in this short interview with HNN, Rooney gets serious about his atheism. He also shares his views on all the faith talk coming from the candidates in the presidential election.

Segment 2: Spokesmen for Secularism in the U.K.

Terry Sanderson is the president of the London-based National Secular Society. Keith Porteous Wood is the executive director of the National Secular Society. In this segment, the two secular activists swap humorous stories about appearing in the national media spotlight. They also explain their recent victory in seeing the blasphemy laws repealed in Britain. As part of the celebration of the repeal of these laws, they convince a famous Shakespearean actor (who also appeared in the Lord of The Rings) to read one of the blasphemous poems that had been subject to prosecution under the blasphemy laws. Not the most dignified role this famous actor has played, but one that he accepted enthusiastically nonetheless.

Buy at Pre-order from Insound
More On This Album

Buy at Pre-order from Insound

More On This Album 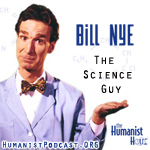 August 5, 2010 The Humanist Hour #53: Bill Nye the Science Guy, Humanist of the Year
Recent Comments
0 | Leave a Comment
Browse Our Archives
get the latest from
Nonreligious
Sign up for our newsletter
POPULAR AT PATHEOS Nonreligious
1

'Joseph Masturbated In The Corner, Too'...
Laughing in Disbelief
Related posts from The Humanist Hour