In this month’s podcast, Jes Constantine and Todd Stiefel interview satirical musician Roy Zimmerman, Australian freethought singer / songwriter Shelley Segal, and rational rocker Bruce Harris from Words Such As Burn, about their experience as atheist artists in the music industry.

Humanists and atheists are saddened by the death of the prolific writer and outspoken atheist Christopher Hitchens, who died Thursday, December 15 at the age of 62 after battling esophageal cancer.

Todd and Jes share some of their winter holiday traditions and discuss (er, um, debate) their opinions on Holiday music. Tell us what you think! What / How do you celebrate for the winter holidays? Do you listen to holiday music? What kind?

Zimmerman’s fourth CD is a Holiday offering called PeaceNick. It’s Lefty, Pacifist, Humanist satire celebrating the birth of the Prince of Peace in a time of pre-emptive war. The disc takes a snipe at militaristic merchandising with “Buy War Toys for Christmas,” and thumbs its nose at the War on Christmas – an absurd notion promoted by Bill O’Reilly and his ilk – with the Happy Holidays song “Christma-Hanu-Rama-Ka-Dona-Kwanzaa.” The Dylan-esque “Christmas is Pain,” another Zimmerman classic in the mold of another Zimmerman, receives wide airplay every Holiday Season.

Roy Zimmerman has made a “campaign promise” to perform in all fifty states before the election. He’s checked off fifteen states so far.

Shelley Segal is a singer-songwriter from Melbourne, Australia. Growing up in a musical family, Shelley began singing at age three. She started writing songs and performing from the age of eleven.

Shelley plays guitar and piano. She teaches vocals, music theory and song-writing and has been performing live, around Melbourne and internationally, for the last ten years. She completed a Bachelor of Applied Music at the Box Hill Institute of Tafe in 2010. Shelley has recently written and recorded a song with DJ Carl Cox. The track, ‘Chemistry’ spent two weeks at #1 on the techno charts in November 2011.

Over the last few years, Shelley has become involved in the secular movement and it is a cause that she sees as indispensable. In response to her views, this year Shelley has recorded and released, ‘An Atheist Album.’ The seven songs on the album are her thoughts on religion and related themes, through the prism of her secular humanism.

Shelley’s musical style is influenced by commercial, folk, jazz, blues and rock genres. As a songwriter, Shelley’s music is often biographical and story-telling in nature.

In 2012, Shelley will be releasing two albums, touring Australia and will be performing in April at the Global Atheist Convention and in June at the American Humanist Association’s Annual Conference.

Segment 5: Words Such as Burn

Words Such As Burn was born in Raleigh, NC when Bruce Harris said, “we have a gig in two weeks” and was met with the reply, “who is we?” Before these words, the future WSAB members had never played music together with just the five of them. What started as a rotating group of random friends jamming in a basement, became a band scrambling to put together a set. Nobody will ever know why a non-existant band was asked to perform live, but 14 days later, WSAB played their first show.

A year and a half later, Words Such As Burn continues with their original lineup of Bruce (vocals & bass), his brother Sammy Harris (drums & recording engineer), Chris Holcomb (lead guitar), and the father-son combo of Charles (keyboard) and Todd Stiefel (rhythm guitar). Their songs come from an eclectic mix of various rock genres ranging from blues, punk, hard, heavy, grunge, alterative, classic, and modern. Words Such As Burn simply loves rock-n-roll in all of its incarnations with inspirations ranging from The Ramones to The Strokes, and from The Animals to The Black Keys.

Their first single is “Flow”, a song about what religion costs us, believers and unbelievers alike, in terms of lost relationships. It speaks of the pain that can be brought by the divide between atheists and theists, while offering hope of what could be. In an effort “to let love flow,” all of the band’s proceeds from the song will be donated to charity and 40% of the net sales of all other songs will be donated as well.

Other available Words Such As Burn songs include originals “Fallacy One: Argument from Ignorance”, “Over You” and their cover of “I Got Mine”. Their music is the ultimate in modern DIY, with it all recorded, mixed and distributed from their homes.

Words Such As Burn links: 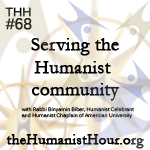 December 2, 2011
The Humanist Hour #68: Serving the Humanist Community
Next Post

January 30, 2012 The Humanist Hour #70: Humanist Community Project at Harvard
Recent Comments
0 | Leave a Comment
Browse Our Archives
get the latest from
Nonreligious
Sign up for our newsletter
POPULAR AT PATHEOS Nonreligious
1

Russell Moore: Not Really a Hero
Roll to Disbelieve
Related posts from The Humanist Hour