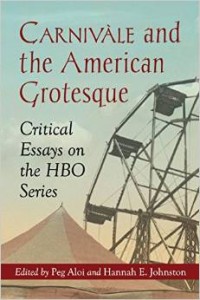 Carnivale and the American Grotesque: Critical Essays on the HBO Series

Summary: HBO’s Carnivale was a critically-acclaimed, elaborate period narrative set in Depression era America that set the stage for the current explosion of cinematic storytelling on television. Despite an ambitious and unusual storyline, remarkable production design and stellar cast, the show was cancelled after only two seasons. No other television series has been so steeped in history, spirituality and occultism, and years later it retains a cult-like following. This collection of fresh essays explores the series through a diverse array of topics, from visual aesthetics to tarot symbolism to sexuality to the portrayal of deformity.