Sufferings Are Nothing Compared To What Is Coming

“I consider that the sufferings of this present time are not worth comparing with the glory about to be revealed to us. 19 For the creation waits with eager longing for the revealing of the children of God; 20 for the creation was subjected to futility, not of its own will but by the will of the one who subjected it, in hope 21 that the creation itself will be set free from its bondage to decay and will obtain the freedom of the glory of the children of God. 22 We know that the whole creation has been groaning in labor pains until now; 23 and not only the creation, but we ourselves, who have the first fruits of the Spirit, groan inwardly while we wait for adoption, the redemption of our bodies”.-Romans 8:18-23

It has been a rough year.  I don’t think there is a person alive who thinks that this has been the best year ever.  The sufferings that we have endured have not not been easy.  We have a global pandemic, threats of war, riots, and now churches are being vandalized and destroyed.  These things can bring us down, but the second reading from today’s Mass reminds us of the hope that is to come.

Saint Paul was writing to the church of Rome at a time when it was illegal to be a Christian.  Christians were considered atheists because they didn’t worship the Roman gods.  The Roman authorities saw this as them undermining the government and persecuted them harshly.  There is much theology in the his letter to the Romans but one theme is hope.  What we experience here on Earth isn’t even a drop in the bucket in the context of eternity.  Remember the hope that we have in Jesus.

I will be the first to say that it is often hard to remember this when we are in the midst of trial.  The fact is that Jesus never promised us a life without trial.  Quite the contrary.  He said that the world will hate us as it hates him.  However he also promised that he will be with us until the end and never abandon us.  Though we experience various trials that may seen unbearable the Holy Spirit is with us to make them bearable.  Though it is hard to fathom, suffering is a tool that God uses to further mold us into the image of Christ.  So as we go through life remember that there is much more than this life.  We look to the hope of Heaven and being with our king for eternity where there is no sadness or tears. 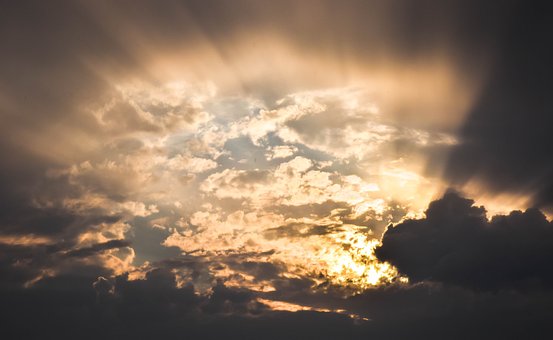 “Those who pray and suffer, leaving action for others, will not shine here on earth; but what a radiant crown they will wear in the kingdom of life!  Blessed be the ‘apostolate of suffering’!”-St Josemaria Escriva

“A cross carried simply, and without those returns of self-love which exaggerate troubles, is no longer a cross. Peaceable suffering is no longer suffering. We complain of suffering! We should have much more reason to complain of not suffering, since nothing makes us more like Our Lord than carrying His Cross. Oh, what a beautiful union of the soul with Our Lord Jesus Christ by the love and the virtue of His Cross!”-St. John Vianney

“To the prospect of the Kingdom of God is linked hope in that glory which has its beginning in the Cross of Christ. The Resurrection revealed this glory — eschatological glory. … Those who share in the sufferings of Christ are also called, through their own sufferings, to share in glory”.-St John Paul II

July 11, 2020
Temple Visions: The Lord Is Calling Each Of Us
Next Post

July 13, 2020 Sharing Your Catholic Faith Story With Nancy HC Ward
Recent Comments
0 | Leave a Comment
"Excellent presentation. I have found that what matters most is the "posture" of the heart ..."
John A Matter Of The Heart
"I agree with you 100%. The bishops have instructed everyone to receive on the hand ..."
aggiegirl2000 A Matter Of The Heart
"After seeing exactly how screwed up Christian Conservatives are, worshipping a man that is immorral. ..."
Prax You Are With Jesus Or With ..."
"Jesus or Beelzebul? I'll take curtain three, thank you. I don't DO Fear religions."
Kyllein MacKellerann You Are With Jesus Or With ..."
Browse Our Archives
Related posts from The Pursuit of Holiness