Mass is hard for me.

When I was a teenager, my father forced us to go to daily Mass for about two years. I know this doesn’t sound that bad, but when you couple this with his particular brand of religious domestic violence and my crippling scrupulosity, it was toxic. I would sit in the pew for a half hour, debating with myself whether or not I could receive communion. As soon as I’d convince myself I should receive, my doubts, fears, and panic would attack me, convincing me of the opposite. The idea that somehow I’d committed a mortal sin was an all-consuming spiritual OCD.

If I skipped receiving Communion too many days in a row (because not receiving was psychologically easier than playing the ping-pong guilt game), my father would interrogate me as to why and chastise me that if I needed Confession, I’d better go. I remember one summer where I went to confession more than once a week.

I’d find any excuse I could to avoid Mass. I’d hop in the shower right before my family got in the car. I’d claim I was sick, had a headache, anything. My father’s rage was a better price to pay than sitting in Mass again.

During this time, I began to excoriate my thumb. My elder brother hated this new habit of mine; he called it the “Franken-Thumb.” When I’d start picking, he would grab my hand in his and hold it. I knew his reaction was out of love, but it caused me more anxiety and humiliation each time he did it. It’s a coping mechanism for anxiety, I learned about a year ago from one of my psych major friends. Over the past 8 years, I haven’t been able to break this habit. When I am in a tense situation, I still pick at the skin of now both thumbs, and forefingers, too. At Mass I typically excoriate them till they bleed. (I’ve always hated the Sign of Peace for that reason).

At 23, Mass is still hard for me. I go because I crave the Eucharist, but the rest of Mass often just seems like a PTSD death trap. If it doesn’t cause flashbacks, then it’s anger, and it’s always excoriation.

So I’ve found some ways to cope. I seek out Churches that don’t look like the Traditionalist paradises that my father so loved, with high altars and incense (even though I love both). I find Churches that are a bit darker, with hidden alcoves, empty choir lofts, or pillars to sit behind, so that the claustrophobia of so many other souls doesn’t become too smothering.

I bring a book (usually a spiritual memoir by Jessica Mesman Griffith) and a journal and pen. I try to remember my fidget cube or silly putty, to circumvent the excoriation. And then I sit and read, ignoring the rubrics that command me to stand and kneel and “be attentive” until the Consecration, when I put my book down and adore my Lord.

I explained my method to a priest in Confession once, a few months ago, waiting for him to chastise me. I told him I feared it was a sin, to distract myself from Mass this way. But, it was the only way I could manage to attend, I said. Otherwise I’d probably just stay home.

He shocked me, this priest, by telling me he thought it was beautiful. I’d found a way to honor my obligation out of my love for God, despite the suffering and the hardship. He compared it to going to an art museum, and spending the whole visit staring at one art piece, examining its beauty and its depth, treasuring it.

So, I continue my method, when I can. Often, when I’m not reading, I’m writing—processing grief or anger at my past, or reflecting on a snippet I caught from the readings or the homily. I’ll be posting these reflections here; I hope reading them helps you find some peace. Writing them maintains mine. 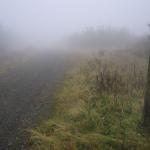 March 5, 2018
Welcome to the World Beyond the Pale
Next Post 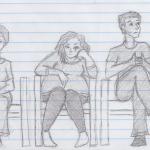 March 7, 2018 Confession Line Angst
Recent Comments
10 Comments | Leave a Comment
Browse Our Archives
get the latest updates from
The Shoeless Banshee: Meanderings Beyond the Pale
and the Patheos
Catholic
Channel
POPULAR AT PATHEOS Catholic
1