Finding Hope with Empty Nets – Lessons from St. John of the Cross

Finding Hope with Empty Nets – Lessons from St. John of the Cross May 1, 2019 Tina Mayeux 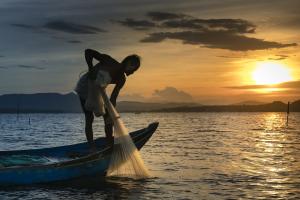 As Christians, in life we are often like Peter and the other disciples in John’s gospel who went fishing in the Sea of Tiberias and came up with empty nets all night.  Try as we might, sometimes when we put out to sea we end up with only fish tales when return to shore.  This happens when we make plans and efforts on our own without entrusting the mission to God and following his lead and direction, and when we rebel against God as we encounter difficulties. We all experience disappointment and discouragement, and often even suffering in our journey with Christ. How we respond to it determines whether we learn to find joy and meaning in the hardship or become disillusioned and succumb to despair. We are even taught by the saints that suffering is beneficial to the soul.  St. Vincent de Paul is quoted as saying “If we only knew the precious treasure hidden in infirmities, we would receive them with the same joy with which we receive the greatest benefits, and we would bear them without ever complaining or showing signs of weariness.”

What do we do when our efforts are not rewarded with success? How do we respond to failure and defeat? The gifted Spanish Carmelite mystic St. John of the Cross knew well the frustration and despondency of desolation and seeming failure.  After leaving the Calced friars and undertaking the reform of the Carmelite order in Spain with St. Teresa of Avila in 1567, the two began founding reformed monasteries around Spain, to the dismay of the Calced Carmelite friars.  In response, the friars abducted and imprisoned St. John of the Cross for nine months, accusing him of disobedience.  Actually, the reform of the Carmelite order had been approved by the papal legate and he was no longer under obedience to the Calced Order.  He endured not only discouragement, but also unjust suffering, including hunger, cold, illness, and other tortures, including immense pressure to abandon the cause of the Discalced Carmelites.  However in his distress, St. John of the Cross did not become bitter or angry, but, through prayer, united his sufferings with Christ’s and, through his affliction, created some of the finest spiritual poetry to date, principally the Spiritual Canticle.  During the darkest period of his life came the most profound and beautiful verses on suffering and love, which express his anguish and longing for the Lord:

“Where have You hidden Yourself,

And abandoned me in my groaning, my Beloved?

I ran after You, crying; but You were gone.”  (Spiritual Canticle, Stanza I)

St. John’s words convey the sadness and sorrow he was feeling, yet he did not react bitterly toward his enemies.  He showed them mercy and forgave them, directing his pain to Our Lord, who, in turn, inspired the poetry that the saint was able to create.  The Lord used the devastating situation that St. John of the Cross endured and turned it around to become the vehicle for him to compose  these incredible spiritual masterpieces that guide and inspire us still today.

The world today runs from failure and suffering, and certainly, in themselves, these are not things to be sought after.  However, our Christian faith reminds us that, when we do face hardships, good can come of them.  St. John of the Cross said, ” Love consists not in feeling great things but in having great detachment and in suffering for the Beloved.”  He is an expert in accepted suffering, and he teaches us invaluable lessons on the purifying action of enduring the trials we encounter in life for the sake of the Beloved, who is Christ.  When we suffer well, we are purified and our souls are made more holy and like his and we are purged of our faults and sinful inclinations.

The rift between the Calced and Discalced Carmelites was formally ended in 1580 by Pope Gregory, and St. John of the Cross went on to continue to establish monasteries across Spain.  His spiritual writings and poetry live on and inspire us today, and he was canonized in 1776 and declared a doctor of the Church in 1926.  One of the lessons we can learn from the life of St. John of the Cross is that, when we are faced with disappointments and discouragements, we should not give in to sadness or bitterness, but humbly submit to Christ in love and accept our crosses as both Jesus and St. John did. Our Lord can transform our sufferings into successes if we allow him to take control and guide us.  Just as the disciples pulled in from the sea at dawn, facing the disappointment of a completely unsuccessful expedition, Jesus was there on the shore to guide and direct them to success: “‘Cast the net over the right side of the boat and you will find something.’ So they cast it, and were not able to pull it in because of the number of fish.” With patient endurance and obedience to Christ, we, too, will find our nets filled and bear abundant spiritual fruit.

May 5, 2019 Patrons for the #metoo movement?
Browse Our Archives
get the latest from
Catholic
Sign up for our newsletter
POPULAR AT PATHEOS Catholic
1

The Sheep And The Good Shepherd
One of the more interesting and perhaps one of the most important...
view all Catholic blogs
Copyright 2008-2021, Patheos. All rights reserved.