The Way of the Wildflowers
Catholic

Three Ways to Reduce the Stigma of Mental Illness 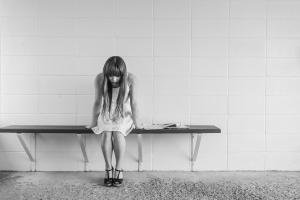 “Love one another as I have loved you.” Why do we have such a difficult time with this one phrase?  Compassion.  Understanding.  Patience with one another.  Empathy – especially empathy.  From experiencing hardships in life I have learned a very important lesson – to be kind, because everyone you meet is carrying a heavy burden.  I have also come to understand that not everyone thinks, believes, and acts like me or the way I expect them to; that we are all different, but at the same time, all loved by God.  Just because you don’t understand a person’s particular cross or burden doesn’t mean you should ignore or exclude them.  We should all be more compassionate and considerate of others and take the time to get to know one another again.  We have forgotten the basic rules of kindness – it is as simple as taking the time to reach out to others who are suffering and offering a listening ear or a helping hand. One group who is especially in need of understanding are sufferers of mental illness. As Catholic Christians, the corporal works of mercy oblige us to love and care for those who are ill, and this includes those with a mental health diagnosis. Praying for them is crucial; however, to truly be disciples of Christ we must do more.

According to the National Alliance on Mental Illness, approximately 1 in 5 adults in the U.S. (46.6 million) experiences a mental illness; however, there is a lack of understanding and discussion about this issue. People who struggle with depression and anxiety and other mental illnesses face a brutal stigma from the rest of the world.  Living with this affliction is always difficult, and, in its worst moments, mental illness can be downright nightmarish.  Adding to the difficulty is the judgment, the exclusion, and the ostracism from those who do not understand and lack compassion.  The pain from being judged and misunderstood is sometimes much worse than the effects of the illness itself.  How much lighter the load would be if others showed love, compassion, and respect for those with mental illness.  If only sufferers had the same support, care, and concern we show those who are battling cancer and other diseases, it would exponentially soften the burden for them.  Just as in recent years awareness has been raised of the need for compassion and understanding for sexual assault victims and those suffering with same-sex attraction, so is there the need for a similar campaign for sufferers of mental illness

The Problem of Suicide

Suicide can be a result of untreated mental health conditions. According to the NAMI website, in the U.S. today the 10th leading cause of death is suicide, and it is the 2nd leading cause of death for people aged 10–34. More than 90% of people who die by suicide exhibit symptoms of mental illness.  It is the most heartbreaking and tragic consequence of mental illness, and it happens all too often. On June 5, 2018, successful handbag designer Kate Spade took her own life after struggling with bipolar depression.  In an article from The Guardian at the time of her death, her sister Reta Saffo says that she was not surprised by Spade’s suicide.  Saffo says Spade neglected to seek treatment out of concern for the negative publicity she expected to encounter and the harm she feared would come to her brand. Because of the stigma involved, she avoided getting the care she needed which could have saved her life. Here are three small steps we can take to begin to eliminate this stigma and increase understanding and support:

1. Educate Yourself and Others

Even if you do not have a diagnosis, chances are you have a family member or friend who does.  There are numerous resources to educate and inform yourself on the facts of mental illness and how to help someone who does have a diagnosis. The National Alliance on Mental Illness (NAMI) is the largest grassroots organization working to provide support and education for those who suffer with mental illness and their family members and caregivers. There are many important facts about mental illness here at NAMI’s website, and you can find helpful ideas about how to assist someone facing a mental illness on the Family Members and Caregivers page.

2. Reach out to those in need

If you have a friend or family member who you know is suffering, reaching out can provide immense comfort and solace to them.  Many people isolate and avoid social encounter when they are facing depression, anxiety and other conditions. Simply offering a listening ear and being a friend can give the person much needed support and boost recovery. NAMI suggests viewing your support of the family member or friends as a learning process.  Listening to the patient and practicing good communication are essential.  It is also important to encourage the person to follow his or her treatment plan to ensure the best possible chance of recovery.  More ideas on supporting recovery are listed here.

We need to increase and expand an open and honest conversation about  mental illness to begin to reduce and eventually eliminate stigma.  Presently, those who suffer often hide their diagnosis and difficulties out of fear or shame.  Like Kate Spade did, they attempt to deal with it alone or with very little support, which can often end catastrophically.  Mental illness is a physical ailment, a brain disorder, and should be treated as such.  It does not discriminate, but affects people of every age, race, and socioeconomic class.  A tremendous burden will be lifted from the shoulders of those who suffer when we eliminate the shame and secrecy surrounding it.  Some celebrities such as Demi Lovato, Catherine Zeta-Jones, and a host of others have bravely revealed their battles with mental illness in order to inspire and help others who suffer. For those who have lived through a mental health condition and are managing it, sharing your story with others can help to bring hope and inspiration to those in the depths of this devastating disease.

The Saints and Mental Illness

We look to St. Dymphna as the patroness of those who have mental illnesses.  Born to a pagan king of Ireland, Dymphna was secretly baptized.  When she was 15, her mother died, leaving her father distraught and searching for a bride to replace his wife.  When no suitable wife could be found, he proposed to Dymphna, who refused.  She and her confessor fled the country, but both she and the priest were beheaded by the king when he located them in Belgium.  St. Dymphna became known as an intercessor for those suffering with mental, emotional, and spiritual maladies when five “lunatics” slept at the site where she was martyred and awoke miraculously cured.

St. Therese of Liseux and her father, St. Louis Martin, both experienced bouts of mental difficulties.  Therese, after the death of her mother and the loss of her oldest sister to Carmel, endured a nervous breakdown at the age of nine, which confined her to bed until her cure by the smile of a statue of the Virgin Mary.  In addition, she suffered from scrupulosity, or exaggerated sense of sin, which can be a form of OCD, and the last period of her life was riddled with darkness and doubts as she slowly declined from tuberculosis.  After Therese’s departure for the Carmelite convent herself, her father’s mental health began to deteriorate and he eventually was sent to an asylum, which was humiliating for him and for the family.  Despite his illness, Pope Francis canonized both Louis and his wife Zelie on October 18, 2015, at which time they became the first married couple in the Church’s history to be canonized.

July 7, 2019 On the Advantages of Conflict
Browse Our Archives
Related posts from The Way of the Wildflowers