The Way of the Wildflowers
Catholic

In Pursuit of the Truth: St. Teresa Benedicta of the Cross 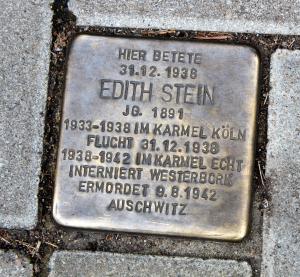 In this past Sunday’s gospel reading, Jesus gives us the parable of the rich fool, who, after a bountiful harvest, presumed he could retire and live a life of carefree luxury. Conversely, God tells the rich man that his life is required of him this very night. The man realizes that although he has abundant material possessions, he has failed to prepare for what is truly important, eternal life. The lesson of this parable for us is to guard against greed and an overemphasis on wordly cares and possessions and, instead, to focus on working toward the Kingdom of heaven. Similarly, in Matthew’s gospel, Jesus warns us, “Do not store up for yourselves treasures on earth, where moth and decay destroy, and thieves break in and steal. But store up treasures in heaven, where neither moth nor decay destroys, nor thieves break in and steal. For where your treasure is, there also will your heart be.” (Matt 6:19-21) In contrast to the rich fool, on August 9 we celebrate the life of a saint who sought after truth during her life and discovered it in God and the Cross, and who diligently prepared for the life to come. During her life, Edith Stein labored to store up this treasure in heaven and received her heavenly reward when she went to the gas chambers at Auschwitz-Birkenau in 1942.

Edith Stein was born in 1891 in Breslau, Poland, the youngest of eleven children of a Jewish family, on Yom Kippur, the Day of Atonement. As a teenager she abandoned prayer for a time and began to study philosophy. At university, she was mentored by and served as assistant to Edmond Husserl and during this period met the philosopher Max Scheler, who introduced her to Roman Catholicism.  She was a tireless pursuer of the truth and her years of spiritual searching brought her over time to discover Christ. When she read the Autobiography of St. Teresa of Avila, she responded, “This is Truth,” and the desire to enter Carmel took root in her heart.

On January 1, 1922 Edith Stein was baptized and entered the Church. Over the following years she was a teacher at a girls’ school and a lecturer. When the Nazis came to power in Germany in 1933, she could no longer teach and entered the Carmel in Cologne, receiving the religious name Teresa Benedicta of the Cross. During this time she completed many of her various writings, which are studied today.  She, along with her sister Rosa, was arrested Aug 2 1942 at the Carmelite convent in Echt in the Netherlands where the two had been smuggled. Her last words heard at the convent were spoken to Rosa, “Come, let us go and die for our people.” She was deported to Auschwitz and, along with many of her people, was sent to the gas chamber on August 9, 1942.

A Woman of Faith and Prayer

St. Teresa Benedicta of the Cross was beatified on May 1, 1987 by Pope John Paul II in Cologne and was canonized on October 11, 1998 by the Holy Father in St. Peter’s Square. She is the first saint since the end of the apostolic age to have been born and raised in a Jewish family. A lecture by Fr. John Sullivan, a Carmelite Friar, on the life and writings of St. Teresa Benedicta can be viewed here on the Boston Carmel’s website.  According to Fr. Sullivan, St. Teresa Benedicta was a woman of deep faith and prayer and a “great interpreter of Carmelite life,” and she has much to teach us today through her life and writings.

Four Elements of Her Life

According to Fr. Sullivan, there are four main elements of St. Teresa Benedicta’s life that stand out:

This prayerful reflection is a practical bit of wisdom taken from her writings which describes how we can handle the difficulties and failures that we sometimes encounter when working for the Kingdom of heaven: “The Lord is indeed there and can give us in a single moment what we need. Thus, the remainder of the day will continue, perhaps in great fatigue and laboriousness, but in peace. And when night comes and retrospect shows that everything was patchwork, and much which one had planned left undone, when so many things rouse shame and regret; then take all as it is, lay it in God’s hands, and offer it up to God. In this way, we will be able to rest in God, actually rest, and begin the new day like a new life.”

(Image by Bernhard Riedl from Pixabay)

August 7, 2019 Living an Interior Life in an Instagram World
Browse Our Archives
Related posts from The Way of the Wildflowers

Trying to Justify the Bomb – Stories and...
Seventy-seven years ago the United States unleashed the power of the atom...
view all Catholic blogs
Copyright 2008-2021, Patheos. All rights reserved.
Close Ad