Our Lady of Sorrows and the Messages of Akita, Japan 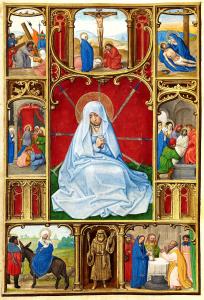 In 1973, a Japanese nun by the name of Sister Agnes Sasagawa is reported to have received messages from the Blessed Mother. Upon entering the Institute of the Handmaids of the Holy Eucharist, near Akita, Japan, Sister Agnes suddenly became completely deaf. She experienced the stigmata and apparitions, during which she was entrusted with messages for the world. Our Lady emphasized repentance and prayer in her apparitions to the nun. A wooden statue of the Virgin Mary was reported to have wept from January 4, 1975 until September 15, 1981, and the stigmata was noted on the statue as well. Miraculous events surrounded the apparitions at Akita. Sr. Agnes says she had visions of angels and was visited by her Guardian Angel. The angel is said to have told Sr. Agnes, “The wounds of Mary are much deeper and more sorrowful than yours.”

Connection to the Feast of Our Lady of Sorrows

The statue is reported to have wept for the last time on the feast we celebrate this weekend, the Feast of Our Lady of Sorrows, September 15, 1981. As had been predicted by the Blessed Mother in the apparitions, Sr. Agnes’ hearing was restored on May 30, 1982. In June 1988, Pope Benedict XVI approved the Akita events as “reliable and worthy of belief.”

An Echo of Fatima

The messages of Akita echo those of Fatima and focus on the importance of prayer and penance, especially the prayer of the Rosary. During one of the apparitions in 1973, Sr. Agnes reports the Blessed Mother telling her, “Many men in this world afflict the Lord. I desire souls to console Him to soften the anger of the Heavenly Father. I wish, with my Son, for souls who will repair by their suffering and their poverty for the sinners and ingrates.” Just as she did at Fatima in 1917, Our Lady urges her children to respond to her warnings, informing us that, “Prayer, penance and courageous sacrifices can soften the Father’s anger.”

Our Lady spoke of chastisements and calamities which will occur if the world does not convert and repent of sin. She predicted that evil and sin would infect the Church, even to its highest ranks. Her words on October 13, 1973, the anniversary of the Miracle of the Sun at Fatima, included the following, “The work of the devil will infiltrate even into the Church in such a way that one will see cardinals opposing cardinals, bishops against other bishops. The priests who venerate me will be scorned and opposed by their confreres, churches and altars will be sacked. The Church will be full of those who accept compromises and the devil will press many priests and consecrated souls to leave the service of the Lord. The demon would be especially implacable against souls consecrated to God. The thought of the loss of so many souls is the cause of my sadness. If sins increase in number and gravity, there will be no longer any pardon for them.”

Our Lady of Sorrows

On this Feast of Our Lady of Sorrows, we recall the hardship of Our Lady, who suffered during her life and alongside her son Jesus during his Passion and death on the Cross. The seven sorrows of Mary are:

Along with the Seven Sorrows of Mary during her life on earth, we can remember the messages of Akita this day, on which the weeping of the Japanese statue is said to have ceased. We are reminded that Our Lady suffered not only during her life, but still she sheds tears for her wayward children who have abandoned her Son and persist in error and sin. It is a day to remember how much she loves us and desires that we be saved so that we can spend eternity in heaven. She is the most admirable of all mothers, and she loves her children and gently guides us to Jesus. More details about the events at Akita, Japan can be found here.

September 22, 2019 The Mystical Union of St. Pio of Pietrelcina
Browse Our Archives
Follow Us!

OPINION: Uproar Over Role Of Women...
Coffee & Crucifix
Related posts from The Way of the Wildflowers

Pope's Prayer Intentions for February 2020
It's late in the month to publish this. But I missed it...
view all Catholic blogs
Copyright 2008-2020, Patheos. All rights reserved.