Looking for Food for Thought? Here’s the Buffet

Are you xenodochial? If you’re not sure what this means … it’s something we advise children not to be, but something we wish more adults would be.

It’s from the Greek language, and it’s a highbrow way of saying someone is friendly to strangers. (I translated Greek in college for two years and never stumbled across the term.)

I bring it up because it’s one of the few emotions we can experience that begins with the letter X. It’s also one of over 600 emotions I’ve researched and listed in the Thinkadelics Table of Emotions PDF file. 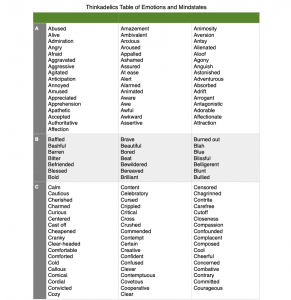 You can download it now by clicking the link or chart to your left. It’s not the most exciting read, so you might want to wait until you’re ready to fall asleep. But if you check it out now it will give you a rush regarding the range of emotions we can experience!

And yet, this chart represents just a list of emotions, along with terms designating a few mental states you’ve likely experienced. To get a real handle on how complex our thoughts can be we will have to go deeper.

It’s estimated that on any given day we all experience roughly 6,000-70,000 thoughts per day! That’s a lot, even if we think the number is in the lower range. The reason for the wide variation is because researchers define a thought in many different ways. Some count every random thought and others count a train of ideas as one complete thought. For example, in the span of 12 seconds I can visualize at least a dozen places I’ve visited. So, I could easily surmise this as 12 thoughts. However, if I’m counting a single train of thought, which includes 12 locales, then I merely had one thought.

As it turns out, there’s an excellent new study that further explains our trains of thought. I’ll quote a summarization of the main point by Satviki Sanjay of VICE below, but you can delve into the “heady” study here for more in-depth information.

“Dr Jordan Poppenk and his student Julie Tseng … have established a method that, for the first time ever, can detect where one thought ends and another begins. …a phenomenon they described as a ‘thought worm.'”

That’s a monumental achievement! And I really like the metaphor they use, “thought worms.” This term offers great insight into how thoughts burrow through the neural networks of our mind; tugging at memories, inspiring imagination, conjuring up mental images, and all the while triggering within us certain emotions and mental states.

Obviously, when we think about our own “thought worms” we know that the emotions I’ve listed in the PDF file represent just one component of thoughts we can experience. The reality is our thoughts involve a host of other complex variables, which don’t just affect our brains, but also our bodies. Here’s just a few of the major variables:

Our thoughts under the microscope

And yet, we can conceptualize thoughts on a far more microscopic level. Think about the cellular dynamics involved in human thinking. In this purely materialistic view thoughts are comprised of nothing more than matter and energy. Specifically, thoughts are the processes of the neurons, cells, chemical reactions, and the electrical energy within our brains, all of which are generated by the sensory inputs from our bodies.

We should also recognize that thoughts can also occur within an ethereal or spiritual frame of reference. Which is to say, that many religionists believe their thoughts are influenced by supernatural agencies. Or, like in the case of avid meditators, otherworldly thoughts and thinking patterns can be achieved by reaching deeper meditative states. Now, whether thoughts are influenced by the supernatural, or that they can help us achieve higher states of being, is open for debate. My point is that many seek meaning in life through spiritual sources, and this adds yet another diverse layering to the complexity of our thoughts.

All of the above makes our task of understanding the “anatomy” of our thoughts all the more fascinating and precarious. For thoughts don’t only represent silly notions like why elephants aren’t born pink, but thoughts can and do alter the course of our lives.

As I alluded to above, the human mind is a marvel. Similar to the physical universe we dwell in, it’s filled with yet-to-be-discovered wonders. For those up to the challenge, taking the time to sit and “watch” how our own “thought worms” move through your mind is an enlightening experience.

About Scott R Stahlecker
Scott Stahlecker is the author of the novel "Blind Guides, “Picking Wings Off Butterflies,” and “How to Escape Religion Guilt Free.” He is also a former pastor and previous owner of several hospice agencies. There are a lot of websites that offer a place for believers and nonbelievers to debate. Thinkadelics is different. It’s about looking at life with a fresh, freethinking perspective. You can read more about the author here.
Previous Post 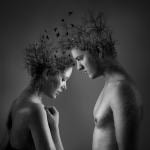 September 14, 2020
The Art of Being a Freethinker
Next Post

September 17, 2020 Social Media: The Driving Force of Misinformation and Lies
Recent Comments
1 Comment | Leave a Comment
Browse Our Archives
get the latest from
Nonreligious
Sign up for our newsletter
POPULAR AT PATHEOS Nonreligious
1

One response to “Looking for Food for Thought? Here’s the Buffet”