When it Comes to Journalistic Integrity Think of Marie Antoinette

Although I write about newsworthy events often, I’m no journalist. Which is why I have a huge respect for journalists who relentlessly chase down reliable sources and facts before they dare share what they’ve investigated.

I’m also merciless when it comes to journalists and news agencies that lack integrity. When journalists or major media outlets share stories that rely on false or misleading information, then like Marie Antionette beheaded by the guillotine, I want heads to roll. Figuratively speaking, of course. I don’t literally want reporter’s heads to be cut off. What I mean is that journalists who deliberately tell lies to advance their career should be severely reprimanded or fired.

Whether you lean to the political left of right, here’s a link regarding just a few of the many reporters who have lied or stretched the truth in the past, along with details about how they met their own guillotine.

Coincidentally, as I write on this topic multiple mainstream media outlets are covering a story in which FOX host Tucker Carlson just admitted to frequently lying.

“I guess I would ask myself, like, I mean I lie if I’m really cornered or something. I lie. I really try not to. I try never to lie on TV. I just don’t – I don’t like lying. I certainly do it, you know, out of weakness or whatever.” Tucker Carlson

I guess you could say I’m old-school when I say that reliable facts and data are important to me. If you’re wondering when the new-school season started that changed how much people value journalistic integrity, it was at the advent of social media. For when it comes to social media facts don’t matter as much as likes, thumb’s ups, retweets, shares, and all the other emojis social media platforms have devised to infuse reporters with a fresh supply of dopamine.

About the psychology of being liked on social media . . . https://medium.com/swlh/likes-on-social-media-87bfff679602

Does anybody else see how that might be a problem?

According to the PEW Research Center 53% of U.S. adults regularly get their news from social media, or a full 36% from Facebook alone. (Now, that’s a lot of photoshopped memes and alternative fact posts, which over time, must erode a person’s ability to cognate complex issues.)

In addition, consider this: There’s just one man, Mark Zuckerberg, who ultimately determines what, when, and how Facebook’s algorithms will feed you your own personalized dish of propaganda. That’s 2.79 billion followers! all under the control of 1 man.

Can mainstream media be trusted?

The short answer is no. These days nobody should trust any single source or confab of media companies, because most of them these days exhibit a particular political bias.

The long answer is yes. You see, while it’s true that mainstream media sources are in the business to make money, this doesn’t mean that its reporters are spreading false information. Fortunately, many mainstream media companies are still old-school in that they have integrity and value honest reporting. These companies and their reporters understand that a loss in integrity equates to a loss in revenue. The reporters who work for these companies also understand that if their reporting is false then they might also suffer a loss in revenue, such as not getting next month’s paycheck.

In contrast, this “integrity = revenue” driven model is not the model of business for typical QAnon platforms, conspiracy theorist’s websites, or other fake-news media outlets. On these platforms the spreading of misinformation—particularly misinformation that counters reporting on mainstream media—is what generates revenue. On these kinds of websites “dishonesty = revenue.”

As for journalistic integrity, the talking heads who spew misinformation are never really axed. But on the off-chance that they are silenced for spreading lies, they usually just move on to more obscure platforms or forums which don’t require a person to be honest or to have integrity.

At the end of the day, people who are seeking the truth are better served by reporters whose heads may roll if they deliberately lie and spread misinformation.

Are You More Inclined to Believe in Fake-News, or to Comprehend Facts?

September 13, 2021
Extreme Times Lead to an Increase in Religious Extremism
Next Post

September 15, 2021 Thanks In Large Part to the Efforts of Non-believers, Afghan Immigrants Enjoy Religious Freedom in America
Recent Comments
2 Comments | Leave a Comment
Browse Our Archives
get the latest updates from
Thinkadelics
and the Patheos
Nonreligious
Channel
POPULAR AT PATHEOS Nonreligious
1

Nonreligious
Extreme Times Lead to an Increase in Religious...
Thinkadelics 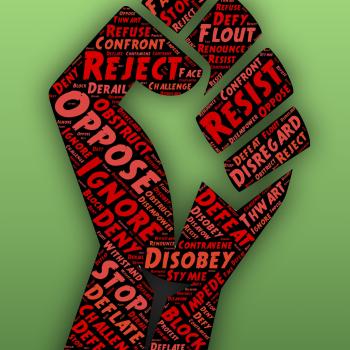 Humanist Morality (I)
I am insanely busy just now - as ever - so here...
view all Nonreligious blogs
What Are Your Thoughts?leave a comment