Get updates from Thinking Rationally delivered straight to your inbox

Part 1 of 7 “I am only responsible for what I say not for what you understand.” 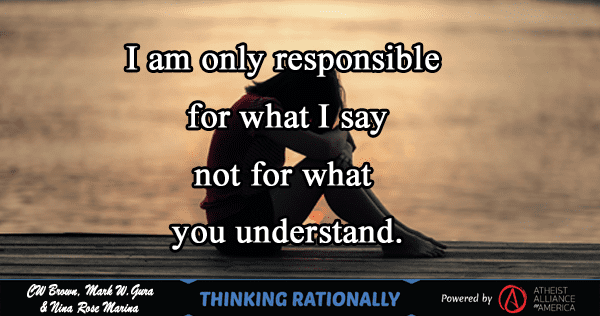 What do you think of when you hear the name ‘Friedrich Nietzsche’? If you’re like most people, your mind probably jumps to images of beady eyes, an intense stare, and, of course, a wildly unkempt mustache! This iconic image of Friedrich Nietzsche—actually taken very late in his life after he had already suffered a mental breakdown and could no longer care for himself—shows up everywhere his name surfaces.

And if you’ve had any kind of exposure to some of Nietzsche’s writings or quotations, then – along with that eerie gaze – you may have some idea of what he thought and taught. After all, isn’t he the guy that said “God is dead”? And didn’t he claim that “there are no facts, only interpretations”? Oh, and didn’t he argue for a philosophy of cruelty and power?

Well, these ideas are certainly in keeping with the popular misunderstandings of Nietzsche and his philosophy. Starting from the time just before his death in 1900, Nietzsche began to skyrocket in public recognition. His ideas and perspectives became highly influential – and often very twisted in the process!

Nietzsche remains one of the most misunderstood and abused thinkers in all of history, but that’s pretty ironic considering how hard Nietzsche worked to explain himself to his readers and how badly he wished to be understood.[1]

Very few people actually approach his writings in the way that Nietzsche himself advised. He wanted to be contemplated, pored over, and ruminated upon—“just the way good old philologists used to read their Horace,” he quips—and he certainly thought, against all odds, that he deserved this kind of readership.[2]

The problem is certainly understandable. In his voluminous published writings, unpublished essays and notebooks, and personal letters spanning the better part of 30 years, Nietzsche penned millions of words, made hundreds of thousands of statements, and argued for thousands of propositions.

And as if all of that weren’t enough of a challenge to getting a handle on who he was and what he thought, Nietzsche’s poetic style is often very difficult to interpret: he regularly employs all the rhetorical and classical conventions of a creative literary artist.

Modern scholars have worked hard to disentangle Nietzsche from the misperceptions about him and his writings, but the caricature of a temperamental, miserly man sitting alone and scribbling away about how he hates everyone and everything has been seared into the popular imagination to such a degree that the struggle to set the record straight has become a gargantuan task of heroic proportions. In the end, only a few may be able to take it on.

I recently borrowed the audio version of Dr. Steven Pinker’s new book Enlightenment Now: The Case for Reason, Science, Humanism, and Progress, and it’s no exaggeration to say that I was completely blown away by it. The material was so well argued, so thought-provoking, and so positive in its understanding of the progress we’ve made since the Enlightenment – especially in the last two centuries – that I experienced a kind of spiritual awakening as a result.

Maybe you can relate: I’d reached a point where anger and disgust at the plight of humanity had all but taken me over. As a student of the social sciences, I knew the values of the Enlightenment were more prevalent now than ever, but the endless parade of ignorance and human atrocity depicted in the media was really taking its toll. But from the moment I hit the play button on that audiobook, I could feel all of that dissipating.

Dr. Pinker’s argument – that progress is real and that our lives and world are on an upward trajectory despite minor setbacks – was just what I needed to hear. And not just that, but the argument he develops over the 500-plus pages of his book is reinforced by mountains of quantifiable data: graph after graph demonstrates just how far we have come in the last century or so—the period for which available data exists.

I’m just so impressed with Dr. Pinker’s breathtaking analysis of the application of Enlightenment ideals to our world, and I don’t know of a more powerful argument for our commitment to the methods of the sciences, the use of human reason, the adoption of ethical humanism, and the march of progress than the one offered by this fantastic book.

So it came as quite a shock to me when, early on in the book, Dr. Pinker made a startling claim about Friedrich Nietzsche. In a chapter entitled “Counter-Enlightenments”, he discusses popular intellectual movements since the time of the Enlightenment that have tried to argue that the Enlightenment’s fundamental values lead to social decline.

In a telling passage that discusses a form of declinism that declares that modern life has made us all sick with peace, comfort, and luxury, he offers this summary:

In the twilight of a decadent, degenerate civilization, true liberation is to be found not in sterile rationality or effete humanism but in an authentic, heroic, holistic, organic, sacred, vital being-in-itself and will to power. In case you are wondering what this sacred heroism consists of, Friedrich Nietzsche, who coined the term will to power, recommends the aristocratic violence of the “blond Teuton beasts” and the samurai, Vikings, and Homeric heroes: “hard, cold, terrible, without feelings and without conscience, crushing everything, and bespattering everything with blood.”[3]

I could NOT believe my ears! Not only is this a complete perversion of Friedrich Nietzsche’s own position on the subject, but the passage sets the stage for things to come where Dr. Pinker’s interpretation of Nietzsche is concerned. He foreshadows as much in the following parenthetical statement: “We’ll take a closer look at this morality in the final chapter.”[4] This morality? I mean, sure, I was intrigued, but I can NOT overstate the unease that this early mention of Nietzsche created in me. It was definitely a red flag.

True, the quote is taken from one of Nietzsche’s late writings, Toward a Genealogy of Morality (1887), but here the passage has been ripped from its context and has been used by Dr. Pinker to illustrate a point that is diametrically opposed to how Nietzsche intends the passage to be understood.

And only a few pages later, Dr. Pinker defers to Arthur Herman’s charge in The Idea of Decline in Western History (1997) that the “prophets of doom are the all-stars of the liberal arts curriculum,” and guess who heads the list of these so-called pessimists: Friedrich Nietzsche.[5]

Another red flag went up. I wondered to myself, Doesn’t Dr. Pinker know that Nietzsche was no pessimist? In fact, Nietzsche even explicitly identified the point in his life when he stopped being a pessimist—when he was gravely ill at around age 35[6]—but still I was intrigued. How could such an eminent intellectual have gotten Nietzsche so wrong?

[1] Friedrich Nietzsche, Ecce Homo: How One Becomes What One Is, Preface, 1: “Seeing that before long I must confront humanity with the most difficult demand ever made of it, it seems indispensable to me to say who I am. Really, one should know it, for I have not left myself ‘without testimony’. . . Under these circumstances I have a duty against which my habits, even more the pride of my instincts, revolt at bottom—namely, to say: Hear me! For I am such and such a person. Above all, do not mistake me for someone else.”

[2] Ibid, Why I Write Such Excellent Books, 5: “That their speaks in my works the voice of a psychologist without equal, this is perhaps the first conclusion at which a good reader will arrive—a reader such as I deserve and one who reads me just as the good old philologists used to read their Horace.”

[6] Friedrich Nietzsche, Ecce Homo: How One Becomes What One Is, Why I Am So Wise, 2: “It is in this light that I now regard the long period of illness that I endured: it seemed as if I had discovered life afresh, my own self included. I tasted all good things and even trifles in a way in which it was not easy for others to taste them—out of my Will to Health and to Life I made my philosophy. For this should be thoroughly understood; it was during those years in which my vitality reached its lowest point that I ceased from being a pessimist: the instinct of self-recovery forbade me to entertain a philosophy of poverty and desperation.”

September 15, 2018 Establishing Some Street Cred
Recent Comments
1 Comment | Leave a Comment
"You wrote: "Plenty of reasonable claims can't be falsified. Do you believe "All men and ..."
Jed Rothwell Science and Religion
"What's the probability of Hiroshima or Nagasaki not being how the physical universe operates and ..."
al kimeea Astrophysics
""Saying that science is better than religion isn't saying much,"Said by every pseudo-scientific numbnutter ever.So, ..."
al kimeea Science and Religion
"Yes, of course humanity knows more about the nature of the universe today than we ..."
San_Ban Where Life Came From
Browse Our Archives
get the latest from
Nonreligious
Sign up for our newsletter
POPULAR AT PATHEOS Nonreligious
1 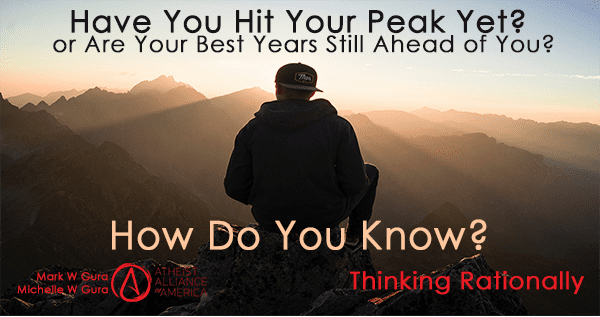 Nonreligious
Have You Peaked Yet or Are Your Best...
Thinking Rationally 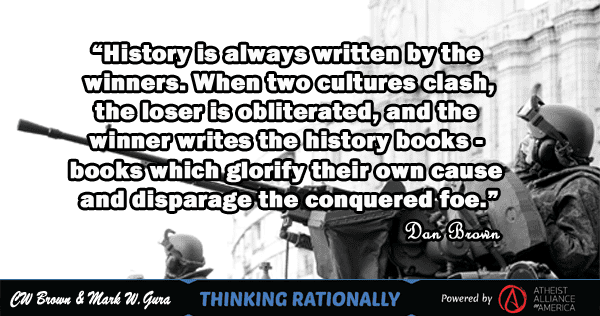 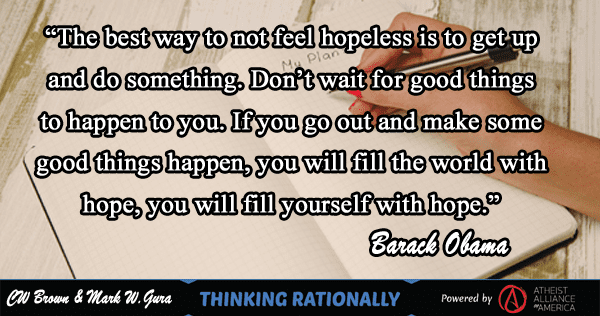