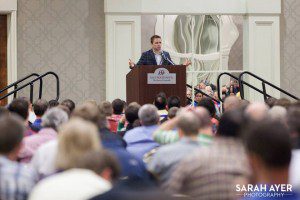 Dr. Strachan speaks regularly at conferences, churches, and other events.

In the past, he has spoken at Together for the Gospel 2014, the CBMW National Conference, chapel at Southern Seminary, Boyce College, California Baptist University, and Criswell College, and churches that include Cornerstone Baptist of Detroit, Brookside Church of Omaha, and Valleydale Baptist of Birmingham.

Strachan also speaks regularly at academic conferences. He has presented multiple times (every year from 2009-14) at the annual meeting of the Evangelical Theological Society.

To contact him about speaking, write to owen.strachan [at] gmail.com.

January 15, 2015 | Cedarville, Ohio
Dr. Strachan will speak in chapel at Cedarville University on the theme “All You Have to Do Is Risk it All.”

January 23-25, 2015 | Calgary, Alberta (Canada)
Dr. Strachan and Mrs. Jodi Ware will be speaking at Calvary Grace Church in Calgary, Alberta on “The Goodness of Biblical Manhood and Womanhood.”

February 20-21, 2015 | Louisville, Kentucky
Dr. Strachan will be a breakout speaker at the SBTS “Resolute” collegiate conference.

February 26, 2015 | Nashville, Tennessee
Dr. Strachan will participate in a panel on “Protecting Marriage: How to Get the Media Message Right for This Generation” (with Eric Teetsel, Ryan Anderson, and Penny Nance) at Proclaim, the national conference of the National Religious Broadcasters association.

March 4, 2015 | New Albany, Indiana
Dr. Strachan will speak in chapel at the Christian Academy of Indiana.

March 14, 2015 | Louisville, Kentucky
Dr. Strachan will be a breakout speaker at the SBTS “Reknown” conference.

March 21, 2015 | Hartford, Connecticut
Dr. Strachan will give an address and breakout at the Iron Sharpens Iron conference.

April 18, 2015 | Gaithersburg, Maryland
*Dr. Strachan will be a plenary speaker on manhood at Covenant Life Church at the Mid-Atlantic Men’s Conference in Gaithersburg MD.

May 16, 2015 | Worcester, MassachusettsDr. Strachan will give an address and breakout at the Iron Sharpens Iron conference.

September 24-27, 2015 | Dominican Republic
Miguel Núñez, Owen Strachan, and Tim Challies will be speaking on marriage, manhood, and leadership at the Por Su Causa conference of the International Baptist Church in the Dominican Republic.

October 22, 2015 | Spokane, Washington
Dr. Strachan will give lectures on complementarianism and the culture for The Spurgeon Fellowship.