Fogelin – In Defense of Hume on Miracles

This is an interesting book review as found in a Hume Society release. I really want to read this book – a defence of Hume on his work on miracles. Hume often gets criticised for his work in this area. Fogelin, by all accounts, takes  a different approach in his defence. And it is a short book, which gets the thumbs up from me.

ROBERT J. FOGELIN. A Defense of Hume on Miracles. Princeton and Oxford: Princeton

With A Defense of Hume on Miracles Robert Fogelin enters the recent discussion on Hume’s treatment of miracles. In this short book Fogelin begins by present­ing his interpretation of Hume’s argument concerning miracles. The second chapter is a lengthy treatment of recent work by David Johnson and John Earman, and the third short chapter is a discussion of the relation of Hume’s view on miracles to his broader philosophy. There are also two appendices and the text of “Of Miracles.”

Fundamental to Fogelin’s interpretation of Hume is the distinction between two ways of evaluating testimony for a miracle. A direct test looks at the qualities of the testimony that tend to make it reliable or unreliable; this is connected with the likelihood of the miracle occurring given the testimony for it. If the quality of the testimony for something, such as a miracle, is high enough, then accord­ing to Hume we have a “proof” of the event attested to. A reverse test looks at the probability of the event attested to, before the testimony is taken into account; this is the prior probability of a miracle occurring. The reverse test can provide a proof against the event if the improbability of the event is low enough. According to Fogelin, both the direct test and indirect test are important factors in evaluating testimony for a miracle. The basic theme of part 1 of Hume’s essay involves situations in which we have both a proof based on the direct test for a miracle and a proof based on the reverse test against a miracle. In contrast to most interpretations of Hume on miracles, Fogelin argues that in situations in which we have competing proofs for a miracle, Hume does not claim that the reverse test has priority over the direct test or that it is impossible for the miracle to be adequately supported. Fogelin argues that Hume does not claim that no testimony for a miracle can ever be successful; we need to assess the strength of the evidence for the miracle. One problem with this interpretation of Hume, that Fogelin discusses at length, is that most philosophers do not read Hume this way. Many think it plausible to read Hume as giving some sort of argument to the effect that no testimony could ever support a miracle, and several passages seem to indicate that because of the nature of testimony and laws, no testimony could support a miracle. Fogelin responds that this position faces the serious problem that Hume gives an example of a speciﬁc miracle that he would accept on the basis of testimony (eight consecutive days of darkness). Fogelin emphasizes that Hume gives no argument that might plausibly be interpreted as an a priori argument against miracles, especially any simple a priori argument that relies on it being conceptually impossible for a miracle to occur.

Although many commentators think that part 2 is not important to Hume’s argument, on Fogelin’s reading it is of crucial importance. Since Hume allows that testimony could be sufﬁcient to support a miracle, in part 2 Hume investigates direct proofs for miracles, and concludes that no testimony can be strong enough to support a miracle being a basis for religious belief. Fogelin notes that Hume does

allow that testimony may support a miracle, but only if the miracle is not intended to be the foundation of a religion. Thus on Fogelin’s reading of Hume’s argument, part 1 is used to set the standard that any testimony for a miracle must pass, and part 2 argues that no testimony for a miracle can meet that standard. Both parts are essential to a proper understanding of Hume’s argument; the argument would be considerably weakened if either were ignored.

Fogelin calls critics of Hume who ignore part 2 and interpret Hume as giving an a priori argument “gross misreaders” of Hume. In chapter 2, Fogelin begins by discussing David Johnson’s Hume, Holism, and Miracles, which he considers to be a gross misreading of Hume. Fogelin discusses several arguments he ﬁnds in Johnson’s book, such as the charge that Hume’s argument is circular, obscure,

question begging, and relies on an a priori argument. Johnson says that a Hu­mean argument must show that one witness to a miracle can never outweigh the testimony for a well-established law of nature. Fogelin understands this to show that Johnson is demanding an a priori argument (presumably based on part 1 of Hume’s essay), and responds that no such argument can claim to be Hume’s argument. Given that Johnson’s interpretation of Hume is quite different than Fogelin’s, it is not surprising that Fogelin classiﬁes Johnson as a gross misreader of Hume.

John Earman is not a “gross misreader” of Hume’s essay, but is what Fogelin calls a “subtle misreader” of Hume. In Fogelin’s discussion of Earman’s Hume’s Abject Failure he focuses on the claim that Hume was committed to some version of the straight rule: if a large number of As are observed and all of them are Bs, then the probability of all As are Bs is 1. According to Fogelin,

Earman’s criticism turns on a single claim: Hume’s argument, he holds, depends on a commitment to what Earman calls Hume’s straight rule, and that rule has disastrous consequences. The evidence he cites in favor of this attribution is Hume’s frequent use of strong conclusionary language. I have argued that his speaking in this common sort of way does not warrant our assigning to Hume a commitment to an unpalatable version of the straight rule. (53)

All of Fogelin’s criticisms of Earman are based on Earman’s attribution of the straight rule to Hume. Fogelin argues that Hume does not accept the straight rule, because it runs counter to both the general structure of Hume’s essay on miracles and to Hume’s fallibilism, which lies at the core of his philosophical standpoint (53). Indeed, on Fogelin’s interpretation Hume turns out to be much closer to Bayesianism than many would think.

But although it is true that Earman thinks Hume adopts the straight rule, much (if not most) of his discussion is not based on that claim. Earman is well aware of the technical problems that arise from using the straight rule to set the probability of a miracle to 0. Although it may surprise Fogelin to ﬁnd Earman being charitable towards Hume, as a result of problems with the straight rule, Earman sets aside his belief that Hume is committed to some version of the straight rule and in latter chapters of his book he explicitly assumes that the probability of a miracle is greater than 0. This allows Earman to discuss aspects of Hume’s argu­ment that do not rely on adoption of the straight rule. I would like to have seen Fogelin discuss Earman’s treatment of Hume’s “general maxim” and main thesis; these are very important parts of Earman’s discussion of Hume, and Fogelin’s treatment of Earman would have been much better if he had discussed Earman’s arguments on topics other than the straight rule. As it stands it is difﬁcult to see why Fogelin’s arguments give a reason to think Earman’s main criticisms of Hume are misguided.

A Defense of Hume on Miracles is clear, well-written, and contains a sustained argument for Fogelin’s interpretation of Hume on miracles. Fogelin is aware that most philosophers interpret Hume differently, and in this book Fogelin gives a nice defense of his interpretation of Hume. It is customary for a reviewer to make a recommendation on whether or not to read a book; in this case this is easy to do. Why would anyone who is interested in the subject of Hume on miracles not want to read a well-written book full of arguments whose body is only sixty-two pages long?

December 31, 2012 Happy shall he be, that taketh and dasheth thy little ones against the stones - Boney M's missing exegesis
Recent Comments
0 | Leave a Comment
"Your comment is even visually presented as though it were bible verse. I’m sure that ..."
Geoff Benson Pearced Off! #1 – Perfection as ..."
"I don't think there's anything benign about any of the creation myths, certainly not the ..."
Luke Breuer Well Done God: Counting the Hits ..."
"That doesn't include an explicit reference to the non-tiki torch-carrying people. Which people were they ..."
Luke Breuer Dumbing Down
"This is getting much too lengthy for me to respond fully.Yes, it was so long ..."
Luke Breuer Replying to Comments
Browse Our Archives
Follow Us! 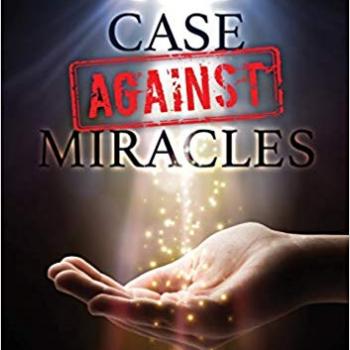 Nonreligious
Kiekeben: Can One Actually Believe in Christianity?
A Tippling Philosopher