Shocker. Absolute shocker. Such ignorance. As the Huffington Post reports: 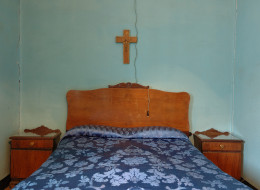 Police discovered the emaciated 19-year-old at a housing estate in Grigny, a southern Paris suburb, where she was allegedly bound to a mattress for a week in the position of Christ. AFP reports the girl was found dehydrated, in a state of shock and showed signs of having been beaten.

Four former members of the Seventh-Day Adventist Church, including the victim’s boyfriend, are accused of carrying out the week-long crucifixion of the Cameroonian teenager to expel ‘her demons’.

The church said it expelled the four accused members in 2010 and stressed thatexorcism of this kind cannot be justified by any of its teachings, according to the International Business Times. The Seventh-Day Adventist Church is a U.S.-based millennialist Protestant church with more than 17 million members worldwide, according to its website.

All four of the accused are facing charges of kidnapping and acts of torture and barbarism, but have denied all acts of violence.

Prosecutors say the accuser’s boyfriend and alleged instigator, Eric Deron, had delusions of being a prophet on a divine mission.

According to statements released by the accused, the exorcism was organized after the victim allegedly leapt on her boyfriend, Deron, whilst babbling incomprehensibly, which led him to believe she was possessed by the devil.

The victim, known only as Antoinette, testified in court that her captors kept her alive by feeding her minuscule portions of water and oil, NineMSN reported.

Court is expected to resume until Friday.

Nonreligious
Trump Is Saving "Religion Itself" from Communism...
A Tippling Philosopher
TRENDING AT PATHEOS Nonreligious