The “I”, personhood and abstract objects

The “I”, personhood and abstract objects June 27, 2014 Jonathan MS Pearce

I have talked about abstract objects many times before, such as here. It is a fundamental area to almost everything in philosophy and is not debated nearly enough. We had a Tippling Philosophers’ debate in the pub last night about the ‘I’ and personhood, which came down to whether they really existed as concepts or not. I actually deny the continuous ‘I’. 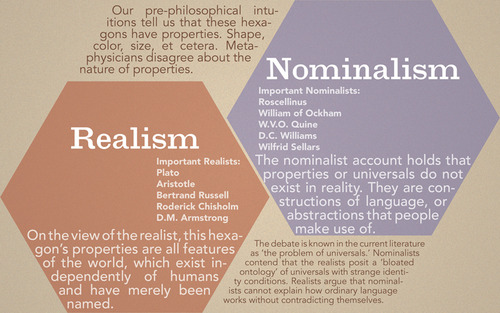 We had a really good discussion at TPs, talking about what the ‘I’ is that experiences and whether it persists over time, what it entails etc etc.

Anyway, I talked about how the discussion depended upon abstracts and whether they exist or not. This is what I said on email:

Twas a good night. Some fascinating discussion to be had…

Guy, on nominalism vs realism (whether abstract objects exist outside of our brains), I have written a sort of beginner’s guide here, based on the famous philpapers survey question:

It is important in the world of maths. I have just edited a book by a mathematician looking at this exact thing, such that maths is a DESCRIPTION of reality, rather than prescribing it. Numbers don’t ‘exist’ out there, but are our mental abstracta, and we should not confuse the map with the terrain.

Given that personhood is an abstract label ascribed to x or y properties, is that relationship really real? The fact that we all disagree on what constitutes personhood, or a hero, or anything, evidences the notion that these labels are merely conceptual, and exist nowhere but in our heads.

On personhood, we talked a little about Dennett:

I think these are taken from his riginal 1976 chapter found here:

Fascinatingly, there are cross-cultural and temporal differences as to how personhood is perceived. Guy, this runs contrary to your ‘walks like a duck’ thesis, since there are many different ideas of the duck, it seems!

“Personhood continues to be a topic of international debate, and has been questioned during the abolition of slavery and the fight for women’s rights, in debates about abortion,fetal rights and reproductive rights, in animal rights activism, as well as in debates about corporate personhood.[2]

Processes through which personhood is recognized vary cross-culturally, demonstrating that notions of personhood are not universal. Anthropologist Beth Conklin has shown how personhood is tied to social relations among the Wari’ people of Rondônia, Brazil.[3] Bruce Knauft’s studies of the Gebusi people of Papua New Guinea depict a context in which individuals become persons incrementally, again through social relations.[4] Likewise, Jane C. Goodale has also examined the construction of personhood in Papua New Guinea.[5]“

Guy is a fellow TPer who is a recent addition to the group and with whom I have had some big discussions before about free will, naturalism, psychology and science. There has even been some poetry! Here is what Guy responded:

Thank you Rob for chairing the meeting last night. Very stimulating. I’ve read the definitions of realism and nominalism given by Jonno on SIN. Not sure that I can see the relevance of it to the discussion last night. Would appreciate help making the link. I obviously don’t understand its applications nor Jonno’s zeal about its importance. Dennett’s list seems reasonably sensible and chimes with what most in our western tradition would assume about personhood. I remain unmoved from my grammatical argument i.e. that the moment a verb is uttered a person is implied and that grammatical persons derive from the fact of personhood which is something which is irreducible in some way. If it was reducible then utterance could not take place and all our discussions become meaningless or irrelevant. Got the impression this was close to Descartes last night – Cogito ergo sum or Sum ergo cogito. If I is not then thought can’t occur. The existence of I in a real sense is a condition of thought and debate. If you dissolve I you dissolve the validity of debate as debate is predicated on the assumption of a set of I’s. This really is like Heisenberg or even Schroedinger. Try to move a muscle to dissolve I and you dissolve your tongue (or kill the cat). The only response to this is acceptance of a set of conditions in which we live which are a given. Having made this acceptance the game of debate can begin. If you doubt the existence of the centre court no tennis will be played (sorry to labour the point).

Were I pressed I’d begin my list of what personhood is as below. I’d also suggest that society assumes most of this in many forums – the legal, the social etc. I’d go on to say that these “properties” are derived from the general experience of most people (or persons!), most of whom would agree on them. I accept that the Watusi tribe of the Upper Amazon may have a different view. I’d say that the list below is the fullness of personhood or its potential fulfilled. I’d also suggest that this is a sane view, although I’m sure that word will cause a few misgivings!

I has unique identity of which it is aware

I is morally responsible and accountable

I is aware of the mortality of myself

So I need to show that the nominalism debate is key to the debate about the I and personhood. That should be pretty straightforward, I hope.

Most everything in philosophy is about abstract ideas. In this case, Guy (and everyone else) were talking about personhood, amongst other things. The claim was that a person is labelled such if they had, say, X and Y properties. This claim, that personhood has such properties, relies on this abstract idea of personhood. Personhood is an abstract label ascribed to certain properties. For example, Guy claims that they are X and Y, someone else A and B. The idea of this is that if anyone is true, this relationship, this abstract idea must truthfully and really exist mind independently. That is the definition of objective.

So what this means is that an abstract idea must have mind independent ontology. It must have existence outside of conceiving brains.

Our  brains conceive of all sorts of things. We have agreed, amongst us, through language, that certain properties constitute a table. But other cultures, animals, aliens, would not ascribe those properties to that idea or label.

Take morality. The properties we ascribe to good have changed over time, and differ from culture to culture. We often agree on a lot because our brains, desires and experiences are very similar. But just because we have developed language to describe these ideas doesn’t mean they poof into mind independent existence. Their ontology still exists entirely in our brains or conceptions.

This idea that abstract ideas are conceptual is called conceptual nominalism. The idea that they are somehow real, or ontic, in a mind independent sense, is called (Platonic) realism.

This can really well be explained by looking at the abstract concept of a species. As I have written elsewhere:

Many apologists attack evolution, and attack the notion that species can evolve into new species, and that there is no transitional fossil evidence for X, Y and Z. However, what they do not realise is that there is no such thing as a species (in a manner of speaking). Objectively, such an idea does not exist. ‘Species’ is a label that we humans have attached to groups of organisms that we see common characteristics between. We also tend to attach arbitrary rules to them too, such as they cannot interbreed with another species, otherwise they are effectively the same species etc. What this labelling does is give a false impression that a) species are static; and b) that these labels define these organisms whether humans exist or not. These labels are human constructs – that is all. Every organism is constantly shifting its genetic blueprint.

We can see this with age. We label something ‘adult’ just like we do ‘personhood’. But what makes someone an adult and not a child? Does something magic happen from one second to the next on the stroke of midnight on the 18th birthday? Of course not. And each individual person is different. The idea of an adult is a conceptual construct which does not exist without human minds to conceive it. Just like personhood. And table. We can take one molecule, leg, two legs off of the table and we might all disagree on whether that thing still qualifies as the abstract idea of the table.

What is interesting is that Guy was nominalistic about aesthetics when we discussed it (and I very much agreed with him there, for this very reason). Therefore, there might be a double standard by rejecting nominalism in this other context.

In conclusion, personhood is a human, conceptual construction which we attempt to define into existence with language. It is not, however, real or ontic in a mind independent sense. The best we can do is perhaps agree on what those conditions are. Consensus, though, does not make something pop into existence, or make something true. It provides, here, a pragmatic way of seeing the world. If all of us disagreed on every abstract object, there would be chaos. We create dictionaries to attempt to define these ideas, but even these change over time, drop out of fashion, and new ideas and concepts pop into usage (selfies) and some self-appointed arbiters of language define these abstract labels as being used enough to go into a dictionary (they actually use statistics to help there).

June 27, 2014
Rbutr - being intellectually robust on the internet
Next Post

June 30, 2014 Scott Lively and Ruining Uganda
Recent Comments
0 | Leave a Comment
Browse Our Archives
get the latest from
A Tippling Philosopher
Sign up for our newsletter
POPULAR AT PATHEOS Nonreligious
1