In the beginning there were the Colonies. 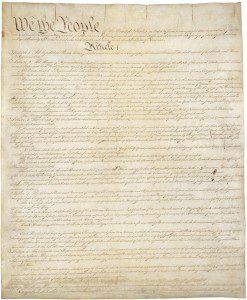 And the Colonies were without form.

And the King named George oppressed the Colonies.

And the Colonies rose up and smited George’s armies and defeated them.

And they created a nation, giving shape and form to the Colonies.

And they called it The United States of America.

And they saw that it was good.

And they created a Constitution, giving all citizens freedom to practice religion.

And the Constitution decreed that the government would neither choose which religion people should practice nor show preference for any religion over others.  It became known as the Establishment Clause.

And the laws of the new nation were not based on the sacred texts of any religion because that would violate the Establishment Clause.

But there were among the people some zealots who believed that their religion was the only right one.

And they tried to establish laws that followed the teachings of their religion.

But others disagreed, and pointed to the Establishment Clause, saying:  “Oh ye of little faith in the Constitution.  Shame on thee!”

But the zealots persisted, and they created a weapon to overcome their opposition.

The weapon was a word, but what a word!  It was a word that would strike fear and awe into their enemies.  They would fall to the ground and cover their heads with their hands when they heard this word, for it was a great and powerful word, greater than any word the world had ever seen.

And the word was:  Antidisestablishmentarianism.

Surely this word could defeat the puny Establishment Clause.

And once it was defeated, then the zealots could make new laws dictated by their religion.

But their opponents did not fall down in awe of the word.

And they used their swords to cut the word into pieces.

And they showed that one of the pieces contained the word “disestablishment.”

And they argued that this was exactly what the Establishment Clause meant.

But the zealots did not admit defeat and a war ensued.  Not a war of swords, but a war of words…a Culture War.

And that war continues to this day.

Nonreligious
The Trial of Jesus
A Tippling Philosopher