Staks Rosch over at SIN has produced a good little interview of the incoming Executive Director of the Secular Coalition for America (SCA), Larry Decker. It’s an interesting read, and worth a few minutes. There are some fascinating paradigms involved with an “unaffiliated Christian” gay man spearheading the organisation, and how that will play out amongst those in the group and the group’s advocates, but also with the target audience for persuasion (hence mentioning his sexuality). As Staks asks:

2. As an “unaffiliated Christian” why do you think the atheist community should trust you to represent our interests in Washington?

That’s a concern I can absolutely understand and appreciate. I’m not asking anyone to trust me right out of the gate. What I am asking for is the opportunity to earn their trust. I am here for the right reasons. I accepted this position because I believe in the mission of the Secular Coalition for America, I believe in the staff, and I believe that, together, we have the potential to be a leading political force in the upcoming 2016 elections.

I do find one answer worthy of pondering:

Just to be clear, the Secular Coalition for America represents not only atheists, but also agnostics, humanists, and the full spectrum of nontheistic identities.

I am not sure that the SCA doesn’t represent everybody. In fact, there are very good arguments as to why religionists should be secularists, particularly in a pluralist society, as can be seen here and here. 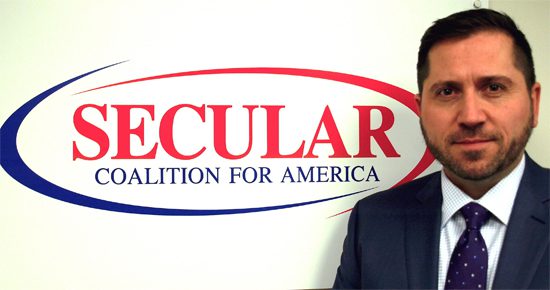 January 26, 2016 "Is God Required for Morality?" Debate vs Peter S. Williams this Thursday
Recent Comments
0 | Leave a Comment
Browse Our Archives
get the latest from
A Tippling Philosopher
Sign up for our newsletter
POPULAR AT PATHEOS Nonreligious
1