In Chapter I, the author says, “I love the Bible.” But at the end of Chapter VI, after compiling a long litany of atrocities, inconsistencies and contradictions, he says that the Bible is so inconsistent that it cannot even be judged false. It is “just so much pernicious gibberish.” That’s a strange kind of love.

Any study of Christianity or its foundational document is a study in factual errors, inconsistencies and contradictions. Critics and apologists have been arguing about this for hundreds of years. Price brings a formidable set of weapons to the battle. After early involvement in a fundamentalist Baptist church in Mississippi, he went on to become a leader in the Montclair State College chapter of the Inter-Varsity Christian Fellowship. He received an MTS degree in New Testament at Gordon-Conwell Theological Seminary, and a Ph.D in systematic theology from Drew University in 1981. He returned to Drew and earned a second Ph.D in New Testament in 1993. He has spent his life studying Christianity and the Bible. 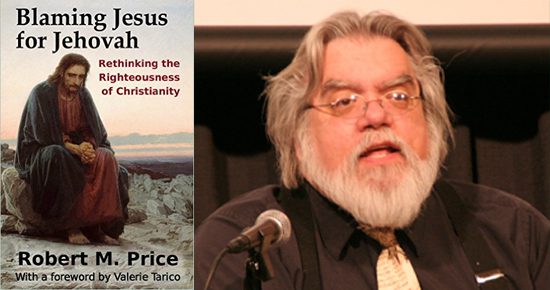 Unfortunately for Christianity, somewhere along the way, Price realized that the emperor had no clothes. Since then, he has written more than a dozen books and countless articles criticizing, discussing and analyzing faith-based beliefs.

Despite his impressive academic credentials, his writing style is direct and even colloquial at times. No pontifications here. For example, in discussing the lack of Hell in the Old Testament (OT), he puns: “But there is no roast for the wicked.”

The central theme of the book is a refutation of the Christian apologist position that the atrocities committed or condoned by the vengeful and violent Jehovah of the OT have nothing to do with gentle, loving Jesus of the New Testament (NT). Price demolishes this with quotes from the Bible itself that make it irrefutably clear that the Trinity of God, Jesus and the Holy Spirit are one and the same. He even quotes Jesus saying that he is here on earth “not to abolish the law or the Prophets, but to fulfill.”

At the end of Chapter VIII, Dr. Price gives an excellent exposition on the subject of Free Will. Free Will is the keystone of the Christian faith, supporting the whole edifice of sin and salvation. If humans do not have Free Will, the edifice collapses.  Price asserts that Free Will is an illusion. He shows convincingly that our actions are largely, if not totally, controlled by our genetic heritage and our upbringing…our life experiences. An individual has no control over his birth or the genetic makeup of his cells. Nor does he have control over early life experiences as a child or often, even as a young adult. How then, can God judge and condemn us to eternal suffering with no hope of redemption? In the OT, when God killed someone, they were dead and he was done with them. But gentle, loving Jesus introduced us to Hell, and the idea of eternal torture. As the author says, the OT is full of cruelties, but the NT is even more cruel.

Dr. Price’s intellectual honesty compels him to follow this line of reasoning wherever it takes him, and it takes him to an uncomfortable question: If it is unjust for God to punish us for our sins, then what about punishment of criminals? His answer is that even though criminals, like sinners, cannot be blamed for their crimes, they must still be held accountable in order to maintain a stable society. Without the prospect of prosecution and punishment for crimes, society would descend into chaos. So we must adopt a “necessary fiction” to make society work. In effect, we must lie to ourselves to solve the practical problem.

Certainly, criminals must be incarcerated to protect the rest of society from their actions. But punishment accomplishes nothing, and is (arguably) not even an effective deterrent since most criminals don’t expect to be caught. The author never mentions the idea of reforming our judicial/penal system to emphasize rehabilitation rather than punishment.

Instead of punishment, we could try to “reprogram” criminals so that they can return to society, by overwriting those early life experiences.  It may even be possible someday to modify the genetic “firmware” that we are born with to eliminate undesirable tendencies. Such genetic engineering is viewed with horror by medical ethicists who fear that tampering with the human genome could lead to the genetically-engineered “Brave New World” of Aldous Huxley, or worse yet, the creation of Frankensteinish monsters.  Religionists oppose it because they believe that God created each person, and we have no right to tinker with His work.

Price himself suggests otherwise in his final paragraph:
“We will cower no longer, fearing we haven’t the right to poach on God’s prerogatives, since they are the prerogatives of our race — to clone ourselves, to reach out toward other planets, to extend life, to control the evolution of the race. Dare to know! Dare to be your own god!”

The author’s undeniable academic credentials, plus a lifetime of study, make him uniquely qualified to write this book. Probably no other person since Robert Ingersoll is as knowledgeable and articulate on this subject. The secular world has lacked such a voice since Ingersoll’s death in 1899. It’s long past time for a replacement, and I hereby nominate Robert M. Price.

March 1, 2016 Which Badge Do I Choose?
Recent Comments
0 | Leave a Comment
Browse Our Archives
get the latest updates from
A Tippling Philosopher
and the Patheos
Nonreligious
Channel
POPULAR AT PATHEOS Nonreligious
1

Intentional Ministries: When Congregations Are Pastors'...
Roll to Disbelieve
Books by This Author Books by Jonathan M. S. Pearce

Nonreligious
The Tower of Babel Story Is OBVIOUSLY Not...
A Tippling Philosopher

Nonreligious
God Is Love: Having a Loving Relationship with...
A Tippling Philosopher
TRENDING AT PATHEOS Nonreligious