Bryan Adams has followed suit from the example Bruce Springsteen and some large corporations in pulling out of a show in Mississippi. As the BBC states:

Bryan Adams has cancelled a concert in Mississippi over the US state’s new controversial religious liberty law.

The law, which allows some private businesses and religious groups to refuse service to gay people, was passed last week.

The singer issued a statement saying he could not “in good conscience” perform in the state.

He added he found it “incomprehensible that LGBT citizens are being discriminated against”.

He was due to play the Mississippi Coast Coliseum in Biloxi on Thursday.

The new law will take effect from 1 July.

Oddly enough, I think such big popular culture names will have the biggest effect, possibly, in changing the minds of those in power. Well, together with massive money-wielding corporations… 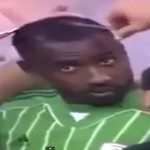 April 10, 2016
Saudi Footballer Made to Have Pitchside Haircut for Un-Islamic Hairstyle
Next Post

April 11, 2016 The Superlative Robert Green Ingersoll
Recent Comments
0 | Leave a Comment
Browse Our Archives
get the latest updates from
A Tippling Philosopher
and the Patheos
Nonreligious
Channel
POPULAR AT PATHEOS Nonreligious
1