Some time back, my friend and SINner over at the Skeptic Ink Network, blogger and clinical psychologist, Dr Caleb Lack (of the Great Plains Skeptic blog) produced a series analysing data and theories concerning correlations between intelligence and religiosity in people. There have been a number of studies, and many people have highlighted and lauded these studies. But the nature of psychological studies is that one has to analyse them very closely in order to decipher when control measures have been carefully put in place, and where researchers have mitigated against issues of, say, self-selection.

As a result, research which broadly equates to (or what people have claimed it equates to) lack of intelligence = religious has prevailed. Caleb looks at a range of research and critically takes them to task to see if we really do have the right to claim such a far-reaching conclusion.

In his introduction, Caleb talks about why this is important:

The issue of intelligence and religion is a heated one in today’s society. Religion plays an important role in the lives of most Americans today. A recent poll found that 83% of Americans claim that religion is at least a fairly important part of their lives and that 82% of Americans considered themselves to be Christians (Gallup, Inc., 2007). A person’s religious values can impact multiple areas of his or her life, from choice of a marriage partner to accruement of wealth (for a review, see Lehrer, 2004). Religious beliefs have also been found to significantly affect people’s opinions concerning education, scientific research, and numerous other areas. A recent public opinion survey of over 2,000 people showed that 60% of white evangelical Christians believe that if the Bible and the will of the American people conflict, the Bible should have a larger influence on U.S. laws (Pew Research Center for the People & the Press, & Pew Forum on Religion & Public Life, 2006). The poll also found that those with little education, those who believe the Bible is the literal word of God, and conservative Republicans are likely to share this view.

In his second post, Caleb looks at the relationship between religious beliefs and education. “As a person’s level of educational attainment is generally related to his or her intellectual ability, this is an area of research relevant to the central question of this series – are non-theists smarter than theists?” And this is perhaps the key to the debate, or to the claims that atheists are often too happy to make. In this way, atheists, in their haste to make such bold claims, are perhaps victim to confirmation bias. Ascribing more value and less critical analysis to data and claims which align to their desires and preconceived ideals. Education appears to be a key player here:

Caleb points out that there is a correlation to education and likelihood toward religious fundamentalism. Of course, this is not intelligence per se, but education. An intelligent person may not have had access to opportunities for quality education. Defining intelligence is, indeed, crucial. The direction of causation here is also interesting to look at. Does being fundamentalist preclude having a good education, or vice versa?

As Caleb points out:

In his third part, Caleb analyses data concerning religiosity and the scientific community, and whether there is relevant correlation between the two. Dr Lack sets out:

Religion and science often espouse contradictory theories, the most publicized in the United States being evolution by natural selection versus creationism. This inherent conflict between the teachings of some religions and the findings of scientists has prompted several studies and articles concerning the religious attitudes of the scientific minds of the last century.  Studies of the attitudes of scientists provide the present study with relevant data on groups of people who are generally well educated and very intelligent.

Results from the above studies suggest thatscientists are more likely to hold agnostic, atheistic, or liberal religious beliefs than they are to hold fundamentalist or orthodox beliefs. Scientists also appear to be significantly less religious than the general population, and those who are members of a church tend to be members of a liberal denomination. The decision to enter a scientific field of study, especially the natural and social sciences, appears to be somewhat guided by religious beliefs, but scientists report that their religious beliefs are not influenced by their chosen profession. Also, those scientists who are at the top of their chosen field appear to be much less religious than the “average” scientist.

But, what does this mean about overall intelligence? Obviously, scientists and engineers are quite intelligent, but does this mean that the non-religious as a whole are smarter than the religious? As we will see in the next post, this relationship is much less clear-cut,

Of course, the correlation fallacy could be at play here. What causes this correlation? Could it be the cognitive functioning of the brain of the sort of people who are more likely to be scientists, which also precludes them from being believers in a personal god, as set out in a recent post concerning research into autism, and gender differences in empathy and belief.

The fourth post hones in a little more on the key question as to who is more intelligent. Caleb summarises the literature as follows, though I strongly suggest reading the post as it is choc full of fascinating analysis:

Findings in studies correlating religious beliefs and intelligence are mixed and unclear. There is a clear correlation between lower religiosity and higher intelligence in the studies on a group of 1930s adolescent Jewish boys and for highly intelligent adults, but no relationship found in a more recent studies of adolescent Christian boys or college students. Methodological problems plague some of the major, large scale studies in this area, casting doubt on whether or not they were even measuring religiosity and/or intelligence. Some studies found higher college entrance exam scores for those who were lower measures of religiosity, while others found no relationship between the two. The extreme range of these studies’ measures, variables of interest, subjects, and publication dates makes synthesis of the literature difficult. Well-controlled, modern studies that use reliable and valid measures of both intelligence and various aspects of religiosity have shown either no  relationship between the two or a very small relationship. More research on this subject is sorely needed with various populations in order to sort out potential mediating variables.

Dr Lack’s work is a crucial overview of a subject which is all ot easy to cherry-pick. Psychological research is all too often dogged by methodological issues or aspects which need to be taken into account, and this is what Caleb has sought to do.

And then to the fifth post, in which he says:

To those who would disagree with my assertion that innate intelligence does not differ between the religious and non-religious, I would pose a thought experiment:

Someone is born into a religious family, and then later deconverts and becomes a non-theist. At what point did their intelligence increase? Was it with their deconversion? Did he/she became an atheist and get smarter? Did he/she get smarter suddenly, which then caused the deconversion?

Obviously, this is a ludicrous question. It is especially odd given that we know people’s IQ scores are relatively stable from age five to adulthood (at least on standardized intelligence tests). Something else must be driving any noted intelligence differences. While I think that it is education, there are other variables in some of the reviewed studies (the personality factor of openness, for example) that must also be account for in any model. My upcoming research project will examine a host of demographic, religious, cognitive, and personality variables to find out which (alone or in combination) are most predictive of intelligence. You’ll find the results out here first…in about a year or so.

You can see more here: 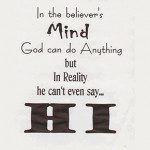 April 14, 2016 Religious Belief is a Virus
Recent Comments
0 | Leave a Comment
"There is no evidence of suppression in those elections. You didn't provide any. There is ..."
Barry Trumpian Conspiracy Theories Fuelling Insane Republican ..."
"Two acquittals by fellow Republicans who knew he was guilty."
Raging Bee Humanists Launch Project to Uplift Marginalized ..."
"Somehow it didn't get registered with Disqus:https://disqus.com/home/forum/tipplingphilosopher/"
Luke Breuer Genuinely Good News for Fans of ..."
"So you're denying that voter suppression had, and continues to have, a real effect? Instant ..."
Raging Bee Trumpian Conspiracy Theories Fuelling Insane Republican ..."
Browse Our Archives
get the latest from
A Tippling Philosopher
Sign up for our newsletter
POPULAR AT PATHEOS Nonreligious
1

Nonreligious
Are God-Shaped Holes Filled Or Washed Away (Or...
A Tippling Philosopher