Some three thousand people have quit the Church of Denmark recently after a campaign by the Atheist Society. Christian Today explains:

Nearly 3,000 baptised cancelled their membership last month after Denmark’s Atheist Society, Ateistisk Selskab, launched a nationwide campaign advising people they could save money by opting out.

The Evangelical Lutheran Church of Denmark is among several Churches in Europe subsidised by a Church tax. Although the tax is voluntary in Denmark, at a rate of around one per cent, Church members are automatically signed up and have to opt out rather than opt in.

Nearly eight in 10 Danish people are members of the Church of Denmark, known as “the People’s Church”. The Church is both Protestant and episcopally-led. Everyone who is baptised automatically becomes a member. Just 2.4 per cent of members attend every week….

Atheist Society spokesman Anders Stjernholm told Kristeligt Dagblad: “We are very pleased with the preliminary results. While our bus campaign calls for a broad debate about the foundations of faith, the withdrawal campaign targets the many Danes who have long considered leaving folkekirken, but have been putting it off because the process is too cumbersome.”

The members of national Church of Denmark pay a church tax, which varies between municipalities, but can be as large as 1.51%. The tax is generally in the vicinity of 1% of the taxable income. The tax doesn’t cover the entire budget of the church. An additional 13% is paid by the government. This means even people who are not members of the church finance the church through taxes.

I find this absolutely stunning that a church can exact that much money, irrespective of belief, out of citizens. 1.5% is a sizeable amount of money for the average wage. I cannot believe that, in this day and age in Western Europe, such a thing is taking place. 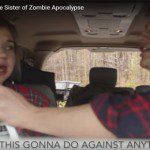 April 14, 2016
This Is Brilliant: Maybe the Zombie Apocalypse Isn't Unreasonable!
Next Post 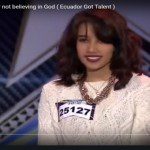 April 15, 2016 Ecuador Talent Show Shockingly Lectures Contestant on her Atheism, Gets Sacked
Recent Comments
0 | Leave a Comment
Browse Our Archives
get the latest from
A Tippling Philosopher
Sign up for our newsletter
POPULAR AT PATHEOS Nonreligious
1