Given that I have a forthcoming book about the Kalam Cosmological Argument due out in the near future, I thought I would resurrect some old ones on the KCA. Here is one from a few years back looking at the mutually exclusive natures of the KCA and libertarian free will:

I was posting on Randal Rauser’s blog recently [ages ago] and made a throwaway comment about the Kalam Cosmological Argument (KCA) and libertarian free will (Rauser posted about it here and here). It is an argument which I have meant to spell out for some time and so I guess this is as good a time as any.

So let me remind you of the KCA.

Everything which begins to exist has a cause for its existence

The universe began to exist

Therefore the universe had a cause (for its existence)

Essentially, this argument implies by assertion that you cannot have ex nihilo creation – that an event cannot be created out of nothing. Only God, it supposes, can do this. And thus the universe, created out of nothing (arguably) was created ex nihilo by God. The causal chain goes back to the Big Bang and stops. How can this be explained? Well, since causality must continue regressing backwards, if there is a beginning to causality, it can ONLY be explained by God.

However, the theist is usually, if not a Calvinist, an adherent to the notion of libertarian free will (LFW). By this, I mean that they believe an agent could make free choices – could have done otherwise. This implies that the agent is the originator of a freely willed decision, or the causal chain in a decision. The determinist, on the other hand, believes that every effect has a cause and that that cause is itself an effect or a prior cause and this goes back to the Big Bang or similar starting point where physics breaks down, or some other such situation (Loop Quantum Cosmological loop or suchlike).

The point is that the denier of LFW claims that the agent is themselves part of a larger causal chain which explains why the agent did what they did; that the reasons were derived from what is known as the causal circumstance – the snapshot of the universe at that prior moment to the event.

Back to the theist. So they generally believe that the causal chain starts with the agent; that they originate the causal chain. This allows them ownership over the decision so that the reason for the decision cannot be further deferred to other causes. But this means that the agent is creating something out of nothing. There is ex nihilo creation, since no prior reason can be given to explain the agent’s decision, otherwise we return to determinism.

But allowing for ex nihilo creation defies the opening premise of the KCA. William Lane Craig is always espousing the intuitive ‘truth’ of the metaphysical claim that ex nihilo nihil fit – out of nothing, nothing is made. But the theist is pretty much always an adherent of the KCA AND LFW!

The theist seems to use one of two defences here:

2) That the agent is itself a cause – and that is fine. For example, there is the theory of agent causation supposing that agents are different to events and event causation. People can somehow ground causal chains and decisions in a way which is different to, say, a boulder rolling down a hill, hitting a tree and a pine-cone falling out. That kind of causality has no agency.

1) can easily be answered as I have done here.

2) is a non-starter, as far as I am concerned. Agent causation is a theory developed by people like Roderick Chisholm half a century ago. I am not that sure that many people adhere to it these days. It seems there is no good reason for asserting that agents are causally different to standard events. One can appeal to some kind of dualism, but causality is metaphysical as a concept, and dualistic substances need adhere to it in the same way matter does, too. To merely suppose an agent can be sufficient explanation for the cause of a decision is particularly question-begging. Without causal reasons, a decision grounded in no reason other than ‘the agent’ is synonymous with random. Brain events, genetics and biology, we know, cause agents to make the decisions they do. Mixed with the environment, and you have a causal circumstance and determinism.

We know, for example, that in the Benjamin Libet style experiments (where we can observe that the brain kicks into gear before the conscious brain ‘decides’ to press a button) we can actually ask the subject to press a left or right button and send trans-cortical stimulation (magnetic stimulation) in to the brain and make the agent either choose left or right, depending on where we send it. The agent then assigns their own agency to that afterwards claiming that they freely chose left or right.

Which means that the adherent to the KCA cannot consistently and coherently be an adherent of libertarian free will. Theists, then, are not logically consistent.

This problem is known as the Dilemma of Determinism and requires something a little special if the theist wants to bypass issues raised by the KCA in order to solve it.

May 18, 2016 Meaning & Purpose Concerning Animals, Including Humans
Recent Comments
0 | Leave a Comment
Browse Our Archives
get the latest from
Nonreligious
Sign up for our newsletter
POPULAR AT PATHEOS Nonreligious
1 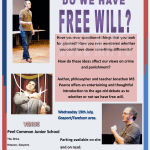 Nonreligious
Debating Free Will with Verbose Stoic
A Tippling Philosopher

Nonreligious
Why Is There Something Rather Than Nothing?
A Tippling Philosopher
TRENDING AT PATHEOS Nonreligious