[Here is an old one from Andy Schueler, reposted for the new readership. I wonder if he has finished the book now! – Andy?-JP]

You’ve all heard the standard lies about the third reich being an “Atheist regime” and Darwinian evolution being a foundation for the Nazi race ideology. The funny (“funny” in a tragic way) thing about this is, that these claims are not only wrong, but that the exact opposite happens to be true. You might have heard that Darwin’s (and Haeckel’s) books were not only not appreciated by the Nazis, but even made it on the index of forbidden books – yes, the Nazis burned copies of the Origin of Species.

But what should be even more surprising (to the Christians that, knowingly or unknowingly, propagate these lies), is that the Nazi race ideology was 100% creationist. They did believe that Humans were created by the christian God (although some prominent Nazis, like Heinrich Himmler, had non-Christian conceptions of God and were heavily influenced by germanic paganism). The difference to modern creationists was only, that they did not believe in an original couple Adam & Eve, but rather in the separate creation of different races – with the Aryan race being the only one that was created in the image of God. And that is the whole basis for the Nazi race ideology – “mixing” with the “lesser races” weakens the bloodline and goes against God´s will.

Here is an excellent blogpost that explains this in much more detail:

The conclusion to this excellent article follows:

Thus nothing in Nazi ideology derives from Darwinism. The few aspects in common were pre-Darwinian; the ideas that originated with Darwin were anathema to and rejected by the Nazis. The widespread blaming of Darwinism as an inspiration for Nazi crimes has no support in historical evidence and instead derives purely from a desire on the part of the religious to smear Darwinism.

The labelling of the Nazis as “atheistic” is similarly motivated and is also the exact opposite of what the evidence says. The Nazi ideology was theistic and religious and an offshoot of Christianity, merging Christianity with Nazi racial theory. It is true that the Nazified Christianity was opposed to more mainstream Christian views, and thus that the Nazis wanted radical reform of the Christian religion, but in no sense was it “atheistic”.

When presented with evidence such as documented above, showing the religious nature of Nazi ideology and their strong opposition

to atheism, many Christians resort to arguing that these public statements were merely a facade to appeal to the public, and were deliberately hiding an underlying “atheism”. However, at no point do they present actual evidence for this claim, and Hitler was too much of a megalomaniac and placed too high an importance on his ideas to have hidden them away. Further, resorting to a claim that the Nazis hid their “atheism” is self defeating — it is an admission that the populace they were appealing to (the people who actually carried out the Holocaust) were overwhelmingly Christian, as indeed recorded as more than 95% Christian in a 1939 census.

Fifty thousand Germans were involved in the Holocaust, and another fifty thousand were close enough to it to have known what was happening, and these people were overwhelmingly Christian. You can’t tell a secret to 100,000 people, and thus their willingness to kill Jews was based on the public Nazi ideology, the religious, creationist and Christian ideology presented in Mein Kampf.

It is the unpalatability of that truth that leads Christians today to the Holocaust revisionism of trying to pass the blame, instead trying to blame what they least like, namely atheism and Darwinism — ideas which, with true irony, the Nazis disliked just as much as they do.

I’m currently reading Richard Weikart´s “From Darwin to Hitler”, it’s even worse than I imagined… When I’m done with that, I’ll write a longer post about it. 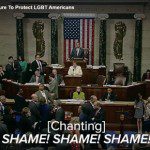 May 22, 2016
House Erupts as GOP Blocks Measure To Protect LGBT Americans
Next Post

May 24, 2016 Study Shows People of No Religion Outnumber Christians in England and Wales
Recent Comments
0 | Leave a Comment
""Some evolutionary psychologists disagree . . . "No, they don't disagree. Read my comment again."
Chuck Johnson The Dependence of Biblical Law Codes ..."
"The healthcare system is run by the central government, not the other way around."
democommiescrazierbrother Talking with my taxi driver – ..."
"You can't separate the general availability of healthcare from the system that provides it. And ..."
im-skeptical Talking with my taxi driver – ..."
"My friends ephew works for moderna. He told me that they have been working on ..."
BensNewLogin Talking with my taxi driver – ..."
Browse Our Archives
get the latest from
A Tippling Philosopher
Sign up for our newsletter
POPULAR AT PATHEOS Nonreligious
1

Nonreligious
Who Is Jesus and What Is Christianity Without...
A Tippling Philosopher

Nonreligious
Who Is Jesus and What Is Christianity Without...
A Tippling Philosopher

Nonreligious
"Evangelicalism is One of the Most Hated Religious...
A Tippling Philosopher
TRENDING AT PATHEOS Nonreligious