Why don’t all animals photosynthesise? (the Problem of Evil revisited)

This is an old favourite of mine which has appeared in a couple of books: the ebook The Problem with “God”: Classical Theism Under the Spotlight and The Little Book of Unholy Questions (now with a new cover).

This is a video I did some time ago which I think sums up the Problem of Evil in one fell swoop. The question sidesteps free will theodicies, especially as it applies to the rest of the animal world. See what you think.

Excuse the shameless plug at the beginning, and the bastardised use of begging the question!

The follow on question, asked in that book, is why it was deemed necessary to design a system whereby animals need energy at all. There is a much wider debate vis-a-vis energy in this here universe.

It is better because it talks about evil as being gratuitous or not. The evil in the world can still logically exist, as long as it is not gratuitous (i.e. serves a purpose). With regards to the question about photosynthesis, the idea is that eating meat and causing animal pain and death must be necessary for some other, greater good.

The Christian is in the position of being able to say, as they always do, that this is logically possible. This, however, is not good enough. It falls into the fallacy of what Richard Carrier calls possibiliter ergo probabiliter. In other words, something is possible, and so therefore it becomes probable. This is not, for me at any rate, an epistemologically good method. If I went through my life believing things because they were possible and not probable, I would get into some serious trouble.

The Christian would no doubt claim that the rest of the evidence for God means that the evidence for it not being gratuitous is good and makes the conclusion that there is a greater good probable. Again, this is not good enough for me. And if this is the case, then God could surely communicate that there is a greater good, not least what that greater good is. Many Christians argue that we cannot know the mind of God and we might not understand what the greater good might be. I think this is vastly underrating human understanding and is effectively laughable.

In sum, the fact that a vast number of animals eat other animals in order to survive, meaning that there is an incredible amount  of pain and suffering on earth just so that animals can merely survive, raises some really difficult questions for the theist, and ones which are only ever answered with get-out-of-jail free cards employing the omniscience escape clause. And I just don’t think that’s good enough.

I asked this question to William Lane Craig at the Stephen Law debate in London after their debate a few years ago. He had no answer, though declared it was a great question. There you go. 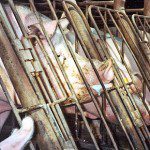 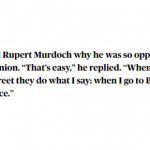 June 9, 2016 The Bias and Downright Lies of the UK Media over EU Referendum
Recent Comments
0 | Leave a Comment
"LOL Sure little angry dude go with that So i guess there really is nothing ..."
Christ Soldier Kenneth Copeland Showing He Is Insane
"Snowflake crybaby is running away again and will probably block me because I humiliated your ..."
DeadBabyJoke😷 Kenneth Copeland Showing He Is Insane
"So you have deep seated insecurites and you think everyone dislikes you...On what are you ..."
Luke Breuer Coronavirus Is a “Partisan Pandemic”
"No one is forbidding your Muslim neighbours from speaking their own languages, practising their culture ..."
AtticusOSullivan Volunteers at New York CV Hospital ..."
Browse Our Archives
Follow Us!

9 Out Of 10 Aren't Sure Why They're...
A recent study reveals the vast majority of people who are attacking...
view all Nonreligious blogs
What Are Your Thoughts?leave a comment
Copyright 2008-2020, Patheos. All rights reserved.