From the British Humanist Association:

The Department for Education (DfE) has been forced to amend its education green paper by the UK Statistics Authority, following a complaint made by the British Humanist Association (BHA) over the ‘misleading’ figures it presents on the impact of religious selection at ‘faith’ schools.

The Government is currently consulting on proposals set out in Schools that work for everyone which, among other things, proposes to remove the current requirement that English religious schools leave at least half of their places open to all local children, irrespective of religion or belief.

One of the primary justifications for removing this so-called 50% cap on religious selection is that it has not been successful in boosting integration in religious free schools. However, the BHA complained that the figures presented in the green paper both masked the effectiveness of the cap and overstated the level of ethnic diversity in Catholic state schools, prompting the UK Statistics Authority to order the DfE to amend the consultation document.

Clarification of the figures comes just three days before the consultation closes, and in fact still fails to accurately reflect the impact of the 50% cap and the success it has achieved in boosting integration in the majority of religious free schools. The BHA will be further taking this up with the UK Statistics Authority.

Contrary to claims made in the green paper, analysis conducted by the BHA found that ethnic integration in schools has improved significantly as a result of the 50% cap being in place. Drawing on the same underlying data used by the Government, the figures show that at ‘other Christian’ free schools subject to the cap, nearly a fifth (19%) of pupils are Asian, while at ‘other Christian’ schools that are fully religiously selective, just 3% of pupils are from Asian backgrounds. A similar situation is seen in Church of England schools, where those subject to the cap admit 15% of pupils from Asian backgrounds, while those that are fully religiously selective admit only 6% of their pupils from Asian backgrounds. The DfE has failed to offer this comparison, which demonstrates that thousands of non-white pupils have gained access to their local schools where they haven’t had access before.

BHA Education Campaigner Jay Harman commented, ‘We’re glad the UK Statistics Authority has taken action on what was a clear attempt by the Government to massage the figures in a way that misleadingly presents the 50% cap as a failure. The idea that allowing schools to admit children from only one particular religion is in any way compatible with promoting integration was counter-intuitive to begin with, and it should come as a surprise to no-one that the figures demonstrate this.’

Read the BHA’s letter to the UK Statistics Authority:

Read the BHA’s briefing on the impact of the cap on promoting integration in free schools:

Read the Government’s green paper, where it sets out the proposals:

Read more about the BHA’s work on ‘faith’ schools: 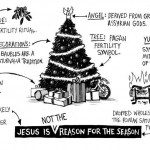 December 21, 2016 Debunking the Nativity - Quirinius vs Herod and the Ten Year Gap
Recent Comments
0 | Leave a Comment
Browse Our Archives
get the latest from
A Tippling Philosopher
Sign up for our newsletter
POPULAR AT PATHEOS Nonreligious
1

Three die as Muslims in India riot over...
A LOCAL politician in Bangalore  – Akhanda Srinivas Murthy, inset above –...
view all Nonreligious blogs
What Are Your Thoughts?leave a comment
Copyright 2008-2020, Patheos. All rights reserved.