America Is the Greatest! Pt 1: Standard of Living.

Over on another post, there are some raging threads about a number of topics from gun crime to how great America is. It is on this last topic that I want to dwell.

When I was at uni in the ’90s, I knew an American student who was over for a year. Nice guy, but he has that intuitive, psychological belief that so many of us do. Let me explain. One day, in the bar, we got to discussing the US, its foreign policies, and its place in the world. We were at the birth of the internet, where print press was wide and varied, and information was starting to get properly disseminated on a greater scale. We, the Brits in the uni bar, were skeptical of the greatness of the US, and were giving this guy a difficult time. He got more and more defensive until, finally, he declared what you could tell he really believed: “America is the greatest country at everything in the world!” He truly properly believed it.

It is, in fact, a common theme. Americans, seemingly, more often sing the ultimate praises of their own country than, say, Brits. We are a bitter, twisted, self-deprecating lot, who love a good moan. Pessimism, though, can lead to a jolt of realism. Unending optimism, on the other hand, can lead to self-delusion.

On this other thread, were some of the following claims:

Standard of living, opportunity, freedom, vitality, diversity… I don’t think any other country even comes close…. I think the U.S. easily surpasses Canada in all of them. The idea that Canada outperforms the U.S. on opportunity or diversity, for example, seems to me absurd.[source]

Japan is way higher in terms of standard of living and vitality (if you mean ‘health’ than the USA.

I think even that big difference understates the true difference in standard of living. For virtually all major classes of products and services (housing, food, transportation, entertainment, education, health care, etc.), the quality, quantity and variety seems to be substantially higher in the U.S. than in Japan.

‘Freedom’ is what you make of it, I guess.

Most Americans I met weren’t as free as I was.

If you live in another country, you probably have significantly less freedom. [Source]

This can be a tough thing to measure. Just looking at GDP per capita can be very misleading, because averages hide massive inequalities. The Us is a country of extremes, where the gap between rich and poor is so massive that it causes problems. I have written on income inequality here before, as well as here, concerning free market capitalism. When you say it is a country of the best standard of living, what you are really saying is that the richest in the country, disproportionately represented, have the bet standard of living. The super-rich raise the average such that it skews the data. Furthermore, it is probably better to look at median household income:

In 2014, this placed the US in 19th place in the world. 19th. Not the best, particularly important if you take this as the best method to assess standard of living.

The United States has one of the widest rich-poor gaps of any high-income nation today, and that gap continues to grow.[51] Some prominent economists have warned that the widening rich-poor gap in the U.S. population is a problem that could undermine and destabilize the country’s economy and standard of living. In 2006, Alan Greenspan wrote that “The income gap between the rich and the rest of the US population has become so wide, and is growing so fast, that it might eventually threaten the stability of democratic capitalism itself”.[52] In 2013, George Friedman, the head of Stratfor, wrote that the middle class’ standard of living was declining, and that “If we move to a system where half of the country is either stagnant or losing ground while the other half is surging, the social fabric of the United States is at risk, and with it the massive global power the United States has accumulated.”[53]

Indeed, this can go a long way to explaining the pull of Trump in those depressed, rust belt areas. The irony is, though, that he, and the Republicans, are the last people who will be fighting to reverse that trend.

But GDP is not really the best, most holistic way to measure standard of living (for a start, it doesn’t factor in how much things cost – you can earn lots, but if things are cheaper elsewhere, then not knowing the context is less than ideal). Wiki, again, states on different measures:

In 2013, the Economist Intelligence Unit’s Where-to-be-born Index, which takes into account material well-being as measured by GDP per capita, life expectancy, political stability, the quality of family life based on divorce rates, community life, crime and terrorism rates, gender equality, the quality of governance, climate, and unemployment rates, ranked the United States at 16th place, tied with Germany.[5]

The OECD Better Life Index, which measures quality of life according to 11 factors, ranks the United States as 7th among 34 OECD countries.

The homeownership rate is relatively high compared to other post-industrial nations. In 2005, 69% of Americans resided in their own homes, roughly the same percentage as in the United Kingdom, Belgium, Israel and Canada.[6][7][8] In 2007, Americans enjoyed more cars and radios per capita than any other nation[9] and more televisions and personal computers per capita than any other nation with more than 200 million people.[10][11]

So Americans seem to have the most stuff. But again, this is per capita, and doesn’t take into account inequalities – do people at the “top” have a disproportionate amount of stuff? The Where-to-be-born Index seems to me to be one of the best, holistic measures. In 2013, it had the US in 16th and Canada in 9th. 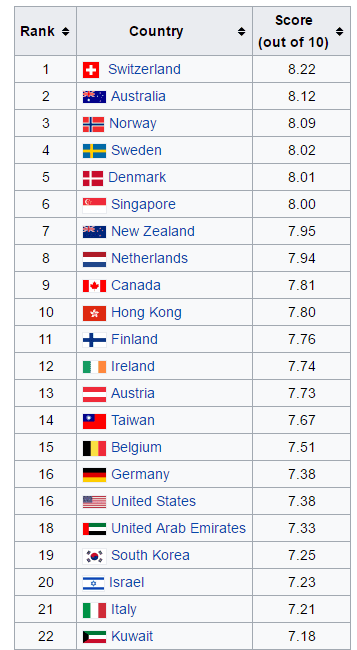 It seems, on those standards (GDP per capita, life expectancy, political stability, the quality of family life based on divorce rates, community life, crime and terrorism rates, gender equality, the quality of governance, climate, and unemployment rates) the US is a long way behind where the above commenter thinks it is.

End result is, I think that commenter above has deluded himself.

And yes, before you mention it, Britain is probably lower on most scales. It won’t get better with our present government, that’s for sure. We can only hope, for purely ranking reasons, that Trump will send the US south in rankings.

[Next time, I will look at freedom and opportunity.] 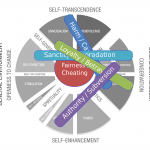 January 13, 2017 Haidt’s Five Flavours as defined by Schwartz Values
Recent Comments
0 | Leave a Comment
Browse Our Archives
get the latest from
A Tippling Philosopher
Sign up for our newsletter
POPULAR AT PATHEOS Nonreligious
1

The Two Factions Forming in the...
Roll to Disbelieve
Books by This Author Books by Jonathan M. S. Pearce