It’s such a ubiquitous claim, and it winds me up because it is so naive. It looks something like this, as made by the endlessly facepalming See Noevo on this thread:

Granted, the opportunity for big profits in teaching evolution is not as great as with, say, the cabal on Anthropogenic Climate Change “science”. But you can still make a comfortable living in evolution story-telling. Provided, of course, that you abide by the story-telling Darwinian dogma of the disciples who control the hiring of teachers, writers, researchers. (Otherwise, you may pursue story-telling in English, not Evolution, departments.)

But as with ACC “science”, you also “profit” from pushing the ideas of modern liberalism.

Wow, he admits, graciously, that pro-evolution scientists are in a conspiracy, but they’re not in it for the money. Not like those pesky climate scientists! Those money-grabbing hacks!

Except, that is complete and utter nonsense. What annoys me about this stupid claim is that the antithesis is true. It is not the climate scientists who are in some financial, conspiratorial cabal, it is the denialists. Let’s look at some of the organisations who fund “science” against AGW (anthropogenic global warming – the idea that climate change is at least in some large part man-made). A study in 2013 by Drexel University found out the scale of conservative-backed denialism:

Deniers who claim the scientists’ conspiracy will probably exhibit some massive cognitive dissonance on reading this, but See Noevo’s remarkable claims are quite silly in light of the fact that these scientific organisations, who struggle for the sort of funding he must be imagining, are pitted against some of the biggest corporations and corporate organisations in the world. It is almost funny that he is claiming such, if it wasn’t so dangerous. And what lurks behind these organisations, other than the ubiquitous Kochs and ExxonMobil, is the DonorsTrust –  known as the “dark money ATM of the conservative movement” for its ability to take in funds from anonymous donors and distribute them to recipient organisations, such as the ones you see below. Now that sounds conspiratorial!

And at this very moment, with the Trump administration incoming, with the arrival of most right-wing dominated cabinet full of the most million and billionaires in American political history, See Noevo (and all the other similar thinkers) position is even more untenable. Here are a few organisations that the scientists are up against:

ExxonMobil: Investigations have shown that the company’s scientists have known about challenges to the climate since the 1980s but their positioning on the matter has not reflected this. They routinely fund organisations (such as the AEI) who undermine climate science, as well as being a major player in ALEC, the corporate lobbying group and best friend of the Republicans. They fund organisations such as the AEI, National Black Chamber of Commerce, ALEC and the Federalist Society. Details can be found here, from where this is taken:

At its most recent AGM, the oil and gas giant faced a barrage of questions and resolutions over its position on climate change. Then there is the not insignificant matter of investigations by a group of attorneys general that allege the company lied about its knowledge of the risks of burning fossil fuels….

But the latest disclosures on donations by ExxonMobil, reported publicly here for the first time, show it continues to support organisations that claim greenhouse gases are not causing climate change, or that cuts to emissions are a waste of time and money.

Organisations including the American Enterprise Institute, the American Legislative Exchange Council and the National Black Chamber of Commerce — all organisations with a record of misinformation on climate science — all received grants in 2015 from ExxonMobil. The 2015 tally brings the total amount of known Exxon funding to denial groups north of $33 million since 1998.

Since 1997, ExxonMobil has been releasing reports annually listing donations to public policy groups — several of which were engaged in a public misinformation campaign on climate change science.

American Enterprise Institute: These guys received funding from some of the above ($3,615,000 from ExxonMobil from 1998-2012, and more than $1 million in funding from Koch foundations from 2004-2011.). As the Union of Concerned Scientists states:

For years, AEI played a role in propagating misinformation about a manufactured controversy over emails stolen from climate scientists [2], with one AEI research fellow even claiming, “There was no consensus about the extent and causes of global warming.” [3] A resident scholar at AEI went so far as to state that the profession of climate scientist “threatens to overtake all” on the list of “most distrusted occupations.”

The Heartland Institute: This is another dubious right-wing political group. The Union for Concerned Scientists state:

While claiming to stand up for “sound science,” the Heartland Institute has routinely spread misinformation about climate science, including deliberate attacks on climate scientists. [37]

Popular outcry forced the Heartland Institute to pull down a controversial billboard that compared supporters of global warming facts to Unabomber Ted Kaczynski [38], bringing an early end to a planned campaign first announced in an essay by Heartland President Joseph Bast, which claimed “… the most prominent advocates of global warming aren’t scientists. They are murderers, tyrants, and madmen.” [39]

Heartland even once marked Earth Day by mailing out 100,000 free copies of a book claiming that “climate science has been corrupted” [40] – despite acknowledging that “…all major scientific organizations of the world have taken the official position that humankind is causing global warming.”

Americans for Prosperity: The supposedly grassroots organisation, AFP, misinforms the general public by holding low-price gasoline events, getting customers details and sending them all sorts of dubious literature. “Supposedly” because:

AFP has its origins in a group founded in 1984 by fossil fuel billionaires Charles and David Koch [9], and the latter Koch still serves on AFP Foundation’s board of directors [10]. Richard Fink, executive vice president of Koch Industries, also serves as a director for both AFP and AFP Foundation. [11]

ALEC purports to “support the use of sound science to guide policy,” but routinely provides a one-sided platform for climate contrarians. State legislators attending one ALEC meeting were offered a workshop touting a report by a fossil fuel-funded group that declared “like love, carbon dioxide’s many splendors are seemingly endless.” [14, 15] Another ALEC meeting featured a Fox News contributor who has claimed on the air that carbon dioxide “literally cannot cause global warming.” [16, 17]

Koch Industries: The Koch Brothers have sent at least $88,810,770 directly to 80 groups denying climate change science since 1997. They funded the “grassroots” Tea Party movement and are responsible for what some cynics see as a corporate takeover of the US government. Greenpeace have sought  to publicise the Kochs work in this area. For more information, watch this video:

The coal company also gave to political organisations, funding twice as many Republican groups as Democratic ones.

Peabody, the world’s biggest private sector publicly traded coal company, was long known as an outlier even among fossil fuel companies for its public rejection of climate science and action. But its funding of climate denial groups was only exposed in disclosures after the coal titan was forced to seek bankruptcy protection in April, under competition from cheap natural gas.

Environmental campaigners said they had not known for certain that the company was funding an array of climate denial groups – and that the breadth of that funding took them by surprise.

Cato Institute: Founded by, guess who…? One of the Koch brothers. The Cato Institute is a libertarian think tank based in Washington, D.C. According to their own website, the Cato Institute can be seen in this way: “The mission of the Cato Institute is to originate, disseminate, and increase understanding of public policies based on the principles of individual liberty, limited government, free markets, and peace. Our vision is to create free, open, and civil societies founded on libertarian principles.” They have received funding from ExxonMobil and the Kochs, and pass on funding to other groups. As DeSmogBlog states:

Other notable funders include Scaife Family Foundations, and the secretive DonorsTrust, a group that has been described as the “Dark Money ATM of the conservative movement.”…

Competitive Enterprise Institute: Although inconsistent in its approach to global warming, it has received large funding from, amongst others, ExxonMobil and the Kochs. It is yet another free market, libertarian organisation. DeSmogBlog states:

Myron Ebell, chairman of the Cooler Heads Coalition and an outspoken man-made climate change denier, serves asDirector of the CEI‘s Center for Energy and Environment. In March 2010, the Financial Times called Ebell “one of America’s most prominent climate-change skeptics.” [36], [38]

According to the CEI‘s website, “CEI‘s largest program takes on all the hard energy and climate issues. CEI questions global warming alarmism, makes the case for access to affordable energy, and opposes energy-rationing policies, including the Kyoto Protocol, cap-and-trade legislation, and EPA regulation of greenhouse gas emissions. CEI also opposes all government mandates and subsidies for conventional and alternative energy technologies.” [3]

Their own latest position on climate change is:

While maintaining that “Science should be used as one tool to guide climate policy,” the Heritage Foundation often uses rhetoric such as “far from settled” to sow doubt about climate science. [44, 45, 46, 47] One Heritage report even claimed that “The only consensus over the threat of climate change that seems to exist these days is that there is no consensus.” [48]

Vocal climate contrarians, meanwhile, are described as “the world’s best scientists when it comes to the climate change study” in the words of one Heritage policy analyst. [49]

Here are some others, in case that wasn’t scary enough:

And there are many more. Check this graphic out: 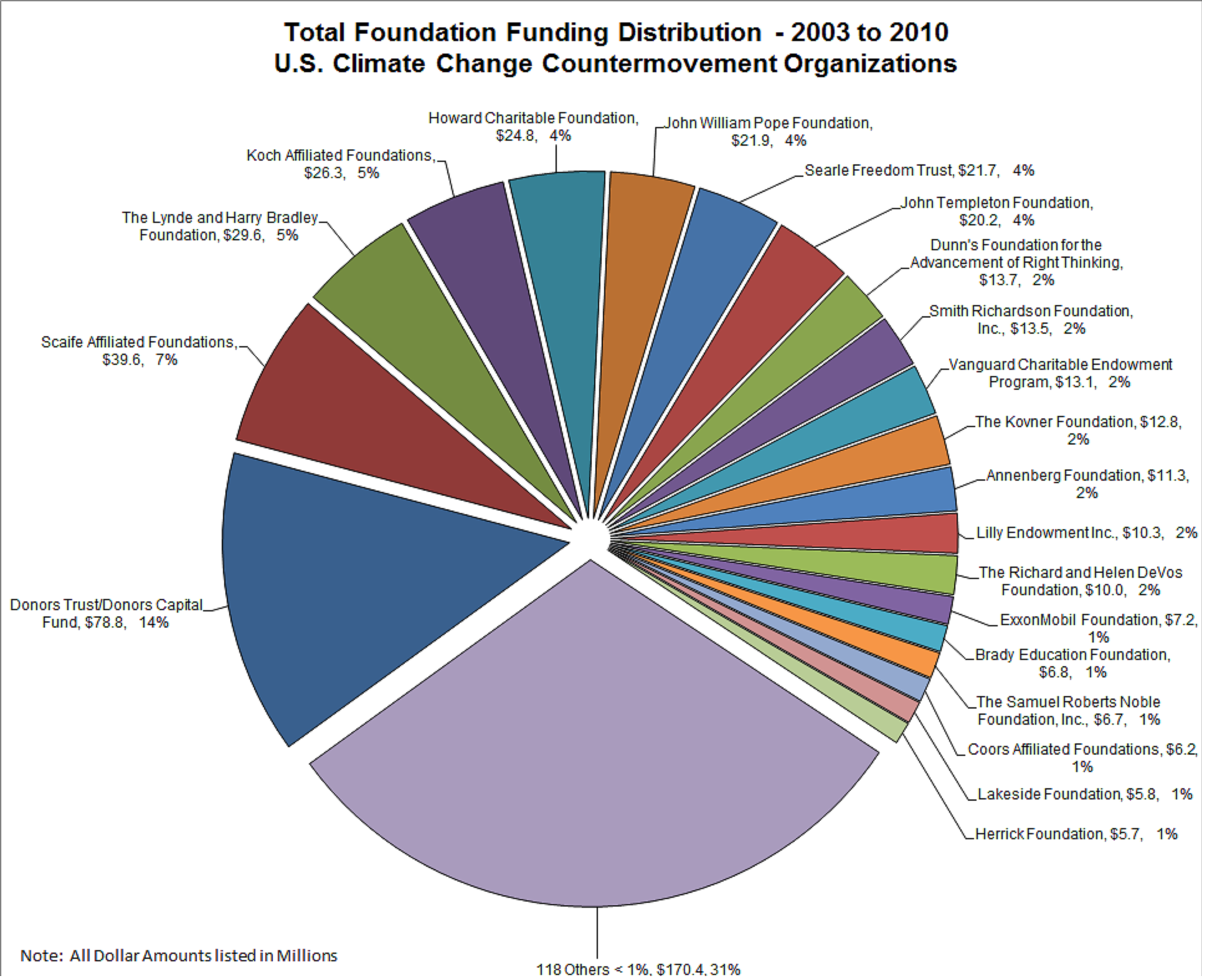 Anyone who supports the idea that scientists and governments have some kind of global, financial conspiracy to promote AGW is a total numpty of the highest order engaging in some of the silliest of thinking known to modern humankind. 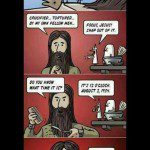 January 19, 2017 I Couldn't Resist...
Recent Comments
0 | Leave a Comment
"Miss Eassa, exactly! The problem is democracy, which has always been a scourge on humanity. ..."
Dunnyveg Why Do We Create Myths?
"I guess Summers said that to a lot of people, because a virtually identical exchange ..."
Andrew G. Pinker, Political Ideology, and Reason
"Recognising that we each of us suffer from these biases to a greater or lesser ..."
Geoff Benson Heads I Win, Tails You Lose
"So true! obama's 3rd term is pushing the nation at an incredibly rapid speed toward ..."
eassa Why Do We Create Myths?
Browse Our Archives
get the latest from
A Tippling Philosopher
Sign up for our newsletter
POPULAR AT PATHEOS Nonreligious
1 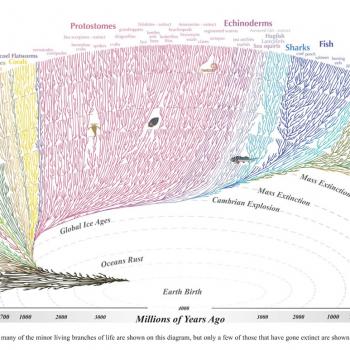 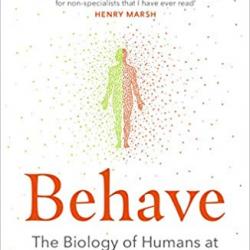 Nonreligious
Sapolsky and Carroll on Human Behaviour
A Tippling Philosopher 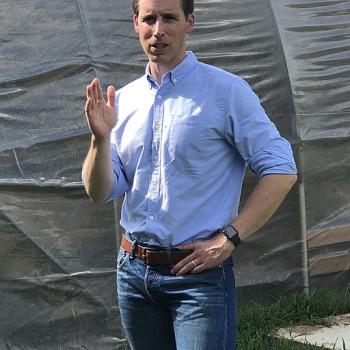