I have been accused on a few occasions of not understanding what I oppose when it comes to conservatives and their morality. This accusation often comes from individuals who don’t understand my position, tarring me with the ‘left’ or ‘liberal’ brushes, only occasionally using the word progressive, and even then generally just meaning, in effect, ‘liberal with pretentions.’

Let me put my hand up and say that, to some extent, there is some truth to the claim, and it is the driver behind my engaging in the research that will be necessary for this series. I spent a long time not engaging with politics – I think this is common amongst people who, when pushed, admit to being liberal or progressive. I think that this is behind the oft-noted ‘liberal apathy’ that causes so many election results to swing right when the population itself swings left (as such it would be more correct to call it leftist apathy, but that doesn’t roll as nicely off the tongue).

The simple fact is that almost every time I read a conservative political manifesto (and, contrary to the beliefs of my regular interlocutors, I often do), I agree with the sentiments or stated goals. What I almost invariably disagree with is the claims made about the underpinning morality, facts about the world, or the means by which the end is to be achieved. I have no doubt that conservatives experience broadly the same dis-ease when reading a liberal or progressive manifesto. Of course, as we exist in the same world, but value aspects of it differently, this is exactly what one would expect. So I will be researching a definition of conservatism and its core values, reporting back on what I find, and commenting on that from my point of view as a progressive (filthy liberal with pretentions). 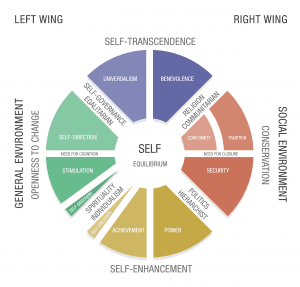 What I wanted to get to with this first post, as the motivation for this series, was an aspect of my model that seems to have escaped comment, despite being, I think, really very important. If we take my claim seriously, that moral epistemology relies on passing around the circumplex, from Stimulation through the Self-Enhancement, Conservation, and Self-Transcendence quadrants, to Self-Direction, then Conservatism, in some sense, sits between Liberalism and Progressivism. Whilst the output of Self-Direction does feed back into Stimulation, to call it continuous would be akin to suggesting that the Hegelian dialectic produces a synthesis that is merely a new thesis looking for a new antithesis; it might be true in some cases, but not all, and it is not even really the point.

Table 1: I think the point of progressivism is that it just is, the ‘neo’ prefix is meaningless…
but then I think it’s fairly meaningless in front of Liberal or Conservative, too.

When it comes to parenting, which, according to Lakoff is the basis of our views on politics, Conservatives often see Liberals as too permissive, and Liberals often see Conservatives as too authoritarian. However, the bulk of so-called liberal parenting is actually progressive parenting (and something that I would venture that most moderate conservatives engage in, too – see also my previous post on the values that parents seek to instill in their children).

Table 2: Of course not all Liberal parents are permissive, and not all Conservative parents are Authoritarian – the bulk of parents engage with some kind of authoritative parenting.

When one side critiques the other side’s politics (not their parenting), it nevertheless often devolves to permissiveness versus authoritarianism. The joys of emotional hyperbole!

I would also like to point out that The Independent Whig’s failure to recognise that Liberalism and Conservatism both have Individualist and Collectivist aspects arises from a broadly held misunderstanding of internalised beliefs and their relationship to external reality. (I can’t find The Independent Whig’s comment to a previous post of mine, just at the moment, but will post a link when (if) I rediscover it.)

This is why I think that the individualist-collectivist dichotomy is unhelpful.

In my model there is individualism and egalitarianism mostly on the left, and hierarchism and communitarianism (two different flavours of collectivism) mostly on the right. And even here, the discontinuity that I am speaking of is clear. Individuals eventually need hierarchies to manage interaction – contrary to what libertarians seem to want, but in line with the movement from liberalism to conservatism. Once the hierarchy is well understood the boundaries can be relaxed – in other words, you have to know the rules before you can break the rules. Finally, the rules of community become fully internalized, and the individual can act as a bearer of that community’s values, and apply them in a manner that is consistent with their own beliefs, and that this can be done on a case-for-case basis.

Table 3: A dialectic alternative to the Individualist/Collectivist dichotomy

The solution to the issue of false dichotomy could either be a dialectic, as shown in Table 3, or the Individualist-Hierarchist-Communitarian-Egalitarian progression in my model. Then again, my model is only intended to model in more detail the progression from dependence, via independence, to interdependence. There are Individualist-Hierarchists, those that like hierarchy because they happen to be high up in it; there are Hierarchist-Communitarians (two types of collectivism that underpin Conservatism – hierarchy being more political, and communitarianism being more religious); and Communitarian-Egalitarians, predominantly progressives and the more liberal denominations of Christianity (the various universalist denominations, and the lapsed or culturally Catholic). Note the discontinuity again – Egalitarian-Individualism doesn’t really make sense – because Egalitarianism (equal rights and equal opportunities) is both antithetical to, and reinforcing of, individualism (Schrödinger’s Individualist/Collectivist?).

The above is full of assumptions. I will support or overturn these assumptions in the coming posts, as I read more about what Conservatives (and others) think underpins conservatism, looking for an explicitly (probably American) Conservative equivalent to the Ten Commandments or the Five Pillars of Islam. If anyone has any preferred commentaries on this, then please link them in the comments. Indeed, finding conservative thought in non-American, and non-Western literature would be interesting. I have made observations about key differences between the GOP and Tories in the past, and doubtless will again.

I’m sure the above is enough to draw comment, but as posting infographics is so hip right now, here’s one on the differences between liberalism and conservatism (there are several points I disagree with, but for now I post it without further comment).

Figure 2: The Left/Right dichotomy, as typified by US politics
From David McCandless’ ‘The Visual Miscellaneum’ – US Link – UK Link

February 10, 2017
Check out these Videos on Skepticism
Next Post