Easter Doubt: On the Skepticism of the Resurrection

Easter Doubt: On the Skepticism of the Resurrection April 10, 2017 Jonathan MS Pearce

It’s that time again, so I am going to re-run my extensive series on the Resurrection and Easter. Sorry if you’ve read it before, but there’s nothing like a good reminder:

Christmas is over, time to get on to Easter. A Few years back, someone in Malawi had a debate on national TV with a Christian about the Resurrection accounts and I was asked to help provide some ideas for the debate, so here goes.

Let us look at the first aspect in this post, point 1).

The Gospels are not reliable. This much is true in at least a number of places (not least the Resurrection), but in the places where they could be reliable, we have no way of verifying or knowing they are.

Firstly, I have documented in my book The Nativity: A Critical Examination the plethora of contradictions and issues with just two of the Gospels, bizarrely the only two to mention the birth of Jesus.

We don’t know for sure, but can only guess:

What we do know is that they were written by people who already believed in Jesus as Messiah, were not eyewitnesses, were trying to evangelise and thus had open agendas and were not writing objective history, were writing 50-100 years after the death of the person they were writing about, and had no recognisable historical methodology which we can see in other contemporaneous historians.

Why is it more probable that your god exists than man made him up?

We have an exceptionally high prior probability that your god is false given that we both believe that every other god claimed to be true (before and after) is false. Thus, on prior probability, the JC God is HIGHLY unlikely to exist. How does the Christian overcome this? They have to provide high CONSEQUENT probability. ie Evidence. But this is poor. Let’s take the four Gospels, written by unknown people at unknown dates in unknown places with ex post facto agendas to evangelise, at least 40 years after the person they are writing about and whom they have never met, has died..

Let us analogise. I really get into David Koresh. I dig him. I come to believe NOW (actually, in another 20 years plus, to be accurate), whilst in another country, that David Koresh was the living Messiah. But, remember, I have no telephone or internet, car or public transport, to research this etc. Now, after being converted, coming to already claim that this guy is the Messiah, I THEN write a ‘history’ or account of this guy and his Messiahship. Remember, I have never met him, and there is no way of knowing (and it is unlikely, given my geography) whether have met any of his disciples. I call myself an evangelist, one whose job it is to convince other people using persuasive techniques, of the Messiahship of Koresh.

Not on your nelly, sunshine!

Taking just one little portion of the accounts: Matthew 27. Dead and resurrected Saints appear, parading around Jerusalem for many to see. Except no one else in the world apart from Matthew, writing int he context stated above, makes note of this. No Jew ever mentions what would have been, for them, the greatest thing ever seen.

Or take the idea that the nativity accounts (a point I bring up in my nativity book available from the sidebar) stake claims on the ‘facts’ of Jesus’ birth. They are pretty much the only cross-referencable claims in the NT. Matthew and Luke fail on every claim. They are empirically wrong. So given the basis that the first claims in two of the Gospels are empirically false, and these are the only ones which are verifiable, on what basis do we have the right to believe the rest of the Gospel claims, which are not verifiable? Wedding at Cana? Who was there? How do we know? etc. These are miracle claims which happen in rather unverifiable, nebulous contexts. And yet people are happy to drop the Nativity when it gets into difficulty and believe these nebulous claims?

Of the Gospel accounts, we should be thoroughly skeptical.

As far as the Resurrection goes, there are many contradictions.

As Bob Seidensticker states in his Cross Examined blog: 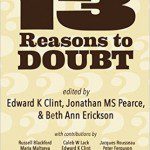 April 8, 2017
I am Editing a Patheos Nonreligious Book
Next Post

April 11, 2017 Easter Doubt: On the Skepticism of the Resurrection (part 2)
Recent Comments
0 | Leave a Comment
Browse Our Archives
get the latest from
A Tippling Philosopher
Sign up for our newsletter
POPULAR AT PATHEOS Nonreligious
1