A man originally arrested in 2014, after losing two appeals, has been sentenced to death for being, well, like you (probably) and me. As The Independent reports:

Several local media reports identified the man as Ahmad Al Shamri, in his 20s, from the town of Hafar al-Batin, who first came to the authorities’ attention in 2014 after allegedly uploading videos to social media in which he renounced Islam and the Prophet Mohammed.

He was arrested on charges of atheism and blasphemy and held in prison before being convicted by a local court and sentenced to death in February 2015.

At the time Mr Shamri’s defence entered an insanity plea, adding that his client was under the influence of drugs and alcohol at the time of making the videos.

He reportedly lost an Appeals Court case, and a Supreme Court ruled against him earlier this week.

While news stories in the last few years consistently identify Mr Shamri, his identity or sentencing has not been verified by the Saudi authorities.

In a country where atheists have been defined as “terrorists”, this is hardly surprising, though it is incredibly depressing. The dark ages are still with us in pockets around the world, most usually Islamic theocracies or despotic communist states.

What has been equally disconcerting has been the tweets that many supporters of the decision have produced. As “Faris” on Twitter has translated:

you (atheist) were created only to worship Allah. You are the one who chose this unfortunate ending to your life. #مرتد_حفرالباطن

what a silly time to live in, Sharia law was founded by Allah. who are you to discuss or object? #مرتد_حفرالباطن

He should have 3 days as a chance to come back to Islam, if not, just apply Sharia law. #مرتد_حفرالباطن

He gets 3 days to come back to Islam, if not, he shall be killed. Religion is not a game. He thought he found freedom. #مرتد_حفرالباطن

that’s good. Kill this atheist, others will be scared. #مرتد_حفرالباطن

apostasy’s punishment is known “death”. This is Islam, If you don’t accept this part, you’re not a true believer. #مرتد_حفرالباطن

Prophet Mohammed said(anyone who change his religion,kill him). This law is not from Muslims, it’s from God and his prophet. #مرتد_حفرالباطن

any Muslim who believes in Islam then change his mind,he’s corrupted and he shall be killed to scare him and protect others. #مرتد_حفرالباطن

The punishment of apostasy in Islam is death. No one can change Sharia law. #مرتد_حفرالباطن

We shall apply Sharia law on him to protect our society from Allah’s punishment. and to shut other atheists mouths. #مرتد_حفرالباطن

He should be killed cuz he declared war on Allah and religion, he wasn’t lowkey about it, he talked in public. #مرتد_حفرالباطن

I wish he’ll be executed, let’s make an example out of him. #مرتد_حفرالباطن

if someone criticized your family you’ll kill them, but when it comes to God criticizing, it’s freedom. (that logic tho) #مرتد_حفرالباطن

I demand to cut his head off in public. #مرتد_حفرالباطن

God willing, your head will fly. That’s what freedom brought to you. Also, wait for bigger punishment in the afterlife. #مرتد_حفرالباطن

He deserve to die. Please God, let me be Muslim forever. #مرتد_حفرالباطن

Quran and Hadith are the constitution of KSA. We all know the punishment of apostasy.We won’t disobey God to satisfy people. #مرتد_حفرالباطن

I thought copying these here was important to get a little flash of understanding of what the context of disbelief in Saudi Arabia must be like. The idea that to maintain integrity, Islamic society must kill dissenters – intellectual dissenters – is disturbing. The idea that I would say anything like “let me be an atheist forever” is intellectually bankrupt: despite what evidence might be thrown at me, I want to believe something out of emotional and intuitive pull. Desire over evidence. It’s the opposite of reasonable. Who are we to discuss or object to God’s will? Scaring others and protecting society by beheading those who use free speech and question? You thought freethought was freedom? (“He thought he found freedom” – I’m not sure how they can get away with the possible implication that there might be more freedom in Islamic belief, or, if not, that freedom is in some sense negative. Mind you, “Islam” means submission…)

It is what I call a memetic failsafe. Let’s pull on the idea of memes and memeplexes, ideas and networks of ideas that form belief systems. Ideas that provide some kind of benefit or have good survival mechanisms are more prone to surviving in our thoughts that those that don’t. There is no better memetic survival mechanism than heaven and hell. If you believe X, you will get the greatest reward known to man in human conception. If you do not believe X, you will get the greatest punishment known to human conception. And, to boot, we’ll kill you in this life here. Now that is pretty powerful stuff.

All of these tweets illustrate the memetic failsafe mechanisms that religion, and in this case Islam, can and do use to safeguard their continued existence. If you took away the threats, bribes and emotional and physical blackmail, Islam would have a level playing field with humanism and would undoubtedly lose. Add in all of these things, and humanism can’t compete. It’s just not on the same page.

As long as these mechanisms maintain, you will not see any dent in the numbers and nations adhering to Islamic doctrine and theocracy. Never before have we needed an Islamic reformation as much as now; and yet, given the provenance and nature of the sources (Qu’ran, Muhammad and Hadith), I can’t realistically ever see it happening.

For what it’s worth, I edited a book of deconversion accounts, some of which were from ex-Muslims (a beautiful account is written by a seventeen-year-old girl that is so well written).

Beyond An Absence of Faith: 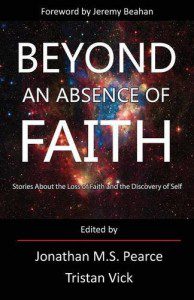 the Loss of Faith and the Discovery of Self
Previous Post

April 26, 2017
The Kalam Cosmological Argument and the Fallacy of Composition
Next Post

April 28, 2017 The Kalam: Uncaused Cause vs Ex Nihilo Creation
Recent Comments
0 | Leave a Comment
Browse Our Archives
Follow Us! 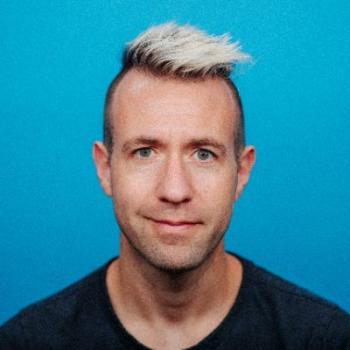 Nonreligious
Christian Rocker Steingard Loses His Faith; What of...
A Tippling Philosopher